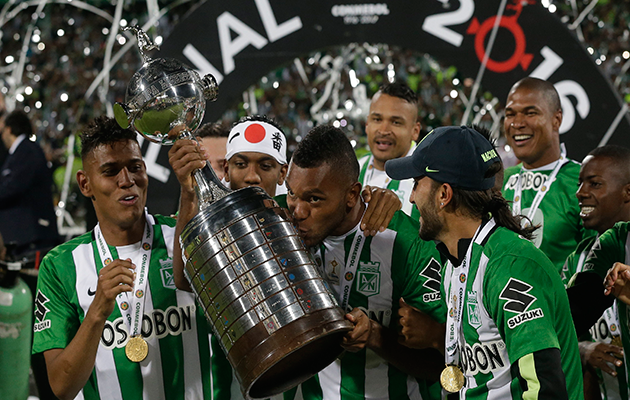 “If the seven year Argentina/Brazil monopoly is to end,” said World Soccer’s Copa Libertadores preview, “Colombia could provide the team to do so… The standout side are domestic champions Atletico Nacional…. The club will go into the competition believing a repeat of their 1989 triumph is a genuine possibility.”

And so it proved. Nacional won the trophy with one of the most statistically impressive records in the history of the competition, despite having to re-invent themselves along the way.

The preview piece noted that coach Reinaldo Rueda had the task of replacing centre-back Oscar Murillo, whose pace was vital to the defensive unit. Soon after his move to Mexico, Murillo was successfully drafted into the Colombia side. He left a big hole. But it was well filled by Davinson Sanchez. The young centre-back is raw, and prone to the occasional error. But chivvied along by his defensive partner, captain Alexis Henriquez, he formed a barrier that conceded just six goals in 14 games.

Oscar Murillo was not the only loss from the team that won the Colombian league title last December. Mexican football claimed two other members of the starting line-up. Rueda had to say goodbye to the midfield dynamism of Yimmi Chara, and also to Jefferson Duque, his only top-class centre forward.

It meant that Nacional had to ease their way into 2016 still searching for a blend. Their early domestic football was a worry, with right winger Orlando Berrio clearly uncomfortable as a centre-forward. The solution came in the strong and versatile shape of Victor Ibarbo, signed on loan after a spell at Watford did not work out. The international midfielder had such talent, strength on the ball and understanding of the game that he could be improvised in a central striking role. Rueda sought to stretch the opposing defence with two wingers, permed from Jonathan Copete, Berrio, Andres Ibarguen and the Venezuelan Alejandro Guerra. And then Ibarbo and new sensation Marlos Moreno worked off each other through the middle.

But Ibarbo picked up an injury that kept him out of both legs of the quarter-final against Argentina’s Rosario Central – and it was here that Nacional faced their biggest challenge in the course of the triumphant campaign. They had enough depth in the squad to get them through – just – but it was a very close thing, with the club a couple of minutes away from elimination when Berrio scored a vital goal. Playmaker Macnelly Torres made a successful return to the side, but the lack of an out and out centre forward was clearly a problem – and another problem came in the six week break between the quarter and semi-finals.

Nacional lost experienced winger Copete, one of their top scorers in the campaign. And Ibarbo’s loan period came to an end, and he moved back to Europe. Without the benefit of any competitive games – the Colombian league was in its close season – Rueda had to rethink his side once more. A genuine centre-forward was brought in – Miguel Borja came in after a record breaking first few months of the year with Cortulua, and he immediately clicked – scoring five goals in four games as Nacional became continental champions for the second time.

But no sooner had they lifted the trophy than the winning side broke up. Marlos Moreno, whose first team debut came as recently as September, has played his last game for Nacional. His form had put him on the wish list of big clubs all over the world, and he has joined Manchester City, who have loaned him out to Deportivo La Coruna in Spain. Davinson Sanchez is also Europe bound, on his way to Ajax after just six months as a first-team regular. And international holding midfielder Alexander Mejia heads to Mexico. Others could follow.

Paraguay were interested in the services of Reinaldo Rueda – a logical enough choice, since he has national-team experience with Honduras and Ecuador as well as his native Colombia.  It seems, though, that Rueda will stay put. He has December’s Club World Cup to look forward to – but he will have to reinvent his team once more in the build-up to the tournament.