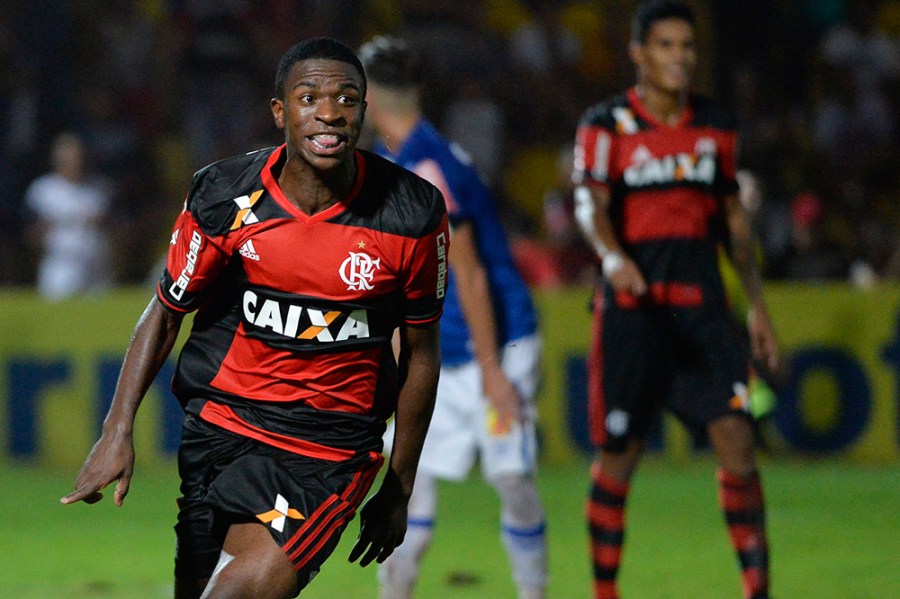 It was impossible not to feel sorry for Vinicius Junior as he played his first few minutes as a senior professional footballer.

A crowd of well over 40,000 went to Rio’s Maracana stadium to see local giants Flamengo take on Atletico Mineiro in the opening game of the 2017 Brazilian Championship. Flamengo have just won the Rio state title, and they face a crunch game this Wednesday in the Libertadores Cup. All this, and the match against Atletico, seemed to be overshadowed by the hope that Vinicius would come off the bench to make his first team debut.

As the teams were announced, his name and photo were greeted by the loudest roar – even bigger than that for Paolo Guerrero, the club’s star striker and one of the outstanding players on view in South American club football. And, Flamengo goal aside, the biggest cheer of the day came when it was clear that Vinicius was going to be brought on.

The game was all square at 1-1, and with stoppage time there were just over ten minutes to go.  Atletico had already made all their substitutions, but right back Carlos Cesar – the direct opponent of Vinicius, who likes to cut in from the left – was down and clearly injured. After lengthy treatment he was able to return to the pitch, but only to hobble around as an improvised centre forward. The scene, then, was set for a heroic debut, with the sort of instant impact that would make it clear why Real Madrid are apparently prepared to spend a fortune securing his services.

How on earth could a 16-year-old live up to that kind of billing?

The Real Madrid speculation has come on the back of the player’s performance in the recent South American Under-17 Championships. He certainly looked very impressive – full of sinewy skill, offering a consistent threat to the goal. But he was part of a team who were clearly better than the rest – at a level of football where many stars do not go on to shine at senior level.

A decade ago there was a similar fuss, at a very similar stage, surrounding attacking midfielder Lulinha, who had just given a masterclass in finishing in the 2007 South American Under-17s. He was instantly linked to all the European giants. And having broken scoring records in the youth ranks of Corinthians, he was hurriedly promoted to the first team.

Ten years later, his wandering, disappointing career has taken him to South Korea, where he plays for Pohang Steelers. He did not come remotely close to fulfilling any of the hopes that were built up around him.

Vinicius, perhaps, has two advantages. The first is that Flamengo 2017 are much better than Corinthians 2007. Lulinha was thrown in to the starting line up of a struggling giant.  Corinthians were fighting a battle against relegation, and the youngster was supposed to be the saviour. This was clearly insane – the 16-year-old Pele, for example, had the benefit of slotting into an outstanding Santos side when he first started, something which made it far easier for him to establish himself. There is no need for Vinicius to carry the Flamengo team, and no one is expected him to do so.

Secondly, Lulinha has clearly been unable to impose himself physically on senior football. Those around him grew taller and stronger, and his space on the field was crowded out. As a wide attacker, Vinicius should find space easier to find, and he may well develop into a more athletic player.

Nevertheless, he still had the look of a ballboy who had wandered onto the field in those ten minutes in the Maracana. He tried out some tricks, but nothing came off. After a miscontrol, a wasted cross and a misdirected back heel, the roars that greeted his early touches even gave way to a few groans at one point when he lost possession.

Nothing happened to send the big crowd home cherishing forever a memory of his debut. And that, surely, is at it should be. With all the changes a youngster at that age is going through – in body, in mind, in the quest for his own identity – it is surely too much to ask for him to be an instant senior sensation. Let him take things step by step. Real Madrid was not built in a day.