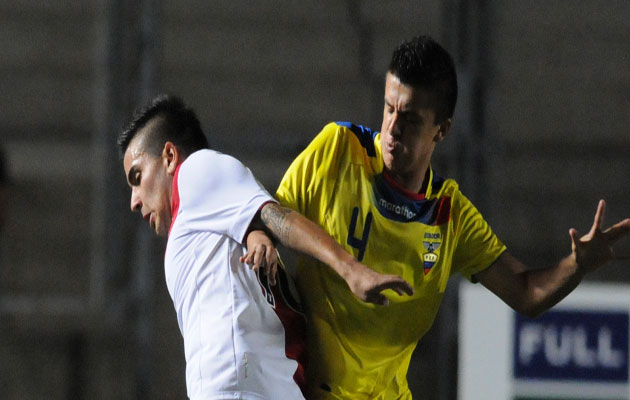 A chorus of boos greeted the entry of left footed attacking midfielder Victor Cedron when he came on as a second half substitute for Universidad Cesar Vallejo against Alianza Lima in the final of the Inca tournament, the first of the three stages of the 2015 Peruvian Championship.

Cedron, 21, is a Cesar Vallejo product, from the club’s hometown of Trujillo.  At the start of 2014 he moved to the capital to join Alianza, Peru’s most popular club.  But he struggled to live up to expectations and had a difficult relationship with the fans.  In the build up to the current season there were rumours that he wanted to leave.  Cedron, though, said that love for the club would keep him at Alianza – while he was in fact negotiating his return to Cesar Vallejo.

As fate would have it, these were the two sides that met in the final of the Inca tournament – and with the game taking place in Lima’s National stadium, Alianza fans made up a large majority.  Cedron would inevitably be a controversial figure in the game, and Cesar Vallejo coach Franco Navarro chose not to risk him in the starting line up.  But with 20 minutes to go left sided midfielder Ronald Quinteros pulled up with an injury, and Cedron was the natural replacement.  And so on he came to deafening whistles of disapproval.

Just four minutes later he had silenced the Alianza hordes.  The score was tied at 1-1. Alianza had gone in front, with Cesar Vallejo equalising before half time and now on top, but unable to transform superiority into a second goal – until a cross from the right flicked off an Alianza defender and fell perfectly for Cedron to power his diving header through the opposing keeper.  The team from Trujillo deservedly went on to score another goal and take their first national title.

Meanwhile a debut title was also won further south.  In neighbouring Chile Cobresal won their first crown, claiming the 2015 Clausura championship.  It was a nervy afternoon.  Cobresal, from the northern mining district of El Salvador, had to come from behind to win 3-2 at home to already relegated Barnechea – the last goal was a penalty from key centre forward Matias Donoso.  The three points were enough to take the title because closest rivals Universidad Catolica let a 3 goal lead slip at home to Deportes Iquique, and missed a late penalty of their own, allowing Cobresal to do a lap of honour with a round to spare.

The common link between the historical titles of Cesar Vallejo and Cobresal is probably that it is easier to win South American domestic leagues in the first half of the year, when the big guns are focused on continental glory with the Copa Libertadores.  True, this does not explain Vallejo’s win over Alianza, who were bundled out of the Libertadores in the qualifying round back in early February.  But it does help explain why better teams such as Sporting Cristal were unable to put up a stronger domestic showing.  Certainly in Chile Colo Colo buckled under the strain of trying to fight on two fronts.  At one point their place in the Libertadores knock out stage seemed assured.

But then they went down 3-0 at home to Santa Fe, and started picking up injuries.  Then they said goodbye to their domestic hopes with another 3-0 home defeat, this time to Universidad Catolica, and suffered more injuries, too.  They took a depleted squad to Belo Horizonte for the crunch Libertadores game away to those comeback specialists Atletico Mineiro of Brazil.  Colo Colo’s task was to avoid a 2 goal defeat, and they came 11 minutes from completing their mission.  But Atletico scored a stunning second, and Colo Colo barely had the strength to cross the half way line.

It means that, along with Peru and Venezuela, there is no representation from Chile in the last 16 of the Libertadores.  In the case of the other two countries, this is not a total surprise.  But for Chilean football this is very disappointing, especially as similar wipeouts occurred in 2013 and 2008.  The game in Chile has been through a financial restructuring, investments in stadiums have taken place and the national team is widely seen as the country’s best ever.  But the club sides are not punching this new weight at continental level.

There has been one recent exception – Universidad de Chile, who reached the semi finals of the Libertadores in 2010 and, in exhilarating style under Jorge Sampaoli, in 2012 as well.  Since then, though, ‘la U’ have suffered three consecutive first round exits.  This year’s, with five defeats in 6 games, was especially embarrassing.  Moreover, the club have been specialising in signing players who have been shining with other Chilean sides but have failed to show the same level of performance with their new club – a development which has weakened the league without strengthening Universidad de Chile.