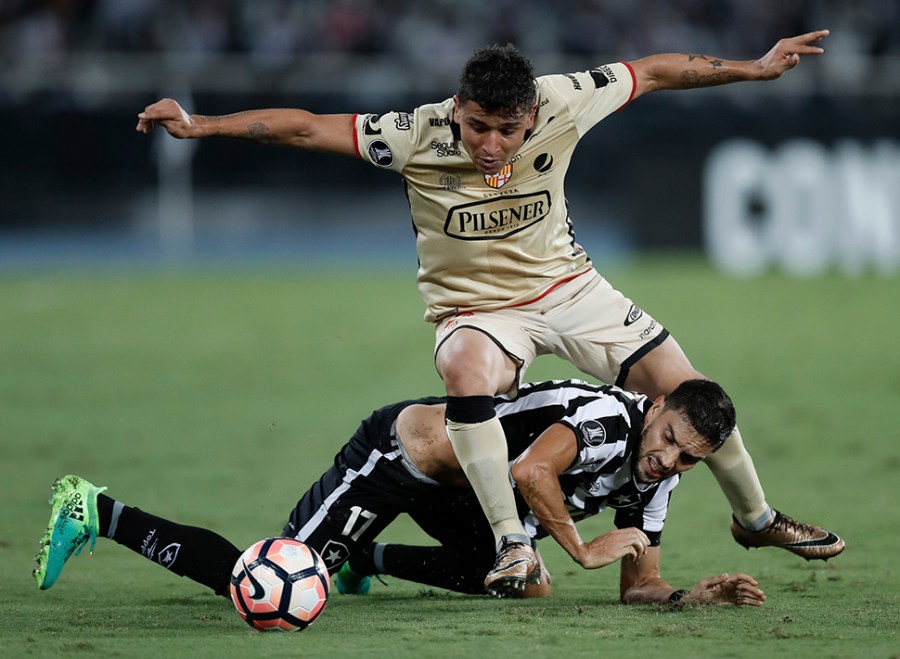 The first team to book its place in the knock out stages of the 2017 Libertadores Cup was Barcelona – without Messi, Suarez and Neymar but with ten points from four games.

Barcelona from Guayaquil in Ecuador were founded in 1925 with the participation of Spanish immigrants. Twice Libertadores finalists (1990 and 98), their recent record in the competition is poor. Since losing to Brazil’s Vasco da Gama in that 98 final, they have only once made it past the group phase, in 2004, when they promptly fell in the second round. So it was a big day for the club last Tuesday when they went back to Rio de Janeiro and sealed their place in the last 16 with an impressive 2-0 win against Botafogo.

The win was all the more notable since Barcelona were without some of their most important players; the two first choice wingers, Marcos Caicedo and Ely Esterilla, vitally important to a counter attacking side, were both injured, along with captain and senior central midfielder Mathias Oyola. Damian Diaz, the side’s Argentine playmaker was suspended along with centre back Jefferson Mena. The team, then, had to dig deep into their playing resources to overcome a Botafogo side that had been in fine form.

The Ecuadorian champions, though, had always looked like one of the sides capable of springing a surprise in this year’s competition. Their method of play is a simple one which has much in common with the way that the Ecuador national team have developed.  They look to attack quickly down the flanks. And in the absence of Caicedo on the left wing, Jose Ayovi proved a more than adequate replacement, scoring the early goal that defined the pattern of the game. And filling in for Diaz, Christian Aleman has been one of the revelations of the competition. Two weeks earlier he had announced his presence with a superb solo goal in the home game against Botafogo. Now in Rio until he tired in the second half he dictated proceedings with a maturity and a reading of the game that were impressive indeed from a 21 year old.

Barcelona’s domestic dominance last year was based – in addition to their pace on the counter – on a fine defensive unit. The best of the centre backs, Anderson Ordonez was sold to Germany, but a pair of 22 year olds did a sound job last Tuesday night. Dario Aimar looks classy and with Mena suspended Xavier Arreaga also had an excellent game against Botafogo. With just 2 goals conceded in 4 games, Barcelona – together with Nacional of Uruguay – have the best defensive record in the competition. And if they can maintain that level of solidity, then their threat on the counter attack will make them opponents to be feared.

The other Ecuadorian representatives in this year’s competition are Barcelona’s local rivals Emelec – who are involved in the only game in the Libertadores this week when they travel to meet River Plate of Argentina. River are the only side in the competition with a 100 per cent record, and will be strong favourites to pick up three more points and seal their place in the last 16.

That, of course, leaves one place available for the other three teams in the group, where Emelec’s main competitors are Medellin of Colombia – where playmaker Juan Fernando Quintero is picking up confidence on loan from Porto after an immensely promising career went off the rails.  The crunch game between the two sides takes place next Tuesday in Colombia – a meeting which will go a long way towards defining whether or not the city of Guayaquil will be providing two of the teams in the last 16 of the Libertadores.