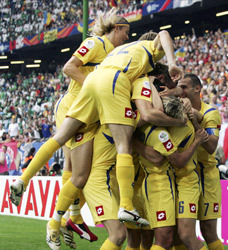 Ukraine strolled to an easy 4-0 win over Saudi Arabia to record their first ever win at the World Cup finals.

The victory puts the east European side in a good position to qualify for the knckout stages, and on this form, they will be a team many would like to avoid.

Ukraine coach Oleh Blokhin made four changes from the side thrashed 4-0 by Spain, with Serhiy Rebrov resuming his partnership with Andriis Shevchenko up front.

Vladyslav Vashchuk was suspended after his red card against Spain. Volodymyr Yezerskiy, Andriy Gusin & Ruslan Rotan were dropped to the bench, to be replaced by Maxim Kalinichenko, Andriy Vorobey and Oleg Shelayev.

Saudi Arabia skipper Sami Al Jaber was on the bench for the second successive game because of a thigh problem. Mohammed Ameen is included at the expense of Nawaf Al Temyat in a more defensive-minded midfield than the one that drew 2-2 with Tunisia in their opening group match.

It took just three minutes for Ukraine to erase the memories of their 4-0 defeat to Spain. Rusol was left unmarked at a Kalinicheno corner and the ball bounced off the defender and through the legs of Zaid.

Shevchenko almost added a second with a header from another Kalinichenko corner but the ball was cleared off the line by Ahmed Dokhi, only to fall to Rebrov who blazed over the bar from close range.

At this stage Ukraine were utterly dominant and it seemed only a matter of time before they extended their lead.

Rebrov made amends for his earlier miss when he fired a powerful drive effort from distance past the helpless Zaid. The keeper’s attempt to save the strike was doomed from the moment he lost his footing on take-off.

Voronin should have added a third when he was presented with a gift by Al Montashari, but the Bayer Leverkusen player fired wide from 18 yards.

Shevchenko, whose fitness had even been questioned by the Ukrainian president on the eve of the game, was barely involved in the first half, but his teammates had answered any questions about their own credentials with a composed opening 45 minutes.

Forty seconds into the second half, Shevchenko decided to get in on the act when he rose to head home Ukraine’s third from a pinpoint Kalinichenko cross.

At this stage, a rout looked on the cards, as the Saudi Arabians looked in danger of being completely overwhelmed by a vibrant Ukraine side.

After scoring a third Ukraine were content to sit back, and their relaxed attitude allowed the Saudis to string a few passes together and create some half chances. However, the prospect of them mounting a comeback looked remote.

For Ukraine, Kalinichenko, who had been the game’s best player, grazed the bar with a fierce left-footed drive from outside the box. The midfielder got his just reward when he was set up by Shevchenko, who unselfishly crossed for his teammate to fire into the roof of the net.

Shevchenko was able to milk the applause from the Ukrainian supporters in the ground, when he was substituted in the closing minutes. He had silenced his critics in emphastic style.

Although it is unlikely Ukraine will be fortunate enough to meet a team as weak as Saudi Arabia in their remaining games, this result will give them great heart for the rest of the competition.