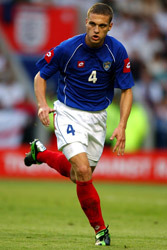 Nemanja Vidic says he never had any intention of leaving Manchester United, despite reported interest from Real Madrid this summer.

Vidic, 28, has long been linked with a move away from Old Trafford, and speculation intensified when a representative of the player said before the World Cup that they had “requested some time from United to think about things”.

However, United chief executive David Gill revealed soon afterwards that Vidic had verbally agreed a long-term contract to remain at Old Trafford and the defender says he had always wanted to stay at the club.

“I don’t know why people think it was a difficult decision,” he said.

“I always said I am happy here. I never spoke about my future. I know there was all this speculation but I never said I wanted to go. There was nothing new. I am very happy to be here.”