Players and coaches at Bulgarian first division club Lokomotiv Plovdiv have been told to take lie detector tests after their unexpected 1-0 defeat to struggling Botev Vratsa on Saturday.

Lokomotiv’s owner Veselin Mareshki said he had to be sure there were no other factors behind the team’s loss.

“Nobody is insured against defeats but this loss is very strange,” Mareshki said.

“The fair play principle is the most important thing for me and all players and coaches will take lie detector tests.”

Earlier this month, the Bulgarian Football Union (BFU) said a prosecutor has opened an investigation into claims of match-fixing in four domestic games this season.

Media reports have claimed match-fixing and corruption have been rife in Bulgaria for years, but no one has been brought to trial with the European Commission criticising the authorities for doing little to fight the problem.

“If you can no longer compete at economical level, you’ll have to look at other ways. You have to invest in the future. I find it scandalous that someone like [Marco] Verratti, who we have all seen play in Italy and know well, is playing abroad. We let him go. I would also have called him up for the national side if he was still at Pescara. I repeat: scandalous.”

Asked about the move of 19-year-old Marco Verrati to PSG, Italy coach Cesare Prandelli laments the failure of Serie A clubs to hold on to its brightest prospects.

It wasn’t costly, but it was a little embarrassing. Cristiano Ronaldo somehow failed to convert from just yards out after being set up by Gonzalo Higuain.

Concidentally, there has been speculation about the Portuguese forward’s relationship with Iker Casillas after the Real skipper did not celebrate Ronaldo’s penalty in Monday’s 2-0 win over Rayo Vallecano.

It was the second time in the space of a week that the Spanish keeper had failed to celebrate one of Ronaldo’s goals – the previous occasion being the winner in the 3-2 Champions Leaue win over Manchester City.

There have been whispers that some of Real’s Spanish contingent, including Casillas, revelled in Ronaldo’s defeat to their compatriot Andres Iniesta, at the recent UEFA Best Player in Europe award. Which would certainly explain Ronaldo’s recent ‘sad’ outburst.

However, Casillas was keen to play down talk of a rift between the pair and in the aftermath of Monday night’s victory, his Facebook page included an image of himself and Ronaldo smiling for the cameras. 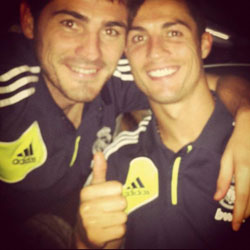 Head on the Blokhin

There’s obviously a shortage of top-level coaches in Ukraine. Dynamo Kiev have appointed Ukraine manager Oleg Blokhin as head coach, adding he would still lead the national team in their next two World Cup qualifiers.

Dynamo sacked coach Yuri Semin on Monday after losing four of their last five games including a 4-1 mauling by Paris St Germain in their Champions League opener earlier this month and a defeat to Shakhtar Donetsk in the Ukrainian Cup.

Blokhin, 59, was a striker for Dynamo in his playing days. He took over the national team just months before Ukraine co-hosted the Euro 2012 finals.

Blokhin will job share for the time being and will still be in charge of Ukraine for the next two World Cup qualifiers against Moldova and Montenegro next month.

Dinamo Zagreb have ordered defender Domagoj Vida to pay a 100,000 euro fine for opening a can of beer on the club’s bus on the way to a game.

“It was the most expensive beer Vida has ever had,” the Jutarnji List newspaper stated.

It was the most expensive beer anyone has ever had.

A quick search to find the world’s most expensive beer came up with a 12 litre bottle of Vieille Bon Secours, served at London restaurant Belgo and costing £700! The beer, which has been stored for the last 10 years and has an alcoholic volume of 8 per cent, requires at least 2 people to pour it and has been described as having a complex taste.

For £700 I’d expect a damn sight more than complexity from my beer.

Coach Ante Cacic immediately ordered Vida, 23, to leave the bus, which left on Monday for a cup game against lower flight side NK Vrsar later on Tuesday.

“The Dinamo management has decided to punish Vida, a Croatia international with 14 caps, with a financial penalty of 100,000 euros for his behaviour,” the club said on their website.

In August, Brazilian-born Dinamo midfielder Sammir was fined 270,000 euros for partying in a Zagreb night club on the eve of a Champions League qualifying match against Moldovan side Sheriff Tiraspol.

I don’t know how much these players are earning, but those amounts must represent a significant chunk of their annual salary.

Sampdoria boss Ciro Ferrara has spoken of his dislike for Zdenek Zeman ahead of Wednesday’s game against Roma.

“During my 20 years as a player he has made statements that have damaged the image of myself and my club at the time, Juventus,” Ferrara stated.

“For this, and because of the hard work my teammates and myself put on the pitch during that time, I can’t accept him.”

Roma boss Zeman is famous in Italy for his continual attacks on Juventus, for whom Ferrara appeared for, in the 1990s and 2000s. At the heart of his claims are that members of Juve’s hugely successful side of the mid-1990’s were being administered steroids by the club’s medical staff.

Last week we brought you footage of Liam Gallagher celebrating Manchester City’s opening goal at the Bernabeu and now here’s his brother, Noel, purportedly watching last season’s title decider against QPR in Chile. I say ‘purportedly’, because this beautifully filmed clip film at a stylish Chilean bar, has a staged feel about it – and not just because of the highly improbable climax.

Next week we’ll bring you footage of Bonehead at Boundary Park, Oldham.

In for the long haul

Real Madrid’s Jose Mourinho has hinted that he is planning to emulate Sir Alex Ferguson at Manchester United by continuing to coach until he is in his 70s.

Mourinho turns 50 in January and says he loves football so much that he can envisage spending another 20 years in the sport.

“I understand perfectly why Alex is still in the job (at the age of 70) and I think I will be the same,” the Portuguese told Sky Sports Television.

“I love football so much, I love coaching so much. I will still be very young when I become 50 and I believe I have a lot in front of me.”

“Fifty is a number with a certain impact – it’s a number I believe sometimes has a psychologically negative impact on many people because they realise the world spins very, very fast and our lives are very, very short.

“It’s a number that makes me think and look back but also look forward too. I’m such a happy person because what I have done so far I think is amazing.

“I look back and reflect on this and have to be thankful for what God gave me, the only coach to win the top three leagues in European football with Real, Inter and Chelsea.

He couldn’t resist slipping that little nugget in, could he.

He concluded: “But at the same time I look forward and I feel myself better than ever, stronger than ever, with more experience and I think I’m still at the beginning of my professional life.”

Which is bad news for Sergio Ramos.

Incidentally, the Real defender admits he has no idea why Mourinho dropped him for last week’s Champions League game against Manchester City,

“I don’t know whether the decision to drop me against Manchester City was a punishment. These things are coaching matters,” the defender was quoted as saying by AS.

“I’m talking about Real Madrid and what’s in my blood. I will not discuss things that happen within the club.

Schalke’s Julian Draxler has come under fire from his teammates for behaving selfishly when squandering his side’s best scoring opportunity against Bayern Munich in their Bundesliga clash on Saturday.

With the match level at 0-0 in the 50th minute, Schalke had a clear chance to score on the counterattack but Draxler failed to play in Klaas-Jan Huntelaar. Minutes later Bayern were ahead and went on to win the game 2-0.

As a result, Draxler’s team-mates have been queuing up to lay the boot in.

“Julian could not get the ball under control. It was disappointing that we did not make more of it,” said Huntelaar.

Midfielder Roman Neustadter weighed in with his thoughts.

“That piece of play took us out of our rhythm,” said Neustadter.

Germany international Lewis Holtby, who clearly enjoys kicking a man when he’s down, said the Draxler error was the turning point of the match.

“If we do more there, the game may have looked differently. Three minutes later Thomas Muller scores and the game was over for Schalke,” he added.