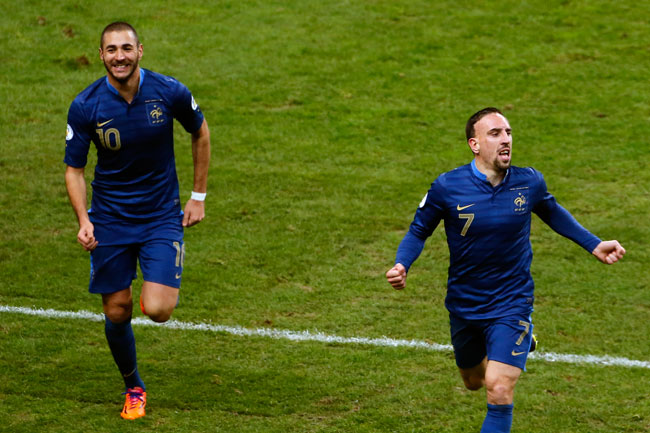 The French judge ruled there was insufficient proof the men knew that Zahia Dehar, now 21, was a minor at the time. The case has been hanging over the players since July 2010, when a French judge issued preliminary charges against them.

The sense of relief was tangible for Ribery’s lawyer, Carlo Alberto Brusa, who was in tears as he phoned the France international to tell him of the verdict.

“When you experience moments like that you get goose bumps, as he told me himself,” Brusa told The Associated Press when asked how Ribery felt upon hearing the news. “He has an extraordinary character, and he’s someone I respect a lot. I think it’s a victory, a victory for justice.”

The two footballers had faced up to three years in prison if found guilty.

Dehar alleged Ribery flew her to Munich as a birthday present to himself in 2009 when she was under 18. She says she lied to the players and told them she was an adult.

Although Ribery has admitted to having sex with Dehar, he claims he did not pay her and that he did not know she was a prostitute or a minor at the time.

“We did a lot of work, serious work analyzing the file to establish the fact that there was no proof (that Ribery knew she was underage),” Brusa told the AP.

Prostitution is legal in France, but while the legal age of consent in France is 15, for prostitutes it is 18.

Benzema’s lawyer Sylvain Cormier said he “could feel all the weight coming off, it was morally very trying.”

Cormier called the verdict “the end of a nightmare” for Benzema. “It was very painful for him. He’s a strong person, he really ipressed me. Four years is a very long time.”

Benzema is alleged to have paid 500 euros to have sex with Dehar in May 2008, the night he won the French player of the year award playing for his former club, Lyon. Dehar was 16 at the time.

Ribery is alleged to have had sex with Dehar three times — including at the home of Kamel Ramdani, 39, Ramdani, who was sentenced to five months in jail and fined 5,000 euros after an investigation into a suspected network of prostitutes operating out of a nightclub called “Zaman Cafe” on Paris’ Champs-Elysees.

Ms. Dehar has certainly taken advantage of her brush with fame (or infamy). In 2012, in collaboration with fashion designer Karl Lagerfield she created a line of lingerie and a self-named perfume. One must applaud her initiative and entrepreneurial skills, whilst wondering who on earth would choose to wear a scent associated with an underage prostitute.