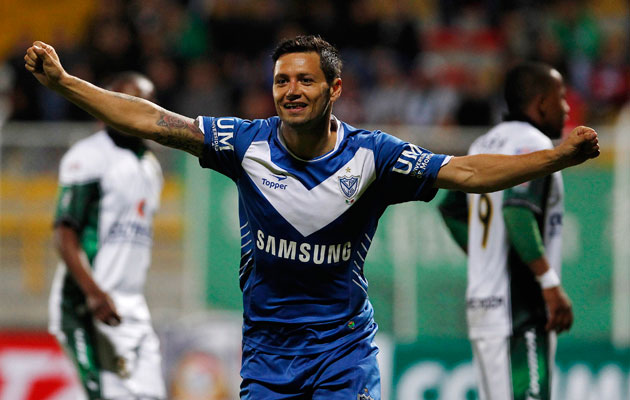 Fans of the Premier League, cast your minds back to April 12th, 2008. It was the day that Mauro Zárate truly caught the attention of English fans, following up goals in March against Reading and Manchester City, with a sumptuous free kick to equalise late on against Everton for relegation threatened Birmingham. Zárate’s brief cameo in England’s second city was just one of several unusual stops in what has been an intriguing, frustrating and often perplexing career.

Having started life in his native Argentina, Zárate was always destined to be a footballer, coming from a family with real sporting heritage. His Chilean father turned out for Independiente, his brothers, Ariel, Sergio and Rolando played for Malaga, Nuremburg and Real Madrid respectively during points in their careers.

It was no surprise then when Zárate showed an aptitude for the family trade at an early age, quickly outgrowing the age groups at Velez Sarsfield to make his debut for the first team at just 17. It was a club for which his brother had made well over 100 appearances and scored 50 goals.

If Zárate felt the burden of expectation, he did not show it. He played a part-time role in Velez’ capture of the 2005 Clausura as a teenager, before hitting 19 goals to share the title of top goal scorer for the Apertura with now Inter  striker Rodrigo Palacio in the 2006-7 season, his first as regular starter for Velez, and also his last for the club before moving abroad.

In the same year in which he was making headlines domestically for his goal scoring form, he earned global recognition, winning the FIFA under-20 World Cup with Argentina in Canada. It was team-mate Sergio Agüero who stole the limelight, earning the both the competition’s Golden Ball and Golden Shoe awards for best player and top scorer, as well as a place in the All-Star team.

Nevertheless, Zárate stood out at the tournament in and amongst future world stars including Arturo Vidal, Angel Di Maria and Gerard Piqué as a talented young forward, notching a goal in the final against the Czech Republic. Zárate’s future seemed well laid out for him, an oft trodden path taken by Argentinian players of shining domestically before jetting off to the big lights of Europe.

It was at this point that Zárate’s career took one of several unusual terms. The in-demand forward ignored advances from European sides, and the option to continue to forge a reputation at home, in order to make the move to Al-Sadd of Doha, Qatar.

This initially puzzling move is perhaps explained by the careers of his brothers, in particular Sergio. Although Rolando had a brief spell at Madrid, none of the Zárate brothers ever made it at a huge club. With Sergio acting as his agent, the move to Al-Sadd came with a reported fee of around £13 million and a lucrative contract, setting Mauro up financially. This Middle Eastern sojourn was to be short lived however, with Zárate making only 6 appearances for Al-Sadd, in which he still managed 4 goals.

Unusually then, Zárate made his debut in Europe in a defeat to Sunderland for a desperately struggling Birmingham. Not the most exotic locations for a silky skilled, fleet footed Argentine attacker to announce himself. Despite this though, and even though Zárate was unable to fire Birmingham to safety, a handful of impressive goals in just over a dozen appearances left him with no shortage of suitors.

Zárate’s next step was to a more suitable stage for his abilities, the Stadio Olimpico in Rome, the Eternal City and home to Lazio. On an initial loan, Zárate immediately set about impressing at Lazio, leading owner Claudio Lotito to label him “better than Messi” and endearing himself to the fans with a goal on his debut, followed by another in a derby victory over Roma, and another in the Coppa Italia final against Sampdoria.

It was the start of a genuine love affair between Zárate and the Lazio ultras. On the field he continued to delight with his skilful play and eye for goal, finishing the season with 16 in all competitions; off it he mocked hated rival Totti, and even watched matches he wasn’t involved in with the fans, a practice that would result in much controversy in 2010.

During a loss to Bari, Zárate was pictured making a Nazi salute, an incident for which he would preposterously claim ignorance of who Hitler or Mussolini were and that he “did not realise the significance of his gesture”.

His performances on loan were enough to convince Lotito to stump up approximately £17 million for Zárate to buy out his contract, an arrangement that would later surface as yet another of many controversies that plagued his career.

The good times at Lazio didn’t last for Zárate. For all of the positives, Zárate faded in his first season, revealing a selfishness to his game that although not an issue when he was firing, became problematic when he was off his game. Unfortunately, it was this Zárate and not the one that had made such a good first impression that returned to preseason the following year.

The new coach, Davide Ballardini was not as patient with Zárate as his predecessor Delio Rossi, and publicly criticised his player for his selfishness with the ball, a trait has seen Zárate chastised by coaches since his days as a youth player. One particularly notorious incident whilst still at Velez, saw Zárate come off the bench, having been left out for too often opting to go alone rather than pass. Zárate beat numerous players, rounded the keeper, but refused to score, betraying a petulance and immaturity that would rear its head at Lazio.

With Lazio fighting at the wrong end of the Serie A table and Zárate struggling for form in a season which he only notched 3 goals in the league, things finally came to a head in January. Zárate had returned to Argentina early before the official Serie A winter break without permission in December, Ballardini was outraged and made his feelings known to the press.

Unapologetic, the reaction from the Zárate camp was for Sergio to demand that Ballardini be given the sack, or else Lazio would face losing Mauro: “Lotito will have to decide who goes”. Lotito stuck by his big money, mercurial forward and Ballardini was relieved of his duties on February 10th, 2010.

Unfortunately for Lazio and Lotito, Zárate didn’t get on much better with Ballardini’s replacement Edoardo Reja. Zárate began to gain weight and his form became more sporadic, despite 9 goals in the 2011-12 season, Zárate’s moments of brilliance became less frequent. Earlier in 2010, Zárate had cost Lazio and Lotito yet more money. Lazio were ordered to pay solidarity payment to Velez Sarsfield, fees that the club believed they had avoided by giving Zárate the money to buy out his contract at Al-Sadd rather than pay the club a transfer fee.

Zárate had always been a luxury item, but now he was an underperforming luxury with dramatically declining economic worth. Lotito finally decided to cut his losses and sell his prize possession. However, Zárate’s reputation as a troublemaker preceded him and potential suitors balked at Lazio’s valuation. Eventually a loan move to Inter was arranged with the option for a £13 million permanent transfer.

With just 3 goals and 3 assists during his spell with Inter, Zárate returned to Lazio with yet another chance for a fresh start, with a new manager, Vladimir Petković. However, once again Zárate fell out with the hierarchy at Lazio and found himself frozen out, in part by choice. Rumours surfaced that Zárate had refused call ups to Lazio squads, unhappy sat on the bench, a place he has avoided his entire career. Zárate began angling to leave the club, clamouring for a transfer termination.

After a deal with Dinamo Kiev fell through, Zárate and his brother began claiming that Mauro’s contract had been breached by denying him the right to play football. Lotito and Zárate have both blamed each other for the transfer falling through, Lotito arguing that it was a contractual issue between Zárate and Dinamo, and Zárate arguing that Lotito demanded more money after a fee had already been agreed.

It is worth noting that Lotito and Lazio have previous in regards to this issue. In 2009, Zárate’s then colleague Goran Pandev announced his desire to leave Lazio and was consequently frozen out of the club for months by Lotito.

Once a move to Zenit St Petersburg was scuppered by differing valuations of the player, Pandev moved to have his contract terminated, with Lazio eventually having to pay the Macedonian for emotional distress. Pandev then of course went on to win the treble with José Mourinho’s Inter.

Whether Lotito does unfairly treat his players, or just has a penchant for signing troublemakers is up for debate. However, in the case of Zárate, it is certainly feasible given the players track record for misbehaving that he played a role in the collapsed deal with Dinamo Kiev.

In July, Zárate finally got his way, ignoring overtures from Sunderland and Tottenham to sign for former club Velez Sarsfield. Early in July, Zárate took to Twitter to declare “From now on I’m free, finally I can go and play elsewhere”.

Although disputing reports stated at the time that Zárate was still under contract at Lazio, it would appear that his move to Velez was legal. Zárate has rediscovered his form since his return to Velez.

Replacing Fernando Gago as the big name in the dressing room, Zárate is free to indulge his selfish desires and has hit 15 goals so far, leading the way in the Torneo Final stage of the Primera División with 9.

However, Velez have struggled this season regardless. Having won the Primera División last term, Velez have found it hard without Gago and last year’s top scorer Facundo Ferreyra. They finished 3rd in the Torneo Inicial, but have suffered their traditional Torneo Final slump, currently sitting 8th.

Upon leaving Lazio for Velez, Zárate thanked the fans and declared that “I have always given my all to the Lazio shirt.”

It is a patently untrue statement, between weight gain, nights out, on pitch selfishness and constantly resisting ever being a substitute, during his time at Lazio it is obvious Zárate played for himself.

Unfortunately for Lotito, Zárate is not better than Messi, and cannot afford to show so little disregard towards playing for the team. There is no doubt that on his day, Zárate is a pleasure to watch and if he could just resist that little voice inside his head that tells him to take on just one more man, or shoot rather than pass, he has all the qualities to be a top player.

At 27 years old, Zárate should be at the peak of his powers theoretically, and on just a two year contract at Velez, if he can maintain the form he is currently in, he will get another chance in Europe. Zárate could still have the career that beckoned to him when he was younger, but will need to convince the world that his petulant ways are behind him if he ever wants to be more than just a big fish in a small pond.