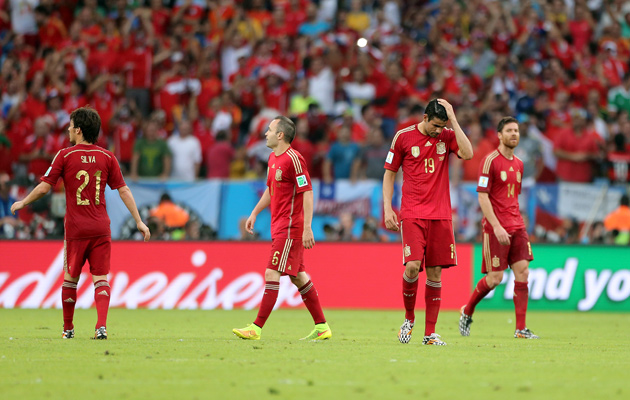 We’ve taken the first step,” said Vicente Del Bosque after Spain returned to competitive football with a 5-1 victory over Macedonia to start their defence of the European Championship they won in 2012 and 2008. The coach described this as a “new era”, but the new Spain looked quite like the old Spain – the successful one.

Following a disastrous World Cup, the aim is not so much to reinvent themselves as to re-find themselves.

The Macedonia game, at Levante’s Ciutat de Valencia stadium, was a decent start. “Spain recover their style and their belief,” ran the headline on the front page of sports daily AS the following morning, while Marca welcomed “the Spain we want”.

Brazil 2014 was always likely to be the end for the most successful generation in Spain’s history – the most successful generation in international history, in fact. The hope had been that they would bow out in triumph, with a fourth consecutive title – and in a country that carries a special footballing attraction. Instead, the world champions were the first team knocked out. Beaten by Holland and Chile, it was over almost before it had started; the game still to play, against Australia, rendered meaningless.

They won that 3-0 and left for home. Trudging off the Arena da Baixada in Curitiba with their heads down, few of the players spoke and many would not be back again. They knew this was the end.

David Villa scored the opening goal and left in tears. He had been annoyed to be taken off early, with Del Bosque later admitting he had not been aware of the significance of the match for Spain’s all-time top scorer. It was fitting Villa should go with a goal and, despite his irritation, there were words of gratitude afterwards. He did not announce his international retirement but accepted the time had probably come.

And he was not the only one. Xavi did not speak; he had been a silent presence throughout the tournament. It was not the way he would have wanted to go. Perhaps the most important player in Spain’s international history, he spent his final game on the bench. At the end he headed straight down the tunnel, not looking back. He soon announced his retirement.

Xavi’s importance could be seen in the overwhelming response from team-mates as Xabi Alonso followed suit. They took the option to go, while others quietly had the decision taken for them.

When Del Bosque named his squad for Spain’s first games since the World Cup – a friendly in Paris and the Macedonia qualifier – there was no Xavi, Alonso, Villa or Fernando Torres. Between them, they had 454 caps. Reserve goalkeeper Pepe Reina, who had won 33 caps, was also omitted.

In all, eight of the Brazil squad were left out and some won’t be back. Gerard Pique, struggling for fitness, asked not to be called up. Javi Martinez was injured too but will certainly return. Andres Iniesta was included but later pulled out with an injury.

Juan Mata was left out, which seemed curious given his age and that he could hardly be blamed for the failure in Brazil, but a good season at Manchester United might see him recalled. United team-mate Ander Herrera is another who, having been successful at under-21 level, will be in the coach’s sights this season.

Herrera has not yet played for Spain. The same was true of Dani Carvajal, Paco Alcacer, Raul Garcia, Mikel San Jose and Kiko Casilla, all of whom were included in the first squad of the new era. Marc Bartra and Ander Iturraspe had one cap each. Then, when Diego Costa was forced to pull out injured, Barcelona’s 19-year-old Munir El Haddadi won a first call-up.

Del Bosque admitted he had partly called on El Haddadi for convenience. The striker was training with Spain’s under-21s at Las Rozas, just above the first-team pitch. He didn’t have far to go…even though he had come a very long way.

El Haddadi’s parents came to Spain from Morocco, settling in Galapagar, north-west of Madrid, before Barcelona picked up their son when he was about to join Osasuna. Bringing him into the first-team squad and giving him minutes against Macedonia ensured Spain will not lose him to Morocco in the future.

Valencia striker Alcacer, who scored the second of Spain’s five goals, had only recently turned 21 and said afterwards: “This is just too perfect.” It was tempting to conclude that, stylistically, he is a better fit for Del Bosque than Chelsea striker Costa, thanks to his clever movement in tight spaces and an ability to reach the near post before defenders.

The position of striker has been a constant headache for Spain. Good players have come and gone – Torres, Alvaro Negredo, Roberto Soldado, Michu, and, to some extent, Costa – and it has always felt as if, Villa aside, they do not entirely convince Del Bosque. But Alcacer did convince, and so did Spain. Yet this was not a revolution.

Without Xavi and Alonso the midfield will, inevitably, evolve. This is the biggest challenge they will face. Atletico Madrid’s Koke is, for now, in Xavi’s role although there will be competition from – or perhaps a partnership with – Thiago Alcantara when he is fit again.

Del Bosque has slowly changed things throughout his tenure, albeit normally in the squad rather than the team. El Haddadi was the 47th player to whom he has handed a debut, and of the starting XI against Macedonia, only Koke and Alcacer represented a really significant break from the familiar-looking Spain.

David De Gea replaced Iker Casillas in Paris but the captain was back against Macedonia for his 157th cap, despite the doubts about his form. Sergio Ramos chipped in another Panenka penalty on his 122nd appearance, and alongside him was Raul Albiol, rarely first choice but with 49 caps going back almost eight years. Cesc Fabregas was playing for the 93rd time and David Silva, on 87 caps, played a central role in the absence of Iniesta.

“People question it at the slightest sign of problems but the style shouldn’t be touched,” says Silva. “Bit by bit we’re getting to know each other and we have started well.”