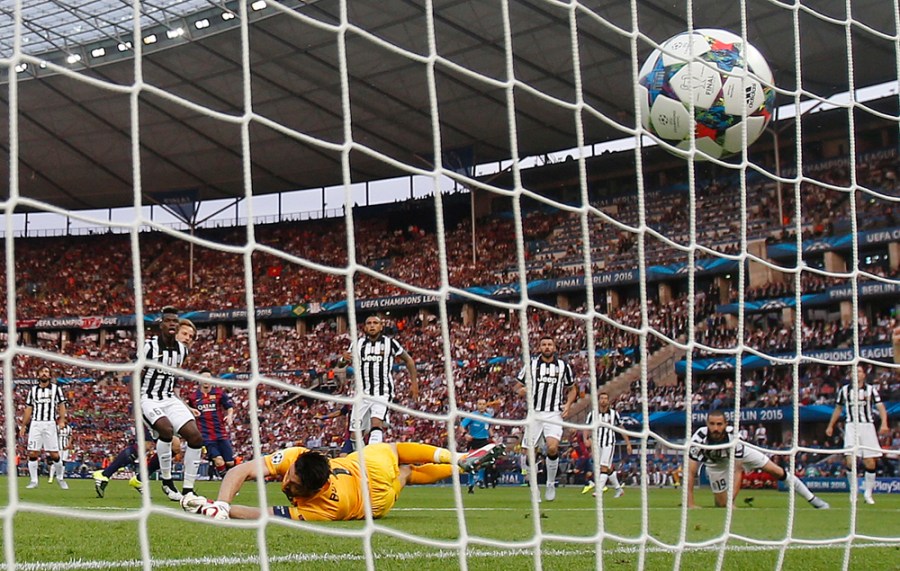 On the eve of Juve’s mouthwatering Champions League quarter-final, first leg clash in Turin with Barcelona on Tuesday night, experienced Juventus defender Leonardo Bonucci has sounded the battle cry.  In an interview with Turin daily La Stampa, Bonucci says that no Italian team would have lost 6-1 to Barcelona in the manner of Paris Saint-Germain in their second round clash last month.
As Juventus prepare for a re-run of the 2015 Champions League final in Berlin, won 3-1 by Barcelona, Bonucci points to Juve’s defence as one of the potential keys to this tie, saying: “In European competition, you come up against fantastic teams, full of class players, but sometimes they are not as well organised in defence as Italian teams. No Italian team would have lost 6-1 [against Barca]. I suspect if PSG were to replay that game one hundred times, they wouldn’t lose like that.
“I am sorry for them but they got into a total panic, having thought that the 4-0 win from the first leg would see them through.”
Asked about that Berlin final two years ago, Bonucci says that he has never looked at at the game again, adding that he only reviews the games he has won. However, he argues that the current Juventus is a different side from that of two years ago, saying: “By comparison with 2015, we have lost a bit of athletic and physical bite in midfield without guys like Pogba and Vidal, however the quality of our game has improved. Maybe there will be a different result this time because we have a better defence and maybe, Barcelona, great side that they are, are just a shade less strong than they were.”
As a central defender, Bonucci has plenty of respect for Barca’s star studded front line of Messi-Suarez-Neymar, saying:  “All three are amongst the top ten in the world.   Everybody is going to have to work hard and cover back.   Their stats show just how good they are, it just requires one flash of talent from one of them.
“Mind you, if we are talking top ten, the we too have top ten players in [Argentinians] Higuain and Dybala.”
Bonucci does not say it but the entire Juventus camp feel that this just might be a good moment to be facing Barca. The two clubs come into this game on the back of radically different recent form.  Juventus are currently top of the table, six points clear of second-placed AS Roma and seemingly headed for a 6th consecutive Serie A title.
Last week’s 1-1 away league draw with Napoli just about wiped out the last remaining obstacle on the road to the title, whilst even a 3-2 Italian Cup semi-final, return leg defeat by Napoli in their second encounter in four days on Wednesday did not stop them from reaching their third consecutive Italian Cup final (they have won the last two).
Last Saturday, Juve cruised past Chievo, winning 2-0 to maintain their control of the table. Furthermore, those recent games suggested Juve’s €90 million dollar wonder man, Argentinian Gonzalo Higuain, is finding his best form at just the right moment, since he scored a double in the Cup tie with Napoli as well as another double against Chievo on Saturday night.
By comparison, Barca have lost twice in the last month in the Liga, beaten first by Deportivo La Coruna and then last Saturday, going down 2-0 to Malaga. In the league, Barca now trail leaders and eternal rivals Real Madrid by three points.  With “El Clasico” due in Madrid in two weeks’ time, Barca clearly have got it all to do if they are to win this year’s title.
For at least one player, Tuesday night’s game should be very special. The 33-year-old Brazilian full-back Dani Alves comes up against his old club for the first time since leaving Barcelona last summer. Assessing Barca two months ago, he was less than tender, saying: “It was a touch of class to leave Barcelona on a free transfer. All through the last three seasons, I kept on hearing that I would be one of the players to be sold but the club directors never said anything to me, they were dishonest… and they didn’t have respect for me.”
Sounds like Alves will not be granting too many favours to his old club. As of now, Alves is likely to feature at right-back in a back four which also features Bonucci, Chiellini and Brazilian Alex Sandro. As of now, too, Juventus coach Massimiliano Allegri is in the happy positon of field his strongest side, whereas his counterpart, Luis Enrique, will be without at least one normal first choice selection in influential central defender, Gerard Pique.
PROBABLE TEAMS:
JUVENTUS: (4-2-3-1) Buffon; Alves, Bonucci, Chiellini, Alex Sandro; Khedira, Pjanic; Cuadrado, Dybala, Mandzukic; Higuain
BARCELONA: (4-3-3) Ter Stegen; Roberto, Pique, Umtiti, Jordi Alba; Rakitic, Mascherano, Iniesta; Messi, Suarez, Neymar