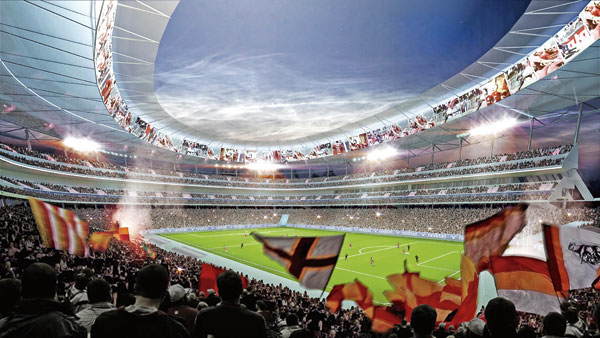 Building anything new in Rome is never an easy proposition. After all, the ruins of ancient Rome tend to represent an intimidating architectural reference point, while the lengthy bureaucratic procedures of the modern city discourage many.

And things are worse still if, like Serie A club Roma, you opt to build a new stadium in the city that houses arguably the most charismatic arena on the planet, namely the Roman Colosseum.

For all those reasons, then, it remains to be seen if and when the club will realise their hugely ambitious, €1billion project to build their own stadium in time for the 2016-17 season.

At a mid-March launch in the city hall, the media were treated to a sparkling  presentation of the planned new stadium. Not only was club captain Francesco Totti there to talk enthusiastically about the project, it also fell to the mayor of Rome, Ignazio Marino, and Roma’s American president James Pallotta to unveil the de rigueur plastic model of the Eternal City’s latest wonder.

With a capacity of 52,500 the largely steel-and-glass structure is intended to be a “state of the art” arena which combines 356-days-per-year modern amenities and technology with an “intimate” pitch, allowing Roma fans to sit right on top of the action. Due to be built in the south west of Rome at the site of the former Tor Di Valle racecourse, the new stadium is just six kilometres from Fiumicino international airport.

Part of the plan envisages the construction of a “training and wellness” facility next to the new stadium, along with shops, restaurants, bars, a Nike Superstore and a Roma Hall of Fame. Importantly, the project does not involve any residential building – something that inevitably leads to endless polemics and controversy, if not litigation, in modern Rome.

While all of this may sound fine and dandy, there are a number of unresolved issues linked to this ambitious project. For a start, Pallotta was unable to provide a detailed financial plan for the good reason that one has not yet been finalised.

And while the stadium itself is expected to cost €300m, the necessary work around it relating to transport requirements could cost another €700m. Given that the stadium will be situated just off the city ring road, it will be difficult to access for many city-based fans. Ironically, it will be much easier for those fans who fly in via Fiumicino.

All of which means new roads, perhaps a new bridge over the nearby Tiber and almost certainly an extension of the railway line as far as Tor Di Valle will all be required to ensure that 50,000 fans can easily get in and out of the new venue.

Roma claim that they will be footing the bill for all of this while Marino warned that until such time as all the various infrastructural works required by city hall are completed, the stadium will not be allowed to open.

Rome has, of course, been here before. In September 2009 the club’s president at the time, Rosella Sensi, presented her plans for a new stadium which looked suspiciously similar to Munich’s Allianz Arena and was also due to be situated in south-west Rome. In 2007, Lazio president Claudio Lotito threatened to build a new stadium at Valmontone, some 25 miles south of the capital. In more recent times, Lotito has moved his proposed site much closer to the city but has yet to finalise any definitive project.

There is no guarantee that Roma will succeed now where they – and Lazio – have failed before but they, and other clubs who follow, may be helped by legislation introduced by the recent Enrico Letta-led government which excludes residential development being linked
to the building of a new ground, thus reducing the bureaucracy involved.

The Roma development may prove to be a watershed moment for Italian football. Following the successful example of the new Juventus Stadium in Turin, most critics would agree that new club-owned stadia to replace decrepit, fan-unfriendly, local authority-run grounds are vital for the Italian future.

It could be that the United States’ “can-do” drive and energy will pave the way for Italian football. Pallotta argues that the new stadium is a step down the road to making his club one of the “top three in the world”. That is a tall order, but what seems certain is that a new Roma stadium will breathe badly needed new funds and energy into Serie A.