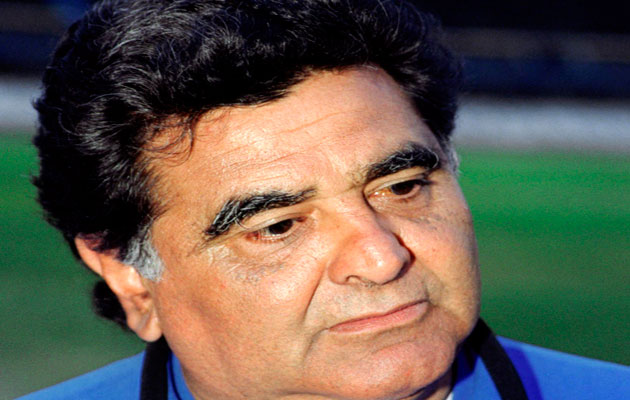 There are very few figures in world football who have enjoyed managerial careers just as successful as their playing days. Uruguayan Luis Alberto ‘El Negro’ Cubilla enjoyed a hugely successful playing career, representing Barcelona, River Plate and Uruguay’s traditional big two Nacional and a Peñarol, winning four Uruguayan Primera Division titles with both clubs and a Copa Libertadores with each.

El Negro, a winger who represented Uruguay 38 times between 1959 and 1974, was also part of the unstoppable Peñarol team of the early 60’s, winning the first two editions of the Copa Libertadores in 1960 and 1961 respectively. Cubilla moved into managing after he announced his retirement in 1976. Throughout his managerial career he took charge of South American giants such as Atlético Nacional, Peñarol, Racing, and Newell’s Old Boys, but it was with Paraguayan powerhouse Club Olimpia where he truly left his legacy.

Born in Paysandú in Western Uruguay, Cubilla’s first managerial job was with Olimpia in 1979, a year which would became arguably the greatest in the club’s glittering, trophy-laden history. Ironically, it was Cubilla who scored the decisive goal when Peñarol defeated Olimpia 2-1 over two legs to win the inaugural Copa Libertadores in 1960, when he netted an 83rd minute equaliser at the Estadio Manuel Ferreira in Asunción. He would soon endear himself to the Decano faithful though, leading the club to the Paraguayan Prímera Division title in his first year in charge.

However it would be the 1979 Copa Libertadores that would ultimately be El Negro and Olimpia’s finest hour.  El Decano qualified quite comfortably from a group also containing Bolivian clubs Bolívar and Jorge Wilstermann as well as fellow Paraguayan club Sol de América. Olimpia only dropped points in the group phase when they succumbed to Bolívar 2-1 in La Paz, and qualified for the final after finishing top of the second semi-final group containing Brazilian side Guarani and Chile’s Palestino. Cubilla’s troops would now face reigning Libertadores champions Boca Juniors in the final, managed by Boca icon Toto Lorenzo.

Olimpia blew Boca Juniors away in the first half an hour at the Estadio Defensores Del Chaco in front of over 50,000 delirious fans, scoring twice, courtesy of Paraguayan international Osvaldo Aquino after just two minutes and Uruguayan Miguel Ángel Piazza just before the half hour. The match finished 2-0, and Cubilla’s men would eventually hold Boca to a scoreless draw at La Bombonera in the second leg in an ill-tempted affair to be crowned the first Paraguayan champion of the Copa Libertadores. El Negro now had the honour of winning the Libertadores as both a player and manager, and would further enhance his reputation by leading Olimpia to glory in the Intercontinental Cup later that year, beating European Cup finalists, Sweden’s Malmö, 3-1 over two-legs.

Olimpia were now world champions, and with nothing left to prove, Cubilla left to manage Newell’s Old Boy’s a year later. The former Peñarol star returned to Olimpia again in 1982, after short spells in Argentina and at Peñarol in his homeland, leading El Decano to yet another Prímera Division title. After departing the club again the same year, Cubilla would not return to Olimpia for another six years, until he was once again appointed manager of the Asunción giants in 1988. Success immediately followed after the return of El Negro as manager, as El Decano won the Paraguayan Prímera again in 1988 and 1989 respectively and also managed to embark on an impressive run to the final of the 1989 Copa Libertadores.

Cubilla’s men faced an extremely talented side in the form of Atlético Nacional from Colombia, and after dispatching the Colombian powerhouse 2-0 in impressive fashion in the first leg, El Decano were unlucky to lose the tie on penalties after Nacional won the second leg 2-0 in Medellín. By 1990, Olimpia had assembled a richly talented squad featuring the likes of former Barcelona goal-machine Raúl Vicente Amarilla, Paraguayan internationals Gabriel ‘El Loco’ González and Adriano Samaniego, as well as legendary goalkeeper Ever Hugo Almeida. The 1990 Copa Libertadores however, would further thrust Cubilla and Olimpia into the pantheon of South American football greats.

El Decano topped a very difficult group, featuring Brazilian powerhouses Grêmio and Vasco da Gama, as well as the club’s biggest domestic rivals Cerro Porteño, ending the group stage on seven points with three wins, a draw and two away losses. Olimpia automatically progressed to the quarter finals where they would defeat Chilean side Universidad Católica 6-4 on aggregate, defeating Los Cruzados 2-0 in the first leg before playing out a thrilling 4-4 draw in the return fixture. Cubilla’s men would then meet Atlético Nacional once again in the semi-final, in a repeat on the previous year’s final, but this time it would be El Decano who would have the last laugh.

Olimpia won the first leg 2-1, before Nacional responded in impressive fashion and defeated El Decano 3-2 in Asunción, sending the tie into penalties after finishing 4-4 on aggregate. Almeida was phenomenal in the shootout, saving three of the Colombian’s penalties and helped Olimpia exact revenge on Francisco Maturana’s men. Olimpia would meet Ecuadorian giant Barcelona SC in the final, who spectacularly defeated Argentina’s River Plate in their semi-final clash. Goals from El Loco González and Raúl Amarilla in the first leg in Asunción at the Estadio Defensores Del Chaco saw Olimpia defeat the Ecuadorians 2-0, before El Decano clinched their second Libertadores in Guayaqil after holding the hosts to a 1-1 draw.

The silverware kept coming thick and fast for Cubilla’s men, and Olimpia became the only team to win the Recopa Sudamericana without playing the match, automatically winning the trophy due to holding the Copa Libertadores and Supercopa Sudamericana simultaneously. El Decano’s second Libertadores crown meant they qualified for the Intercontinental Cup once again, where they were swept aside by Arrigo Sacchi’s back-to-back European Cup-winning AC Milan side 3-0 in Tokyo. There is no shame in losing to one of the greatest club sides ever seen, and Olimpia would eventually make the final of the Copa Libertadores again the following year for an incredible third consecutive time.

Olimpia faced Chilean giant Colo-Colo in the 1991 final of the Libertadores, but were unable to capture their third Libertadores crown, drawing 0-0 with Los Albos in Asunción before being blown away 3-0 in Santiago in the second leg. El Negro stepped down again as manager of Olimpia in 1993, before rejoining the club again for a third managerial spell that lasted from 1995 to 2002. El Decano’s squad wasn’t as strong as their swashbuckling 1990 team that swept all before them, but Cubilla still managed to guide Olimpia to four more Paraguayan titles in 1995, 1997, 1998 and 1999 respectively.

El Decano lifted their third Libertadores in 2002 in the club’s centenary year under former Argentinean World Cup-winning goalkeeper Nery Pumpido, and Cubilla’s third spell with the club would come to an end the same year. El Negro would manage Olimpia for a fourth time when he took charge of El Decano from August to December in 2010, but soon called time on his legendary coaching career. Cubilla spent the rest of his days in Asunción, and died on March 3, 2002, at the age of 72, leaving behind a legacy few figures in the footballing world have been able to match. Few managers have transformed a club the way that El Negro Cubilla did with Olimpia, and he will always remain one of the most iconic figures of South American football.

Olimpia made the final of the 2013 Libertadores for the seventh time in the club’s history, only four months after the passing of Cubilla. El Decano were unlucky to lose to Brazil’s Ronaldinho-inspired Atlético Miniero on penalties after winning the first leg 2-0 and conceding a last minute goal in the return leg to see the Belo Horizonte-based side win the game 2-0. Olimpia remain one of the greatest club sides in South American football, and owe much of their incredible success to one man – Luis Alberto Cubilla. His legacy lives on.