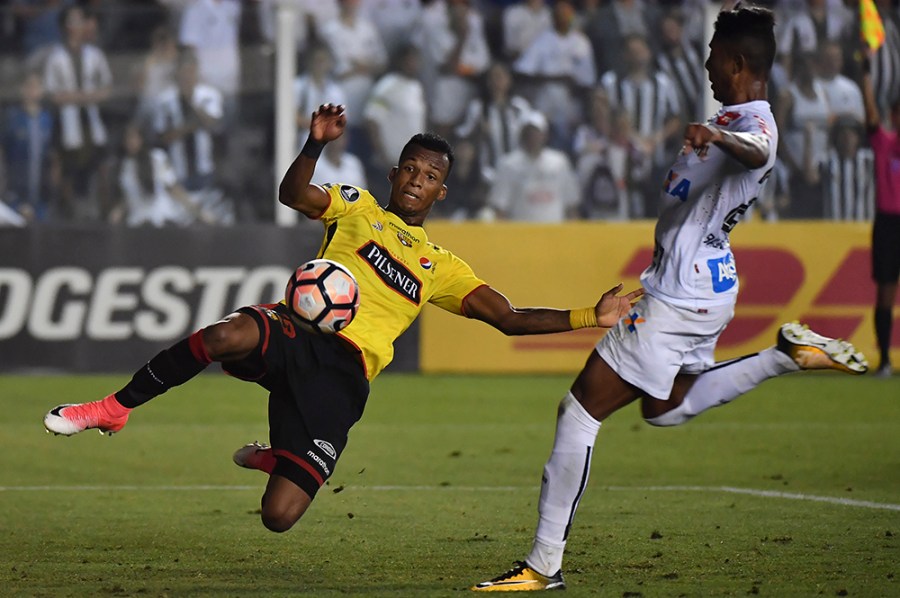 England centre-back Terry Fenwick once remarked that trying – and failing – to mark Diego Maradona in the 1986 World Cup quarter-final had ruined his career.

On one hand it seems a strange thing to say. Fenwick played on after Mexico 86, joined Tottenham and helped win the 1991 FA Cup. Meeting Maradona, then, was far from the end of him as a player.

But on the other hand his declaration makes perfect sense. Top level football is about the quest for excellence. Fenwick was three matches away from winning the World Cup, and fulfilling all those dreams that had motivated his time in the game. Then he came up against the best, and was found wanting. Things could never be quite the same again.

How will they be this week for a centre-back who finds himself in a similar situation?

Just 22, Dario Aimar has been at the heart of the success of Ecuadorian champions Barcelona. Last year, his first with the club, he was the junior centre-back, alongside Anderson Ordonez. At the start of the year, the World Soccer Libertadores Cup preview picked out Barcelona as dangerous outsiders, noting that their strength was based on defensive solidity, and that although Ordonez had been sold to Germany, talented replacements were available. Aimar took on extra responsibility, forming a fine combination with Xavier Arreaga and the club made impressive progress through South America’s equivalent of the Champions League.

In 10 games the team have conceded just 10 goals – and six of those came in two matches where they let their guard down, having already qualified for the knock out phase. They have specialised in knocking out Brazilians, getting the better of Botafogo in the group stage before eliminating both Palmeiras and Santos – leading up to a clash with another Brazilian opponent in the semi final. They are at home to Gremio this Wednesday, travelling to Porto Alegre for the second leg a week later.

Playing the second leg away has suited them so far.  Barcelona lack midfield elaboration. But they have plenty of attacking pace and power down the flanks, and their model of play is well suited to the counter-attack – providing they can maintain that defensive solidity.

The key to this is the performance of Dario Aimar. He has been especially eye catching in the course of the campaign, quick across the ground and classy on the ball, generating interest from clubs in Brazil and Europe. His displays in the Libertadores forced his way into the Ecuador national team – and therein lies the problem.

He appeared in the recent final two rounds of the World Cup qualification campaign. Ecuador had sacked their coach and appointed a caretaker, all but giving up their remote chances of making it to Russia.  An experimental squad, full of untried players, was announced. Aimar had not been on the losing side in three friendlies played earlier in the year. But this was not an ideal atmosphere in which to make his competitive debut. Ecuador lost 2-1 away to Chile, and then came the last round, at home to an Argentina side in real danger of missing out on the 2018 World Cup.

A defeat for Argentina could have been the last time Lionel Messi was seen in an Argentina shirt. A victory would give Messi one more crack at winning the World Cup while still close to his prime. And Messi, of course, rose to the occasion, saving his side with a glorious hat-trick.

The goals were all scored by finding a hole in the defence that Aimar should have been filling. The young centre back had a dreadful game. Nothing in his short but successful career had remotely prepared him for the task of trying to stop an inspired Messi. Gone was the class and the poise that fans of Barcelona of Guayaquil have been counting on. Instead he was one more hapless defender taken apart by the man from Catalonia’s Barcelona.

There is no shame in coming out second best against Messi. The test is in the reaction. How does Aimar respond after climbing the mountain only to receive a bruising fall? Can he find the same calm authority that has broken the hearts of Brazilian strikers in this year’s Libertadores? Or has his self-belief been damaged by tangling with Messi? It is Gremio’s task to find out.