In global terms, the last truly competitive side to come out of South America was the Corinthians team moulded by coach Tite, who won the Brazilian title in 2012 and followed it up the following year with the Libertadores Cup and Club World crown.

And after Corinthians’ latest league triumph, there are hopes that Tite can do it again – and this time with much more style.

Tite’s previous Corinthians side were solid rather than inspired. They were a team of mostly single-goal victories. After that side broke up, the coach took some time off and continued his education with a study of European club football, before returning to build a team as compact as its predecessor but far more expansive and much easier on the eye.

The key to the 2015 side was the excellence of its midfield. Ralf anchored, allowing Elias to break forward, while the star turns were the playmaking pair of Jadson and Renato Augusto – the former busy, talented and precise; the latter imposing and elegant. Some critics doubted the wisdom of trying to fit both into the same line-up, but the pair dovetailed beautifully, giving the team a quality in possession that no one else came close to matching.

Tite even shrugged off a shock Libertadores elimination in May, when Corinthians were beaten home and away by Guarani of Paraguay. By the time the league got under way, he knew his team could get better – despite the financial problems which led to the sale of Peruvian centre-forward Paolo Guerrero.

He was replaced by former Brazil international Vagner Love, who was greeted with widespread scepticism but whose back-to-goal proficiency blended in well with such a gifted midfield. Love recovered his goal touch to become the league’s second-top goalscorer, while teenage left-winger Malcom provided verve and pace in what was otherwise a mature, experienced team.

An intelligent group of players, with a strong belief in their coach and his methods, the title was effectively decided in early November when Corinthians visited second-place Atletico Mineiro.

Usually so strong at home, it was a game Atletico had to win, and as a side whose game is based on spasms of furious attacks, they unleashed their armoury – only for Corinthians to hold firm and
pick them off in the second half to win 3-0.

It was a demoralising defeat for Atletico, who before the end of the season surprisingly sacked their coach, Levir Culpi. Amazingly, Tite was the only coach to spend the entire season in charge of
the same club.

Corinthians may have been head and shoulders above the opposition, but in an era when – despite a financial advantage – Brazilian clubs have been performing so poorly in continental competitions, that is not in itself a ringing recommendation.

Atletico Mineiro were fiery but nowhere near as consistent as Corinthians – and there were no other real contenders. Gremio surprised perhaps even themselves by finishing third, with promising coach Roger Machado doing well despite a squad lacking strength in depth. Internacional underperformed, with the team falling to strange bouts of laziness and throwing fourth place away to Sao Paulo, who spent most of the year in political turmoil.

Other than Corinthians and Atletico Mineiro, the only team to cause general enthusiasm were Santos, who threw off a dreadful start to race up the table.

Lucas Lima pulled the strings in the Santos midfield, setting up the chances that made centre-forward Ricardo Oliveira – who was well supported by Gabriel Barbosa – the league’s runaway top scorer with 20 goals. They were, however, entirely dependent on their home form, managing only one away win in their entire campaign – a defect which would also prove their undoing in the Brazilian Cup Final.

After playing their way into the top four, Santos turned their back on the league in order to concentrate on the Cup Final against Palmeiras. But after failing to make the most of home advantage and only winning 1-0 in the first leg, they performed poorly in the return and lost 2-1 before being beaten on penalties.

For Palmeiras, the cup win crowned a year in which supporters had flocked to their new stadium, which is considered the most impressive of Brazil’s new grounds. Indeed, of the clubs that finished in the league’s top 10, only Sao Paulo and Santos did not stage some of their matches in new or refurbished arenas.

The new gleaming locations were also surely part of the explanation for the rise in crowds, with the average of just over 17,000 the highest since 2009. This is especially noteworthy as the Brazilian economy is slipping from recession into fully fledged depression.

Financial stresses make it all the more imperative to sort out one of the great problems of the Brazilian game: the calendar. The next national league does not start again until late May and until then there is the dreadful, outdated, loss-making state championships, in which the big teams waste their time taking on tiny opponents.

Increasingly clubs are waking up to this problem and starting to seek alternatives. Those clubs, though, do not include Rio giants Vasco da Gama, for whom a bungling of the calendar was a decisive factor in their third relegation in eight years.

At the start of 2015 the club’s controversial president, Eurico Miranda, declared that his priority was winning the Rio State state title. This duly happened, but as soon as the national league started the team’s limitations were exposed. Vasco managed just 13 points in the first half of the season. With plenty of new signings they rallied strongly under coach Jorginho, losing just one of their last 15 matches, but it was not enough to save them. 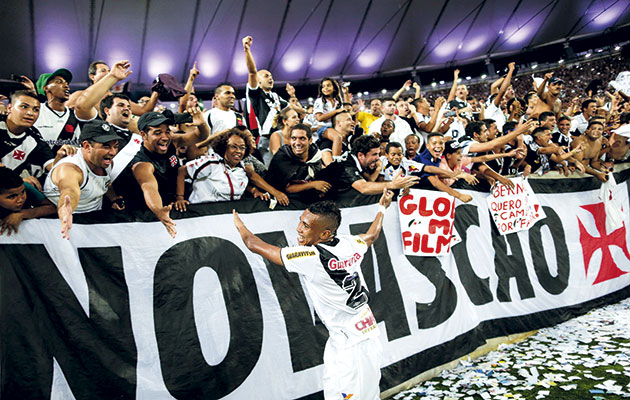 Relegated with Vasco are Goias, and two of the four-strong contingent from Santa Catarina, who always looked strong candidates for the drop. Chapecoense survived in relative comfort, while Figueirense were biting their nails until the final whistle as city rivals Avai went down, along with nearby Joinville.

In an otherwise appalling year for Rio’s clubs, Botafogo bounced straight back as second division champions. They will be joined in next season’s top flight by America Mineiro and, importantly, by a pair of clubs from the North East. In 2015 the region’s only representatives were Sport of Recife, who finished a creditable sixth. They will be joined in the next campaign by city rivals Santa Cruz, and Vitoria from Salvador.

With three clubs from the North East taking part, the 2016 championship will take on more of a genuinely national dimension.