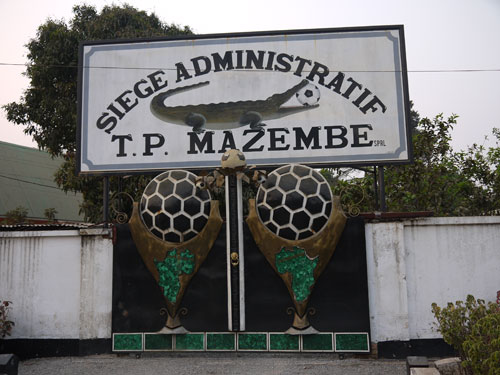 Entrance to T.P. Mazembe's entrance to their old administration centre

Their body language is not the earnest one of African charities, all big pleading eyes aimed at provoking a donation. Here in these young African schoolboys is defiance, pride, ambition. The first day of senior school for the latest intake at TP Mazembe’s academy is a chance, their chance.

More than 8,000 children from across the DRC and neighbouring countries were scouted, given a chance to impress and take one of just a dozen places in an academy that has the potential to change their lives.

“We have some boys here who are 12 or 13, that are very good but have never been to school for a single day, so we are paying their school fees,” says Régis Laguesse, director of the academy.

The parents all had to agree to let their children go and live with the club, where they also get free medical treatment, including vaccinations. Laguesse has spent years in Africa and simply shakes his head on trying to describe the conditions he experienced on visiting parents to get secure consent. “Some were living eight or ten people to a room,” says Laguesse eventually.

A former Ligue 1 player with Angers and Nice, he espouses the coaching credo of his former team-mate Jean-Marc Guilloux. The Mazembe academy follows a system that Laguesse and Guilloux used so successfully in the Ivory Coast, where their academy in Abidjan produced the Toure brothers and Salomon Kalou. Laguesse subsequently moved to Kinshasha but when his academy in the DRC’s chaotic capital ran into financial problems in January 2012 he took up an offer to join what must surely be the richest club in Africa.

TP Mazembe has a club jet, but the first intake of academy trainees do not even get boots. Not until they have passed every one of 58 skills-based tests set by Laguesse. If the young players fail, they do it again the following week until they pass. This takes around two years. During that time, the players regularly play matches against other teams, including older Mazembe academy players, many of whom wear boots.

“The principle of no shoes is very simple; try writing with your gloves on,” says Laguesse rhetorically, as he stands in the dry African heat watching his freshers go through a series of basic technical drills. “Always you have to think quickly about what to do with the ball. Jean-Marc Guilloux was the best technical player; he was not very quick but when he had the ball it was impossible to get it from him. Here, players must earn their shoes.”

That might sound harsh but the difference for the latest intake in Lubumbashi is that TP Mazembe now boasts a brand-new 20,000 all-seat stadium with a latest generation artificial pitch. 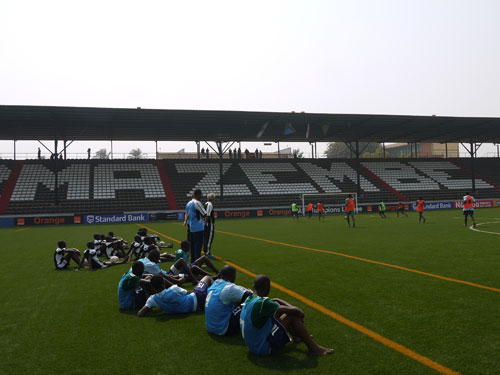 Young players watch the training drills from the sidelines

Laguesse does not initially even bother with goalkeepers until his scholars have mastered the basics. Instead, two-touch games are played across the width of a pitch with defenders sweeping in front of the goal area. “We can choose goalkeepers later,” says Laguesse with a Gallic shrug.

Inspired by Barcelona’s legendary La Masia many clubs are now focussed on their academies, but few African clubs bear comparison to TP Mazembe. The club was a giant of sub-Saharan football in the 1960s. A country then known as Zaire would qualify for the 1974 World Cup finals with a number of Mazembe players, but civil war decimated the nation. Lubumbashi did not suffer as badly as Kinshasa in the north, but football was an afterthought in a conflict that would kill six million people.

Mazembe chairman Moise Katumbi returned to the DRC from exile in Zambia in 2007 to win elections for the governor of his native Katanga Province. By regulating Katanga’s rich mining industry and putting tolls on roads, he generated money for infrastructure and new schools. Katumbi also revitalised a club that he grew up supporting as a young boy with his Father on the terraces at the club’s old home, Stade Frederic Kibassa Maliba.

The day before the first day of school for Laguesse’s first-years, Mazembe booked their place in the semi-finals of the Champions League with a routine win over the unadventurous Egyptians of Al-Ahly. After the match, Katumbi invited fan group The 100% Club back to his substantial mansion. Post-match parties have become regular after a Champions League win with the fan group’s superb brass band providing the music.

Mazembe were seemingly on the way back to Champions League glory, having won the competition in 2009 and 2010 only to be kicked out in 2011 over a technicality that was subsequently proved incorrect.

For many Congolese, that disqualification was simply further evidence of a conspiracy by northern African sides to side-line sub-Saharan sides. In 2012 though, Mazembe would again fail to make the final, this time departing at the semi-final stage after being unable to break down the Tunisians of Espérance. That exit made the academy all the more vital.

Mazembe’s annual revenue is around U$D15 million a year but the club is largely sustained by Katumbi. The stadium cost U$D 35 million to build. Ticket prices start at U$D 3 and go up to U$D 12 in the main stand. There are also 15 air-conditioned VIP boxes and when the new stadium is full, that generates revenue of around U$D 200,000 per match. But a full-house is only guaranteed for Champions League matches; if Mazembe reach the final that is a maximum of seven games. The only DRC league matches guaranteed to sell-out are derby games with local rivals Dombosco plus fixtures with a couple of the big Kinshasa-based sides.

For a club with a huge squad of nearly 40 players, including half the Zambian side that won the 2012 African Cup of Nations, there is a hefty U$D 5 million wage bill. The team’s lynchpin, DRC national team star Tresor Mputu eschewed damp north London on a trial at Arsenal to return home to the gold-fish bowl celebrity of Mazembe, where he earns more than U$D 500,000 a year. The Zambians do not come cheap either. All this resembles massive outgoings but Katumbi sees Mazembe as a chance to put across a more positive vision of Africa – and one that he is, for now, happy to bankroll.

“I never inherited money,” says Katumbi, a charismatic self-made millionaire through interests from catering and mining to a share in an airline. “I made my own life and I want Mazembe to make its own too. In two or three years, Mazembe will not depend on me.”

Longer term, Katumbi fancies the unlikely idea of floating the club on a stock exchange; quite what the intrepid traders on the Johannesburg bourse – the nearest major option – would make of that idea is hard to judge. What they would certainly want to see is evidence of income. 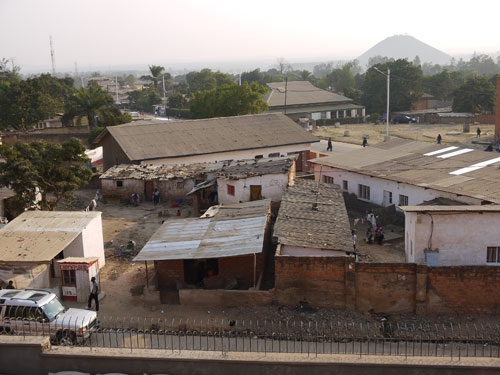 In contrast with the gleaming new stadium, conditions outside the ground remain very basic

Since 2009, winning the Champions League is worth upwards of U$D 1.5 million. Taking that trophy also guarantees a place in the cash-laden FIFA Club World Cup, a competition worth U$D 500,000 simply for turning up and U$D5 million for winning. In 2010, Mazembe nearly did that, beating Corinthians of Brazil only to lose to Inter Milan in the first final appearance by an African side.

Missing out on another tilt at the Club World Cup after the politically inspired machinations of their exclusion in 2011 is likely to see a break-up of the first team, with some ageing players departing.

In the short-term replacements are being bought, such as Gladson Awako from this season’s Champions League opponents Berekum Chelsea of Ghana. Soon, hopes Régis Laguesse, the first XI will come from his academy with the very best sold overseas to help sustain the club and reduce dependency on Katumbi.

Already, the signs are promising. In 2012, a side of older academy players became one of the few African sides to be invited to the prestigious FIFA Blue Stars tournament in Zurich. Either side of that competition, Mazembe’s youngsters trained with Anderlecht and Stuttgart Kickers and played in another tournament in Germany, where they finished runners-up to the youth XI of Bundesliga side Mainz.

On returning from Europe, two players signed professional contracts at Mazembe. Another six signed for Mazembe’s local rivals, Dombosco. Aiding the opposition might seem strange but the academy is owned directly by Katumbi, whose son runs Dombosco.

Mazembe need stronger local opposition and the academy is helping. In 2012 Dombosco won promotion to the top flight and the DRC Cup, which has provided entry to the CAF Confederations Cup in 2013. Lubumbashi also has a third club, Corbeaux, set up by Katumbi in his 20s after his own footballing ambitions were ended through injury. Corbeaux could also see some form of help from the Moise Academy, which is the base of a burgeoning football empire.

Its emperor wears a trademark matching white blazer and Stetson yet Katumbi can walk freely in Lubumbashi with little evidence of bodyguards. This is an indication of his popularity, which is aided by his commitment to Mazembe. “The objective is to become the Barcelona or Real Madrid of Africa,” he says, illustrating the scale of his ambition.

Elimination from the 2012/13 Champions League was a set-back, but not a terminal one; the Moise Academy should see to that. 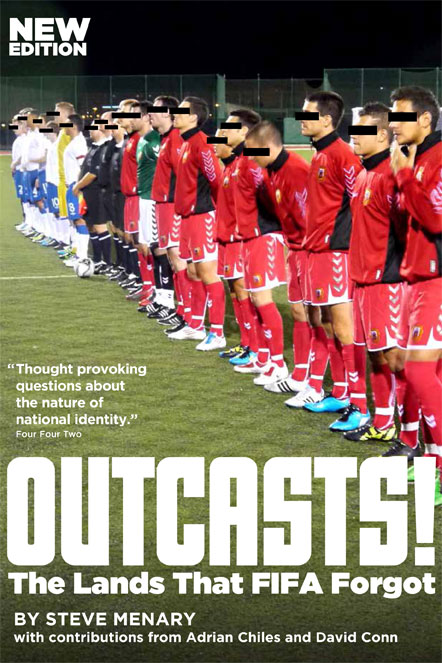