1. Dortmund in mourning
Tears flowed and sadness reigned in Dortmund on Sunday after two supporters of the ‘Schwarz-Gelben’ suffered heart attacks during a 2-0 home win over Mainz. One fan, an 80-year-old, tragically passed away, while the other was reported to be in a stable condition in hospital.

As the terrible news filtered through, the normally cauldron-like Westfalenstadion fell respectfully silent, the crowd only turning up the volume at the end of the game with a rousing chorus of “You’ll Never Walk Alone”.

“Us players had absolutely no idea what was going on and at first, we were perplexed why the stadium was so quiet,” explained Dortmund winger Marco Reus. “At times like this, a match becomes far less important. You have to compliment the fans for the way they reacted.”

Mainz coach, Martin Schmidt was equally moved with the dignity and unity on show: “I found it incredibly impressive how, in just a few minutes, 80,000 fans became totally hushed. It was an unbelievable show of solidarity from the terraces.”

2. “Please, please book me.”
The decision of a DFB (German federation) disciplinary committee to fine Werder Bremen midfielders, Clemens Fritz and Zlatko Junuzovic, 20,000 euros each for intentionally picking up yellow cards in a recent victory against Hannover has provided no end of fall-out.

Much happier to be banned for Saturday’s Mission Impossible at Bayern Munich – which inevitably ended 5-0 to the Bundesliga leaders – than a more ‘winnable’ fixture in their side’s quest to avoid relegation, both players admitted to manipulating the yellow card system.

But was it a one-off event? Only in February, five Darmstadt players contrived to be suspended for the 3-1 defeat in the league at Bayern, though in this instance, nothing could be proved and no sanction ensued.

Another school of thought was that Fritz and Junuzovic got off lightly; in UEFA competitions, such unsportsmanlike behaviour is punished with a one or two game suspension.

3. Meet the new boss. Same as the old boss 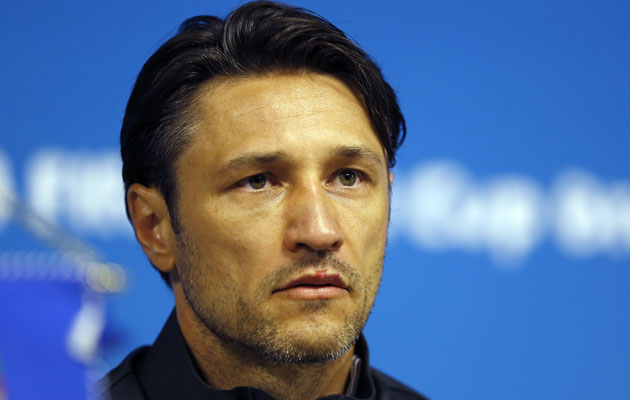 Croat Niko Kovac knows he has a battle on his hands trying to keep Eintracht Frankfurt up.

Somewhat of a surprise choice to replace the sacked Armin Veh as coach of Eintracht Frankfurt, ex-Croatia boss, Niko Kovac, would not have enjoyed any aspect of his debut on The Eagles bench on Saturday – a thoroughly dispiriting 3-0 defeat at Gladbach which leaves his new side even further in the relegation mire.

Kovac, a former indefatigable midfield warrior for Leverkusen, Hamburg, Bayern and Hertha Berlin, already looks a worried man and so he should be. It’s eight games since Eintracht last won in the Bundesliga and against Gladbach, the Hesse outfit once again looked like a team without hope, technically poor, only mustering one goalscoring chance in 90 minutes and error-prone (keeper Lukas Hradecky gifting the opposition two goals).

“We’re still a long way from where we want to be,” said Kovac in one of the understatements of the year. ” We have to learn how to play football even when we’re under pressure. ” Too true.

4. Careless Kruse, careless hands
According to the tabloid Bild, Wolfsburg and Germany attacker, Max Kruse has been heavily fined by his club after it came to light that he had lost the princely sum of 75,000 euros in a Berlin taxi early one Sunday morning last October. Kruse, capped 14 times by Germany, immediately reported the loss to police in the capital city. But up to now, no trace of the ‘biggest tip in cabby history’ has been found.

“We’ve made it clear to him (Kruse) the sort of conduct we expect from our players and can only hope that this is a lesson for him, that he mends his ways,” declared Wolfsburg CEO, Klaus Allofs.

5. Never write off Kramny’s Stuttgart
Ever since Jürgen Kramny replaced Alex Zorniger as head coach at the Mercedes-Benz Arena, the Swabians have fought like devils to haul themselves out of the Bundesliga danger zone and certainly had to be at their combative best on Saturday, scoring twice in the last ten minutes to secure a 3-3 draw at mid-table Ingolstadt.

“It was a super intensive game,” declared Kramny afterwards.”On going 3-1 down, we went into all or nothing mode and might have gone even further behind. However, we always believed in ourselves and in the end, it was a great result for our morale.”

Definitely two points dropped by the hosts, who for only the second time this season managed three goals in a game and still could not seal the deal.

Tim Vickery’s Notes from South America: the charm and frustration of the Copa Libertadores