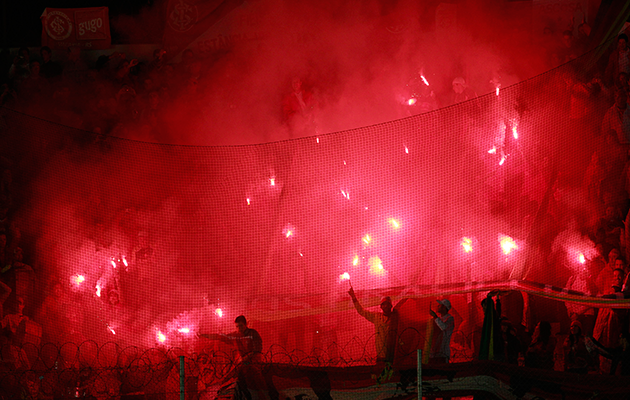 In the penultimate round of last year’s Brazilian championship, Porto Alegre giants Internacional came to Rio’s Maracana stadium to play Fluminense with their sights set high.  Two wins in the last two games would ensure qualification for the 2016 Copa Libertadores, the competition they had won a decade earlier, when they had also gone on to beat Barcelona and claim the Club World title.

In the first half Internacional went a goal up and a man up – Fluminense had a player sent off.  The first of those two wins, then, seemed guaranteed.  But the team put in a strikingly lacklustre performance.  The game finished 1-1, and Inter missed out on the Libertadores.

This Sunday Inter round off their league campaign with another clash with Fluminense in the Maracana.  Only this time there is nothing promising about their situation.  Their fate is not even in the own hands.  They must win the game, and hope that both Vitoria and Sport slip up.  Otherwise Internacional will be relegated to the second division for the first time in their history.

‘Big clubs don’t go down’ is a favourite slogan of Inter directors.  It is not true.  Over the last two decades, seven of Brazil’s traditional big twelve clubs have been relegated.  Vasco da Gama have gone down three times in the last ten years, and managed to creep back to the top flight with last day promotion on Saturday.  Twenty four hours later Palmeiras were crowned champions of Brazil – they have had two recent spells in the second division, the most recent in 2013.  In reality, Inter’s slogan is a way of sniping at Gremio, their Porto Alegre neighbours.

The so-called Gre-Nal is probably the fiercest local rivalry in Brazil, the fruit of a city big enough to support two big clubs and no more, and also of a footballing culture which owes much to nearby Uruguay.  And to make things even worse for Internacional, this is the week when Gremio seem likely to clinch a major title.

In the final of the Brazilian Cup, Gremio are 3-1 up after the first – away –leg against Atletico Mineiro.  Atletico responded to defeat in front of their own fans by immediately sacking coach Marcelo Oliveira.  Gremio are strong favourites to finish the job in Porto Alegre on Wednesday, when their fans will go along in the expectation of celebrating a title, and also of relishing the opportunity to goad their local rivals.

Inter, meanwhile, have collapsed.  “Unlike recent years,” said the magazine Placar in its guide to the season, “Inter do not go into the campaign among the favourites.  But with a renewed, quality squad, they could do well.”

They even topped the table after some of the early rounds.  But then the wheels fell off.  There seemed to be more panic than planning about some of the key decisions – signing players, hiring and firing coaches.  The recently appointed Lisca is their fourth coach of the campaign.  None of the changes – Argel Fuchs to Falcao to Celso Roth and now Lisca – have brought about a change in fortunes or an improvement in performance.

In last Monday’s 1-0 defeat to Corinthians a team badly needing a win could hardly muster a shot on goal.  On Sunday it took a superb solo goal from Valdivia – carrying the ball from deep inside his own half before shooting home – to beat Cruzeiro 1-0 and keep them alive for a few more days.

Nothing they do on Sunday will be enough to keep them up – if Sport win at home to already relegated Figueirense, and Vitoria pick up four points (or probably three, given their goal difference) from two remaining games, away to Coritiba tonight and at home to Palmeiras in the final round.

Internacional, then, have to plan for the second division as a real possibility.  The time has come to jettison the cheap jibe about big clubs not going down.  Instead, if the disaster happens, then it must be embraced.  Most – although not all – of the giants who have been relegated have bounced back immediately, stronger and better for the experience.  Palmeiras – from second division in 2013 to champions now – is just one example.  Inter can even take some heart from the tale of their neighbours.  Gremio went down in 2004, just managed to get back up again in epic circumstances a year later – and by 2007 were playing in the final of the Libertadores.