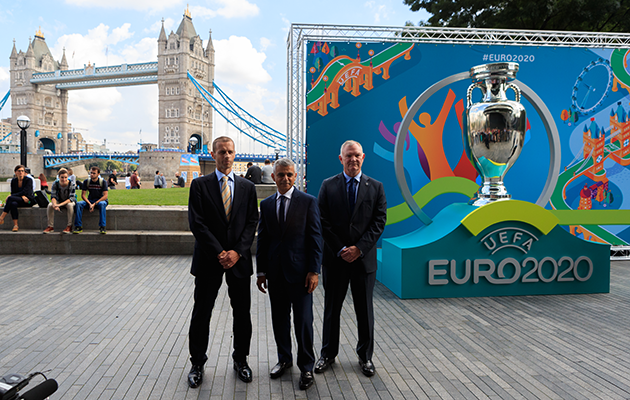 Aleksander Ceferin still has every intention of seeing if he can unpick the Champions League deal sprung on angry European football federations by the big clubs and the executive committee.

The 48-year-old Slovene signalled here in London today that his intentions have not changed since he was elected as new head of UEFA last Wednesday in Athens in succession to the banned Michel Platini.

Ceferin was in London, on his first official presidential engagement, for the launch of the Euro 2020 tournament and logo, a mere 73 days after Portugal upset hosts France to win the 2016 European Championship crown in Saint-Denis.

Last month, in what appeared a rush for money and power to beat Ceferin’s possible election, UEFA announced that, for the three-year commercial convention from 2018, the top four leagues – meaning Spain, Germany, England and Italy – would all be guaranteed four firm places in the group stage.

Currently the ‘fourth team’ of the top three leagues has to compete in the qualifying play-off round while fourth-ranked league, currently Italy, has only two guaranteed places plus one in the playoff round.

The European Club Association will also share, with UEFA, control of a new administrative company.

The coup angered many European national associations who protested that they had not been consulted in advance. One of the complainants was Ceferin himself, in his role as president of the Slovene federation. Immediately after his election he said he would study whether the deal could be scrapped.

Ceferin, who started effective work as president only yesterday, said in London: “Of course it’s not good for the small and mid-size associations. But it was my first day yesterday.

The new deal covers the commercial and competition sphere of 2018-21. Ceferin, even though he has a mandate from 42 of the 55 UEFA asociations, will need to tread warily in political terms because his term lasts only until the spring of 2019. That is, probably before the succeeding deal will need to be concluded.

On other political issues Ceferin dismissed questions raised about his background and the conduct of the Slovene federation and expressed confidence about his relationship with the Football Association even though England voted against him.

The Norwegian website, Josimar, has raised concerns over the past week over whether Ceferin had been technically qualified to stand for UEFA president and also over events surrounding a €4m loan from UEFA to the Slovene federation.

Ceferin said: “That’s another joke from the same media. It’s all completely clear and UEFA has all the documents and I was even not involved in this [loan]. But I had expected some sort of stories from the same people who didn’t want to come to where I am.”

As for his relationship with the FA, which will host the next Euro flagship finale, Ceferin was complimentary, saying: “It was a pleasure for me to come here. We had a nice conversation with the new chairman [Greg Clarke]. I think now they’re backing me up.”

Martin Glenn, ceo of the FA, had also addressed the ‘building bridges’ issue on the sidlines of the launch. Glenn said England’s stance did not represent any particular doubts about Ceferin. The FA had voted for defeated presidental rival Michael Van Praag, head of the Dutch KNVB, “because we have known him and what he stands for, for a very long time.”

Ceferin was non-committal about a proposal within UEFA to consider paying a ‘golden goodbye’ to Platini, who has continued to protest his innocence over the issue of financial misconduct which brought him a four-year ban from the ethics chamber of world federation FIFA.

Platini’s successor insisted he had no knowledge of any such proposal.

He said: “I don’t know [about this] I will find out probably next week I think.” He was vehement that he had never suggested such a payment.