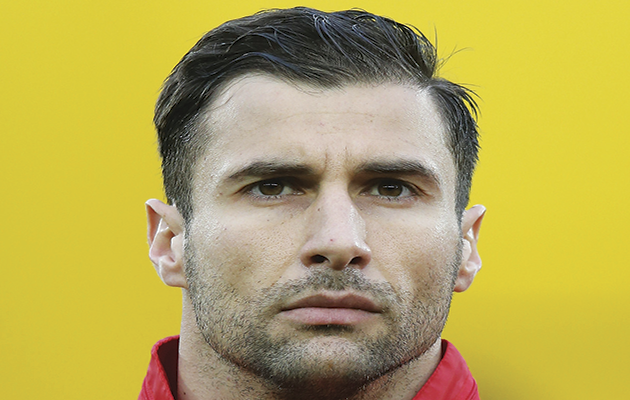 Coach Gianni Di Biasi could find no place for teenage winger Milot Rashica who had impressed at Vitesse Arnhem in Holland this season and made his senior Albania debut in the March friendly against Luxembourg. He was included in the provisional 27-man party but dropped from the final 23 and could now opt to play for Kosovo.

There were very few other surprises in the final squad selection. Atalanta defender Berat Djimsiti was overlooked in favour of Lugano defender Frederic Veseli, defensive midfielder Ergys Kace was preferred to centre-back Amir Rrahmani while there was no place for Skenderbeu striker Hamdi Salihi, the 28-goal top scorer in the Albanian league this season.

Ansi Agolli
59/2
Qarabag (Aze)
Age 33 (11.10.82)
Much travelled left-back or midfielder, having played for FK Tirana and then clubs in Switzerland, Finland and Azerbaijan.

Andi Lila
57/0
Giannina (Gre)
Age 30 (12.02.86)
Utility defender who has played for Albania at all levels. Back in Greece after doomed loan spell at Italy’s Parma last year.

Frederic Veseli
3/0
Lugano (Swi)
Age 23 (20.11.92
Former Manchester City trainee who also had a spell at Manchester United before joining Ipswich Town and spending time on loan at Bury and Port Vale. Captain of Switzerland’s victorious Under-17 world championship side in 2009, he played for the Swiss at all levels up to under-21, before accepting an offer to play for Albania. He made his debut in November last year.

Odise Roshi
30/1
Rijeka (Cro)
Age 25 (22.05.91)
Speedy winger who has revived his career in Croatia after a spell in Germany with Cologne and second-tier FSV Frankfurt.

Armando Sadiku
18/3
Zurich (Swi)
Age 25 (27.05.91)
Born in Albania but now playing in Switzerland. Scored in the 3-0 win over Armenia that sealed Euro qualification