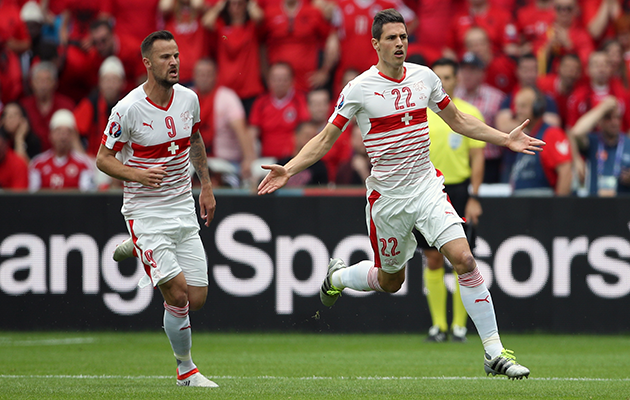 Switzerland did just enough to see off 10-man Albania in Lens but they lacked any finishing finesse against nervous tournament debutants. The Swiss failed to add to an early lead taken when Fabian Schar rose above keeper Etrit Berisha to head home from a corner. Although they could not take their chances, allowing Albania back into the game, Lorik Cana’s red card looked to be a killer blow. But a spirited second-half performance saw Albania hold their own, backed by a majority of the crowd at the Stade Bollaert-Delelis. Substitute Shkelzen Gashi had a perfect chance for a late equaliser, but was foiled by a brilliant save from Swiss keeper Yann Sommer.

Lorik Cana, Albania’s captain and talisman, was sent off for a second yellow following a silly handball to prevent Haris Seferovic getting through on goal, though appeared to be impeded by the Swiss centre-forward. The red card ruled Cana out of the second game, against France in Marseille, where he played for four seasons.

Granit Xhaka won the battle of the Xhaka brothers, though he was lucky to escape punishment for a wreckless early foul. His brother Taulant slammed a water bottle against the Albania bench in frustration after he was substituted.

Swiss striker Haris Seferivic had four shots on targets – but all were saved by Albania keeper Etrit Berisha.

A game of two keepers. Albania keeper Etrit Berisha was at fault for the game’s only goal, failing to get close to Fabian Schar as he headed home. But he did brilliantly to deny Haris Seferovic in a number of one-on-ones. Swiss number one Yann Sommer, meanwhile, pulled off fine saves to deny Armando Sadiku, who had been played in by Elseid Hysaj, and late in the game against substitute Shkelzen Gashi.