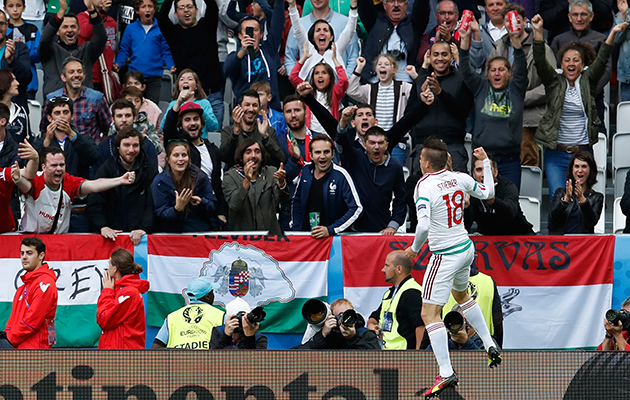 Match overview:
Unfancied Hungary pulled off one of the surprises of the tournament so far when they beat 10-man Austria 2-0 in Bordeaux.

A lively match began with Austria midfielder David Alaba hitting a post in the opening seconds. Austria almost took the lead with the best move of the first half but Martin Harnik slipped as he tried to turn in Marko Arnautovic’s cross.

Austria searched for the equaliser but Hungary worked diligently to contain them and when Austria defender Aleksandar Dragovic was sent off on 66 minutes, the so-called Habsburg derby turned in Hungary’s favour.

Key moment:
Midway through the second half, just when Austria thought that Martin Hinteregger had equalised with a thunderous volley, defender Aleksandar Dragovic was sent off (second yellow) for a late challenge on Tamas Kadar in the build-up to the attack. Ten-man Austria never recovered and substitute Zoltan Stieber grabbed a second goal for Hungary in the dying minutes.

Man of the match:
Hungary midfielder Laszlo Kleinheiser was a lively presence throughout the game. He set up Balazs Dzsudzsak for the best chance of the first chance, which was pulled wide, and then exchanged passes with Adam Szalai to play in the striker for Hungary’s opening goal.

Matter of fact:
Hungary’s track-suited goalkeeper Gabor Kiraly became both the oldest player and debutant ever to play in the European Championship.

Talking point:
Not many people were predicting positive things about Hungary ahead of the tournament but they surprised with their attacking intent against Austria. They held their own in the first half and grew in confidence after the break.

The opening goal was well-worked and their second was brilliantly finished by substitute Zoltan Stieber in a blistering counter-attack following an Austria corner.