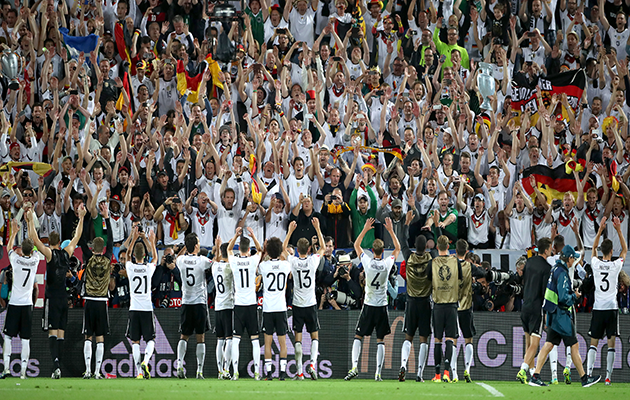 1. Never satisfied Scholl
You might have expected every German football pundit to be ecstatic after their national team dramatically prevailed on penalties in Saturday’s Euro 2016 quarter-final against Italy, the first time they had ever beaten the Azzurri in a competitive duel. Not so.

Some small screen analysts are notoriously hard to please and on the mainstream ARD TV, former Bayern Munich and Germany i ternational Mehmet Scholl certainly was not cracking open the champagne. Instead preferring to lambast coach Joachim Löw for his decision to discard his free-flowing 4-2-3-1 template for a more conservative 3-5-2.

“Why change a team which was functioning well,” railed Scholl.

“In 2008 we set up differently and lost to Spain, in 2010 the same thing happened versus the Spaniards and in 2012 against Italy, we tried something new and were sent packing. The key to us winning in Brazil was Low trusting his team, sticking with the same formula from the last-eight on. That’s how you win titles.”

“If Herr Siegentahler wants to do a job, he should stay in bed tomorrow, leave the training to others and not come up with these ideas. ”

Anyone would have thought the Germans had lost.

2. Low surveys the wreckage
If the Germans are to claim their fourth European crown, they will have to do it the hard way. A semi-final against the hosts in the bear-pit atmosphere of Marseille’s Stade Velodrome is tough enough. But just to make it even harder, Bundestrainer, Jogi Löw has all manner of personnel problems to deal with.

Reborn striker, Mario Gomez – who in this tournament has proved considerably more skilful than critics used to give him credit for – is out for the rest of the tournament after damaging a hamstring.

Midfielder Sami Khedira is most unlikely to feature again after damaging a groin, Bastian Schweinsteiger battered right-knee makes him a major doubt for Thursday problems, while inspirational centre-back Mats Hummels, the guy who initiates so many attacks, is suspended.

Time for Löw to reshuffle and recalibrate. Possibly Shkodran Mustafi to take the place of Hummels; Thomas Müller or Mario Götze as the attacking sperahead and Emre Can or Julian Weigl parachuted in to anchor the midfield.

Not that German fans need be unduly concerned. Winning under duress is a DFB speciality and whether the French would admit to it or not, they do suffer from an inferiority complex when facing their neighbours from across the Rhine, not having beaten the Nationalmannschaft in a tournament for 58 long years.

3. Muller steps away from the ‘Elfmeter‘ spot

Thomas Muller misses from the penalty spot in Germany’s quarter-final victory over Italy.

One of seven players to miss during that nerve-shredding shoot-out climax to the Germany v Italy European Championship quarter-final, Thomas Müller, insists he will not volunteer to take another penalty at France 2016.

In having his attempt saved by Gianluigi Buffon, Muller became the first German international to draw a blank in a shoot-out since Uli Stielike did so in the 1982 World Cup semi against France and the Bayern star now hopes to temporarily go to the back of the queue.

“If we go to penalties and I’m needed, I’ll be there, but I won’t push myself forward. I will not be taking any more penalties during a match in the next two weeks. I will work on my penalty technique and come back stronger in a month or two. For now I’ll let others go first.”

4. Dortmund’s options post-Mkhitaryan
Reluctantly forced to cash in on attacking maestro Henrikh Mkhitaryan after Manchester United made them a 40 million euro offer they could not refuse, the high priests at Dortmund already have a short-list of replacements in mind.

Wolfsburg wide-man, Andre Schürrle, who a few years ago played for  current Schwarz-Gelben coach,Thomas Tuchel at Mainz, is one such candidate. So is fellow German international Karim Bellarabi of Leverkusen, while sources in Italy are flagging Dortmunder interest in Fiorentina’s Josip Ilicic, a multi-dimensional Slovenian attacking midfielder.

Schürrle is the one the Ruhr giants are most keen. But will Wolfsburg CEO, Klaus Allofs play ball ?

5 Real target Alaba
Despite badly under-performing for Austria at the European Championships, Bayern Munich utility man extraordinaire, David Alaba, clearly has not lost any of his marketability.

Spanish sports daily AS report that Real Madrid are determined to make the 24-year-old ace one of their marquee signings of the summer and to this end, recently upped their offer from 50 to 65 million euros. Bayern reply that all bets are off unless, 80 million is put on the table, insistent that a player with five years left on his contract is going nowhere.

The “Blancos‘, however, have no intention of giving up the ghost.  Real general manager, Jose Angel Sanchez, has held several meetings in Vienna and Munich with Alaba’s father, George, and at the feeling at the Bernabeu is that David would love to climb on board.