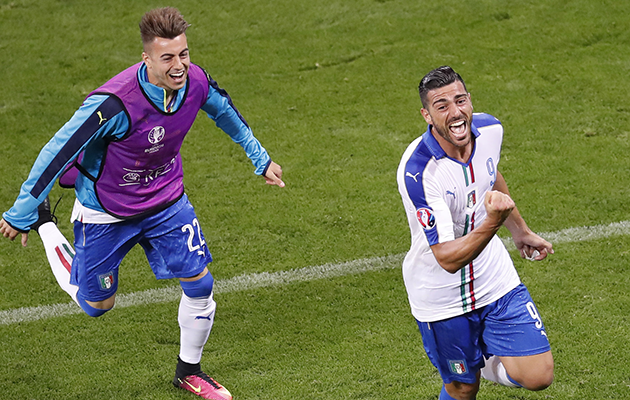 Italy won the first clash of tournament heavyweights, beating Belgium in Lyon thanks to Emanuele Giaccherini’s first-half goal and a late Graziano Pelle strike. Belgium’s makeshift defence struggled to cope with the tactical framework laid down by Italy coach Antonio Conte. The Italian defensive blanket, secured with a series of late, cynical tactical fouls, rarely allowed Belgium’s talented individuals any space. When Kevin De Bruyne and Eden Hazard found space, the finishing of Romelu Lukaku and his replacement Divock Origi, let them down.

Emeuele Giaccherini’s goal. A long, Pirlo-esque pass over the top from Leonardo Bonucci that Belgium’s makeshift defence failed to deal with. Toby Alderweireld allowed the ball to pass over him, Giaccherini controlled with first touch, scored with his second.

Leonardo Bonucci teed up Giaccherini for Italy’s goal and played a dominant role in the centre of Italy’s back three.

On paper, Belgium had more natural talented than the Italians. But Italy coach Antonio Conte deployed a defensive-minded formation that nullified Belgium’s key individuals. In contrast, Belgium coach Marc Wilmots’ tactics were baffling. Though denied first-choice centre-backs Vincent Kompany and Nic Lombaerts through injury, he again ignored one of the Premier League’s best central defensive partnerships, Tottenham’s Toby Alderweireld and Jan Vertonghen. Instead Vertonghen deployed at left-back and Alderweireld paired with Thomas Vermaelen in the middle. Alderweireld was left exposed for Giaccherini’s goal as the ball floated over his head and none of his defensive team-mates arrived to provide any cover.