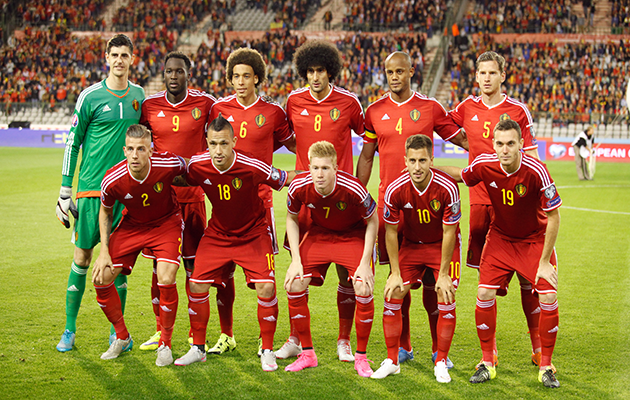 Tottenham midfielder Nacer Chadli was left on the standby list, along with Thorgan Hazard and Kevin Mirallas, after coach Marc Wilmots opted for an extra striker in Michy Batshuayi (Marseille).

Jean-Francois Gillet
9/0
Catania (Ita)
Age 27 (31.05.79)
Third-choice who missed the World Cup after being suspended for match-fixing in Serie A. ON laon at Mechelen for whom he once saved three penalties in one game, against Anderlecht.

Simon Mignolet
16/0
Liverpool (Eng)
Age 28 (06.03.88)
Back-up who rarely plays for Belgium, even in friendlies. Regarded by many Liverpool supporters as a shot-stopper and little more.

Toby Alderweireld
52/1
Tottenham Hotspur (Eng)
Age 27 (02.03.89)
Right-back who is one of the most consistent defenders in the Premier League – where he plays at centre-back.

Laurent Ciman
Montreal Impact (USA)
Age 30 (05.08.85)
A late call-up after the injuries to first-choice centre-backs Kompany, Lombaerts and Boyata. Has spent the last year playing in MLS in Canada after five seasons with Standard Liege.

Jason Denayer
5/0
Manchester City (Eng)
Age 20 (28.06.95)
On loan at Galatasaray. Had a couple of seasons at Anderlecht and later came to prominence at one of Jean-Marc Guillou’s footballing academies

Christian Kabasele
Genk
Age 25 (24.02.91)
Late call-up. Three years ago he was playing as a striker in the second tier, but has become an impressive centre-back at Genk.

Thomas Meunier
5/0
Club Brugge
Age 24 (12.09.91)
Called up as a late replacement and will be a reserve full-back in France. Not totally trusted by Wilmots, who has doubts about his defensive qualities.

Thomas Vermaelen
51/1
Barcelona (Spa)
Age 30 (14.11.85)
Once a cult figure at Arsenal, now spends most weekends on sidelines in Spain. Central defender but can also fill in at full-back.

Jan Vertonghen
74/6
Tottenham Hotspur (Eng)
Age 29 (24.04.87)
Ever present in the league this term until a knee injury in January. A centre-back for his club and left-back for his country

Moussa Dembele
63/5
Tottenham Hotspur (Eng)
Age 28 (16.07.87)
Has had an excellent season with his club. Hard-working and creative, he’s regarded as elegant – on and off the pitch.

Marouane Fellaini
65/15
Manchester United (Eng)
Age 28 (22.11.87)
Struggled to make his mark at United but highly rated by Wilmots. Scored 63 goals in two seasons from defensive midfield as a junior with Anderlecht.

Christian Benteke
24/6
Liverpool (Eng)
Age 25 (03.12.90)
Prior to De Bruyne’s move to Manchester City, he was the most expensive Belgian in world football. A hero with Aston Villa, but struggling at Liverpool.

Romelu Lukaku
41/9
Everton (Eng)
Age 23 (13.05.93)
Was top scorer in the Belgian league at 16 and has remained prolific in the Premier League. Has rarely played well for Belgium, however.

Divock Origi
16/3
Liverpool (Eng)
Age 21 (18.04.95)
Divock is the son of Kenyan international, Mike Origi, who played for a host of Belgian clubs. Origi was a surprise choice for the Brazil World Cup after impressing for Lille. Able to play as a striker or on the wing, he is battling for recognition at Liverpool.