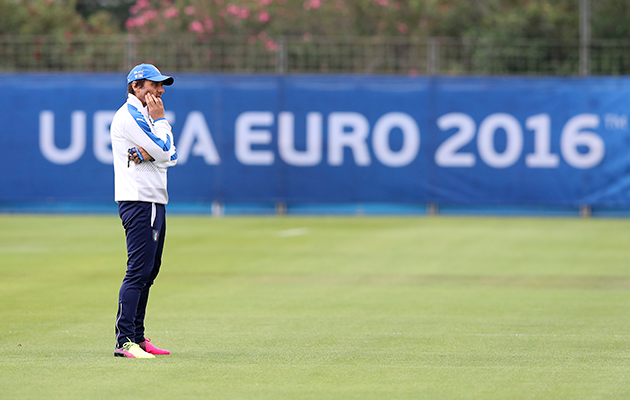 Today’s Group E Euro 2016 clash between Belgium and Italy in Lyon is clearly one of the most interesting of all the “opening” games at these finals.   Thanks to the seeding arrangments, this is probably the first clash between two sides who could both be considered to have serious long term tournament ambitions.

Belgium, the current No. 2 ranked side (behind Argentina) in the FIFA rankings, are clearly everyone’s idea of a bright young thing and one that can call on such as Kevin De Bruyne (Man City), Eden Hazard (Chelsea), Radja Naingolan (Roma), Romelu Lukaku (Everton) et al, not to mention talented coach Marc Wilmots.  Italy, of course, are Italy.

The four times World Cup winners, when they are not crashing out in the first round as they did at the last two World Cups, tend to be a tournament animal.   Twice in the  last four European Championships, they have ended up in the final of tournaments (2000 and 2012) where they started off without much fanfare.   Nor was Italy overwhelmed with media or fan expectations on the “Calciopoli” investigation disturbed eve of their 2006 World Cup win in Germany.

The bottom line is that you write off Italy at your peril.   Furthermore, whatever about the overall quality of this squad (and it is probably a deal stronger than outside observers believe), Italy go into the tournament under the guideance of one of the sharpest talents on the European coaching scene, namely the future Chelsea manager, Antonio Conte.

The former Juventus coach comes from an impressive Italian school that has seen such as Marcello Lippi, Fabio Capello, Roberto Mancini, Giovanni Trapattoni, Carlo Ancelotti and most recently Claudio Ranieri sweep much before them in foreign fields.   At the very least, Conte is in the same category as his illustrious compatriots.

In winning three straight titles with Juventus, in the process putting the Old Lady of Italian football back at the European top table, Conte signalled his undoubted abilities.   If he were to get a tune out of this Italy, it would represent an achievement of equal standing.

A predictable Euro qualification from a group that contained Croatia, Bulgaria, Norway and Malta hardly set the world on fire.   Since then, Italy have lost “prestige” friendlies to Belgium no less (3-1 in Brussels on the night of the Bataclan attacks in Paris) and 4-1 to Germany in Munich in March.

Conte wanted those friendlies against the strongest sides around in order to fully test his own side, discovering for himself and his players just exactly where they stood on the Euro 2016 starting grid.   No Italian coach has ever been seriously worried about losing a friendly or two, if it helped clear his ideas and finalise his preparations.

“From outside (Italy) people don’t have a real vision of this Italian team…The important thing for a team is to have an identity of playing style, a personality and a solidity and Italy has all those things, things which come from two years of coaching done in a certain manner… Italy will do well here in France, they will get through the first round and then, after that, it all depends on the draw…“

All of which is by way of saying that when it comes to naming his team today, Conte is most unlikely to spring any surprises, sticking by and large to the side that qualified for France.   21 of Conte’s 23 were choices that you could have named last winter.   Only the once capped Stefano Sturaro of Juventus and West Ham’s Angelo Ogbonna represent mild surprises.

Not that we expect them to start today.   Rather Conte seems like to start with a Juventus inspired defence of Buffon, Barzagli, Bonucci, Chiellini, with De Rossi playing in front of them in deep midfield in a defence of the armour plated Italian kind.   In midfield we expect worker bees like Parolo and Giaccherini with the onus to creat and attack sitting heavily on Candreva’s shoulders.   Up front, Conte may well stick with Pellè and Eder, who ended up the qualifiers as his preferred first choice.

You might argue that an Italian team which starts with one out of form striker (Eder) and a guy who cannot always get his game at Southampton as its attack is hardly going to frighten anyone.   Perhaps, but if the Conte drive and manic determination goes to work, then all is possible.   In his eve of match press conference yesterday, Belgian coach Wilmots underlined this point, saying:

“Italy are always more dangerous when they appear to be in trouble and then they have a coach who knows how to prepare a team of warriors.   I have a lot of respect for him (Conte)”