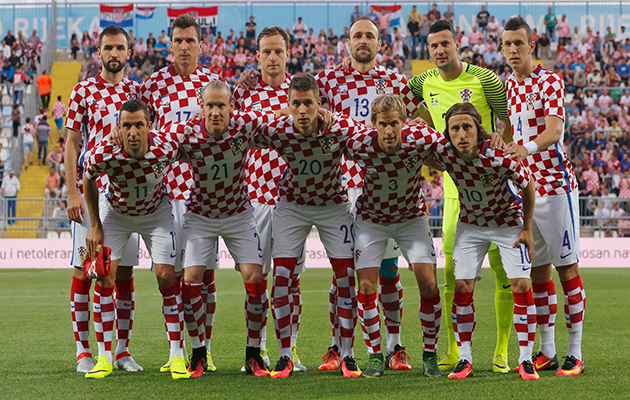 The major casualty of Ante Cacic’s final 23-man selection was Liverpool defender Dejan Lovren, who was dropped following an argument during the March friendly against Hungary.

Cacic ignored the claims of Marin Tomasov and Chelsea’s Mario Pasalic while midfielders Domagoj Antolic and Alen Halilovic were included in the provisional 27-man list but left out of the final 23, with Cacic claiming they would not cope well with being reserves in France.

Tin Jedvaj (Bayer Leverkusen) was the beneficiary of Lovren’s exclusion, while the Dinamo Zagreb trio of Marko Rog, Ante Coric and Duje Cop (Dinamo Zagreb) all made the cut, along with striker Andrej Kramaric who spent the second half of the season on loan at Hoffenheim after failing to break into the Leicester City starting line-up.

Name: Lovre Kalinic
Caps/goals: 4/0
Club: Hajduk Split
Age: 26 (03.04.90)
Tall with extraordinary reflexes. Has a great career in front of him and likely to leave Hajduk soon.

Danijel Subasic
19/0
Monaco (Fra)
Age 32 (27.10.84)
Patiently waited for his chance, which finally came Stipe Pletikosa stepped down. One of the best keepers in Ligue 1.

Ivan Vargic
2/0
Rijeka
Age 29 (15.03.87)
Solid keeper who will join Lazio for next season. Will probably get the nod ahead of Dominik Livakovic as third choice.

Vedran Corluka
87/4
Lokomotiv Moscow (Rus)
Age 30 (05.02.86)
Stopper, usually faultless, one of the key players in the team. Clever reader of the game and good passer.

Tin Jedvaj
2/0
Bayer Leverkusen (Ger)
Age 20 (28.11.95)
Highly-rated young centre-back. Getting his career back on track after an ill-fated move to Roma from Dinamo Zagreb

Gordon Schildenfeld
25/1
Dinamo Zagreb
Age 31 (18.03.85)
Experienced stopper, slow but an excellent reader of the game. Troubled by injuries and eyesight but reborn since a return to Dinamo.

Ivan Strinic
33/0
Napoli (Ita)
Age 28 (17.07.87)
The only real candidate for left-back but not a regular with his club. Attack-minded, delivers an outstanding cross.

Ivan Rakitic
75/10
Barcelona (Spa)
Age 28 (10.03.88)
Great mix of midfield grafter and and creator. Has an extremely accurate shot and a clever provider of assists.

Nikola Kalinic
27/8
Fiorentina (Ita)
Age 28 (05.01.88)
Good all-round striker, who can shoot with both feet and a useful provider of assists. A Europa League finalist with Dnipro in 2015 before joining Fiorentina.

Andrej Kramaric
10/4
Hoffenheim (Ger)
Age 24 (19.06.91)
Natural goalscorer who has recovered his career in Germany after failing to make an impact at Leicester.