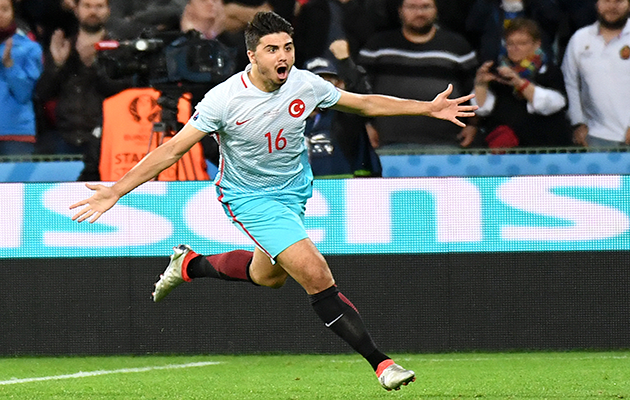 Turkey defeated the Czech Republic 2-0 in Lens, a victory which keeps alive their chances of reaching the knockout stages.

The Czech Republic players gave their all and dominated the possession and territorial statistics but ultimately they were found wanting up front. In contrast, Turkey, of whom much was expected before the competition, finally arrived at Euro 2016. Whether it is too late to ensure they remain in the tournament remains to be seen.

Fatih Terim’s side took the lead swith a sweeping breakaway move which saw Arda Turan feed Emre Mor and the youngster picked out Burak Yılmaz who finished clinically at the near post. The Czech Republic produced a spirited fightback but in the absence of the injured Tomas Rosikcy, they lacked the guile to break down a Turkish defence that was well-marshalled by the impressive Mehmet Topal.

Shorly after the hour mark, Ozan Tufan wrapped up the points for Turkey with a near post snap shot which gave Petr Cech no chance.

Ozan Tufan killed off faint Czech Republic hopes with his second half goal. Until that point, Pavel Vrba’s men were competitive and looked the likelier of the two sides to score.

Man of the match:
Countless Czech Republic attacks were repelled by Mehmet Topal. Arda Turan may be the skipper of the side but it was the central defender who led by example and embodied the Turks’ never-day-die attitude.

Turkey won the match and celebrated as if they had had reached the last 16, but given given Uefa’s comvoluted qualifying process they will have to wait another 24 hours find out if the victory over the Czech Republic will prolong their time at Euro 2016.

Talking point:
Somewhat predictably, given that he is predominatly left-footed and of diminutiuve stature, Turkey’s 18-year-old prodigy, Emre Mor, has been dubbed the Turkish Lionel Messi. But there were signs in Lens with Mor’s close dribbling skills and excellent awareness, that European football has an emerging star on its hands.