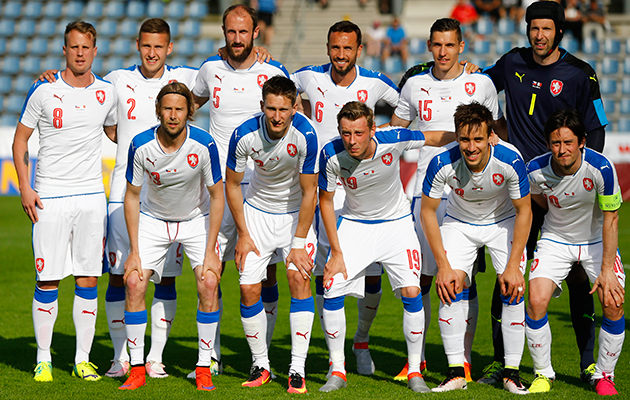 Veteran midfielder Tomas Rosicky was the surprise inclusion in the final 23 despite playing only a few minutes for Arsenal in an injury-ravaged season, his last for the London club.

Those who failed to make the cut after being included in a provisional 28-man squad included midfielder Lukas Marecek and strikers Matej Vydra and Patrik Schick.

Slavia Prague’s Milan Skoda got the nod ahead of Vydra while Roman Hubnik was a surprise selection as an extra defender.

Midfielders Martin Frydek and Lukas Vacha failed to make the  provisional 28-man list after falling out of favour following injuries during the season.

Name: Petr Cech
Club: Arsenal (Eng)
Age: 34 (20.05.82)
Undisputed first-choice and still one of the world’s great keepers, despite occasional gaffes. Sidelined at Chelsea but flourishing with Arsenal, who he joined last June. Recently named Czech player of the season for an eighth time, he will consider his international future after the tournament.

Tomas Koubek
Sparta Prague
Age 23 (26.08.92)
Third-choice who has been on loan at Slovan Liberec this season. Started in all three group games at the Euro Under-21 Championship in 2015 and made his senior debut this March, against Scotland. Cites going to the barber as one of his great pleasures in life.

Tomas Vaclik
Basle (Swi)
Age 27 (29.03.89)
Experienced, dependable back-up to Cech who won the domestic double with Sparta Prague in 2014 before moving to Basle, where he won the Swiss title and played in the Champions League group stage. Once won a fair-play award for admitting he had given away a corner in a Czech league game.

Theodor Gebre Selassie
Werder Bremen (Ger)
Age 29 (24.12.86)
Nippy right-back who has also played on the left and has been a right-sided midfielder for his club. Born and raised in the Czech Republic, he is the son of an Ethiopian father and a Czech mother and was the country’s first non-white senior international.

Michal Kadlec
Fenerbahce (Tur)
Age 31 (13.12.84)
Experienced central defender who can also play at left-back and is the son of Euro 96 captain Miroslav Kadlec. A keen cycling fan who plans to ride the Tour de France’s mountainous Alpe d’Huez stage when he retires.

David Limbersky
Viktoria Plzen
Age 32 (06.10.83)
Quick left-back who only began to fulfil his potential after returning to Plzen in 2005 and is now a regular in the national side. Vrba has kept faith with him despite a drunk-driving controversy last year, compounded by a moronic “steering wheel” goal celebration.

Daniel Pudil
Watford (Eng)
Age 30 (27.09.85)
Much-travelled left back or left-sided midfielder who narrowly missed out on Euro 2008 and Euro 2012 but, thanks to good form on loan at English second-tier side Sheffield Wednesday, it should be third-time lucky. Had a reputation for rowdy behaviour earlier in his career, including a drink-driving conviction.

Tomas Sivok
Bursaspor (Tur)
Age 32 (15.09.83)
Experienced central defender who can also play in midfield. Based in Turkey for almost eight years, initially with Besiktas, he joined Bursaspor last June. Strong in the air with good positional sense, he struggled with a mystery injury last season that was eventually treated by simply changing the insoles in his boots.

Marek Suchy
Basle (Swi)
Age 28 (29.03.88)
Tough central defender who will be suspended for the opening game after being sent off in October’s qualifier against Holland. Won two league titles career at Slavia Prague and proposed to his wife, Alena, on Red Square while playing for Spartak Moscow. Has won the Swiss championship and gained Champions League experience since moved to Basle in 2014,.

Vladimir Darida
Hertha Berlin (Ger)
Age 25 (08.08.90)
Small but extremely hard-working central midfielder whose excellent recent form reportedly attracted interest from Real Madrid. Played with Vrba at Viktoria Plzen, where he was a key member of the 2013 title-winning team. Scored the goal, against Latvia, that clinched qualification.

Borek Dockal
Sparta Prague
Age 27 (30.09.88)
Skilful central or right-sided midfielder who is likely to take on a key creative role in Tomas Rosicky’s absence. The side’s top scorer in qualification, with four goals, he is particularly dangerous from long range. Joined Sparta in 2013 after spells with Rosenborg of Norway and Konyaspor of Turkey. Captained the Czech under-21 team at the 2011 Euros and is a keen fisherman.

Roman Hubnik
Viktoria Plzen
Age 31 (24.03.92)
Centre-back and surprise inclusion in the final 23 after featuring as a back-up in the qualifiers.

Daniel Kolar
Viktoria Plzen
Age 30 (27.10.85)
Fast, attacking midfielder with an eye for goal, who could stand in for Rosicky. Played under Vrba at Plzen, where has been a key figure since 2008, winning three Czech titles and playing in the Champions League. Has shown remarkable character since losing his wife Tereza to cancer in 2014.

Ladislav Krejci
Sparta Prague
Age 23 (05.07.92)
Very quick left-sided midfielder who’s back to his best after a dip in form. Has a tattoo of Czech patron saint Vaclav (of Good King Wenceslas fame) on his right arm and a tattoo of a four-leaf clover on his right hand, which he kisses after scoring.

David Pavelka
Kasimpasa (Tur)
Age 25 (18.05.91)
Left-sided or defensive midfielder who started the last four Euro qualifiers. Unwanted at Sparta Prague, he left for Slovan Liberec, where he earned the captain’s armband, and scored a memorable goal against Sevilla in the Europa League. Moved to Turkey in January but sidelined by a broken rib in March after colliding with team-mate Olivier Veigneau.

Jaroslav Plasil
Bordeaux (Fra)
Age 34 (05.01.82)
Classy, versatile midfielder who has spent almost all his career outside the Czech Republic. Played at the last three Euros plus the 2006 World Cup. Picked up a knee ligament injury in February but is likely to figure in Vrba’s squad if fit. Speaks five languages.

Tomas Rosicky
Arsenal (Eng)
Age 35 (04.10.80)
Veteran captain and the most talented Czech player of his generation, who surprisingly made the squad despite being sidelined by injury all season.

Jiri Skalak
Brighton & Hove Albion (Eng)
Age 24 (12.03.92)
Attacking midfielder or forward whose two-footedness and ability to take on defenders led to his promotion from the under-21 team. One of the stars of the domestic league last year, his selection could depend on the amount of first-team football he gets at Brighton, who he joined from Mlada Boleslav in January.

Josef Sural
Sparta Prague
Age 26 (30.05.90)
Attacking midfielder and free-kick specialist who’s developed into one of the Czech league’s biggest stars. Excellent performances for Slovan Liberec, where he played in the Europa League group phase in 2013-14, prompted a bidding war between Prague rivals Slavia and Sparta over the winter.

David Lafata
Sparta Prague
Age 34 (18.09.81)
Sparta Prague, Czech Republic
Experienced forward, who was originally a wide midfielder, with a phenomenal domestic scoring record. The Sparta captain has topped the Czech league goal charts in four of the last five seasons but struggled with injury problems during the current campaign. Hunts pheasant and wild boar in his spare time.

Tomas Necid
Bursaspor (Tur)
Age 26 (13.08.89)
Tall, powerful striker who is back in form after a barren spell that began with a recurring knee-ligament injury. Joined Bursaspor from CSKA Moscow last summer, having fallen out of favour at the Russian club and been loaned out to PAOK of Greece, Slavia Prague and Dutch side Zwolle. Recalled to the national team in 2014.