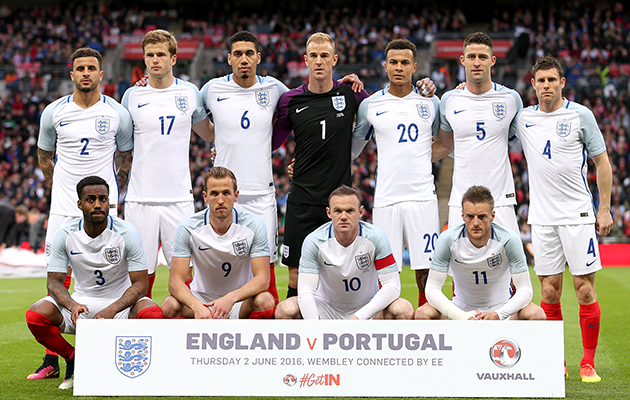 Veteran midfielder Tomas Rosicky was the surprise inclusion in the final 23 despite playing only a few minutes for Arsenal in an injury-ravaged season, his last for the London club.

Those who failed to make the cut after being included in a provisional 28-man squad included midfielder Lukas Marecek and strikers Matej Vydra and Patrik Schick.

Slavia Prague’s Milan Skoda got the nod ahead of Vydra while Roman Hubnik was a surprise selection as an extra defender.

Midfielders Martin Frydek and Lukas Vacha failed to make the provisional 28-man list after falling out of favour following injuries during the season.

Joe Hart
57/0
Manchester City
Age 29 (19.04.87)
One of the team’s biggest personalities. Has suffeed dips in form and injuries but has come back stronger.

Danny Rose
2/0
Tottenham Hotspur
Age 25 (02.07.90)
Recent debutant at left-back. In great form for Spurs this season and has become his country’s number one.

Ross Barkley
21/2
Everton
Age 22 (05.12.93)
Promising young all-rounder with good mix of technique, vision and tenacity. Not enjoyed the best of seasons with Everton.

Jordan Henderson
26/0
Liverpool
Age 25 (17.06.90)
A Hodgson favourite and midfield all-rounder who has recovered from a knee injury in time to make the squad.

Adam Lallana
21/0
Liverpool
Age 27 (10.05.88)
A clever ball player with passing and dribbling ability, mostly on the left. Another Hodgson favourite.

Raheem Sterling
20/2
Club: Manchester City
Age 21 (08.12.94)
Speedy, skiful winger who has coped well with the £50m price tag this season. Has receovered from injury in time for the Euros.

Marcus Rashford
1/1
Manchester United
Age 18 (31.10.97)
Teenager who has enjoyed a phenomenal rise from under-18 trainee to England senior in five months. Scored on his England debut against Australia.