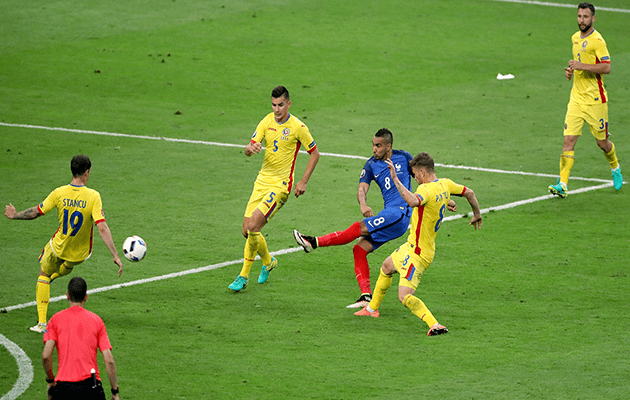 A stunning Dimitri Payet goal two minutes from time gave the hosts a 2-1 win over an obdurate Romania side. Olivier Giroud gave France the lead shortly before the hour mark, but seven minutes later Patrice Evra brought down Nicolae Stanciu in the penalty area and from the resulting spot-kick Bogdan Stancu equalised. Then, with time running out and anxiety growing in the stands, Payet produced a moment of high quality to settle match.

A goal worthy of winning any game and it came from the best player on the pitch. Payet cuts in from the right and unleashes a curling, venomous strike from the edge of the area. The goalkeeper had no chance. 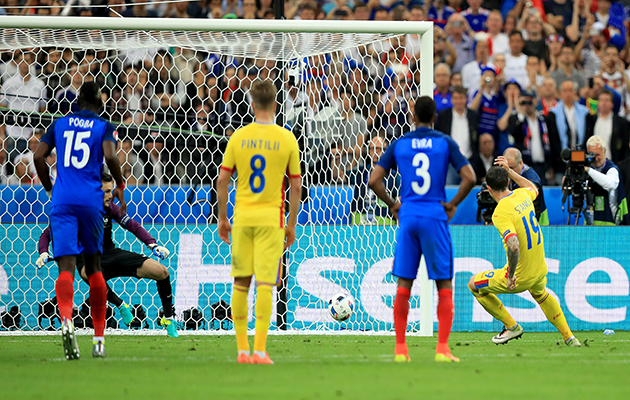 Stanciu converts from the penalty spot to draw Romania level.

Bogdan Stancu sends Lloris the wrong way from the penalty spot. The script has been well and truly torn up. France coach Didier Deschamps immediately withdraws the disappointing Griezmann and brings on Kingsley Coman.

Evra clips Nicolae Stanciu as he bursts into the French penalty area and after a moment’s hesitation the referee points to the spot. 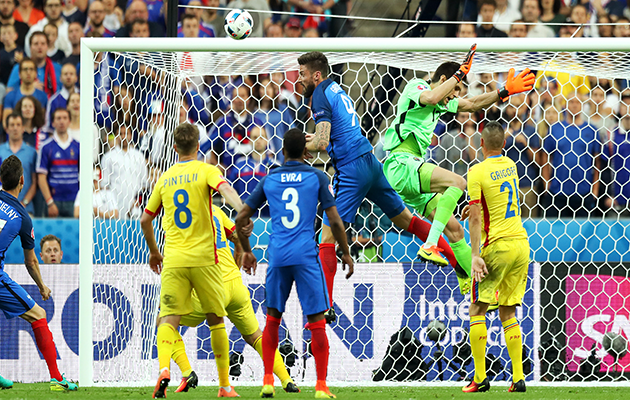 Olivier Giroud puts France ahead in their Group A game against Romania.

Giroud breaks the deadlock. Payet, who has been the best player on the pitch, is the creator, as he floats a cross in from the right. Giroud and the Romanian keeper Ciprian Tatarusanu leap for the ball, but it is the striker who gets the final, decisive touch to put the hosts ahead.

It’s not been Stanciu’s night. He should have scored twice now. This time, he makes a good late run to beat the offside trap and as the ball comes in from the right he chests the it down before volleying tamely wide. France have dominated possession in Paris, but arguably the best two chances have fallen to Romania.

A goalless first half but not an uneventful one. Romania almost stunned the hosts in the third minute when Stanciu’s close range effort was blocked on the line by Lloris. Thereafter, Iordanescu’s side retreated into their shell and it was France who made all the running. Griezmann hit the post with a header and was unlucky to see his goalbound show deflected just past the post after good work by Dimitri Payet.

A lovely pass from Paul Pogba finds Bacary Sagna down the right flank and his first time cross is missed by Antoine Griezmann, but the ball loops off the retreating Romanian defender into the path of Griezmann, whose header cannons off the post.

Romania should be ahead. An inswinging corner is flicked on at the near post to the unmarked Nicolae Stanciu who, from no more than three yards out, volleys the ball straiught at Hugo Lloris in the French goal. The keeper did well, but that really should have been 1-0 to Anghel Iordanescu’s side. How crucial will that miss be? 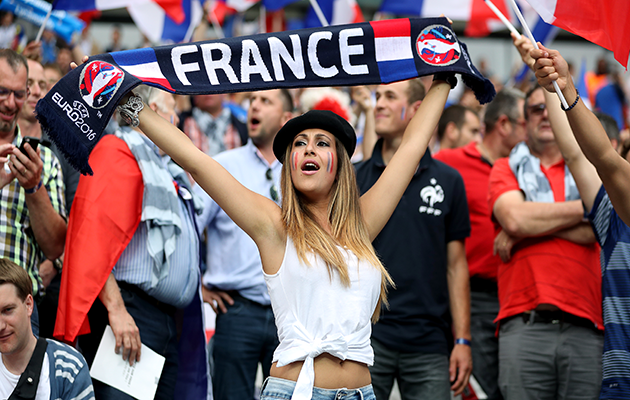 The starting line-ups for tonight’s opening game have been announced.

Anthony Martial doesn’t start for France, but West Ham’s Dimitri Payet is selected on the left. Arsenal’s Olivier Giroud plays through the middle with Antoine Griezmann, tipped by many to be one of the stars of the tournament, operating from the right.

Romania’s line-up is a lot less familiar than their opponents. The focus will be on their defence, which conceded just two goals in ten qualifying matches – the lowest of any team at the finals.

To read our full preview of thegame, click here. 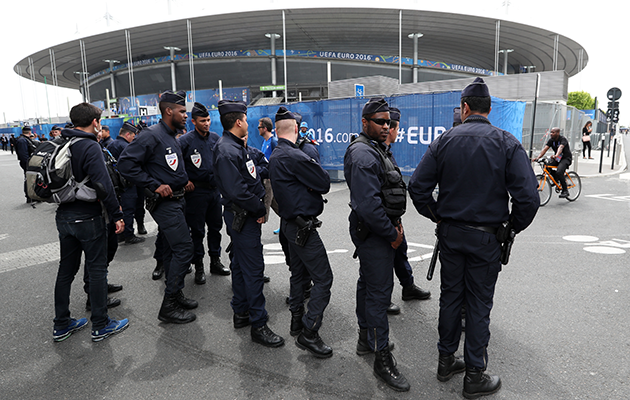 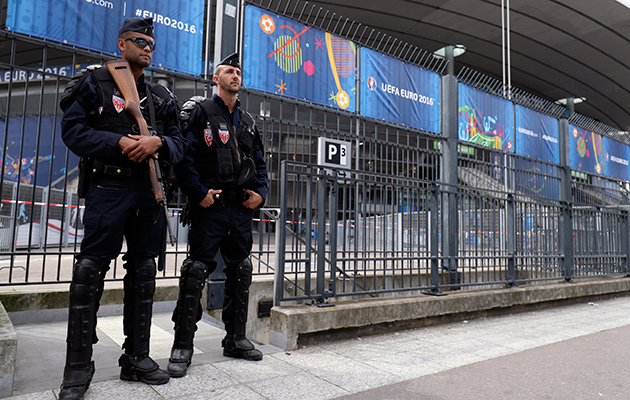 There’s no getting away from the fact that due to the threat of terror attacks, security at the Euro 2016 finals will be carried out on a huge and unprecedented scale. Officials have asked spectators to arrive at the stadium three hours before kick-off, to ensure they can be processed by security personnel prior to the game.

Just a reminder that we have previews of all 24 countries plus profiles of every single player takimng part at the Euro 2016 finals. Just head to our main Euro 2016 page for all the relevant links. 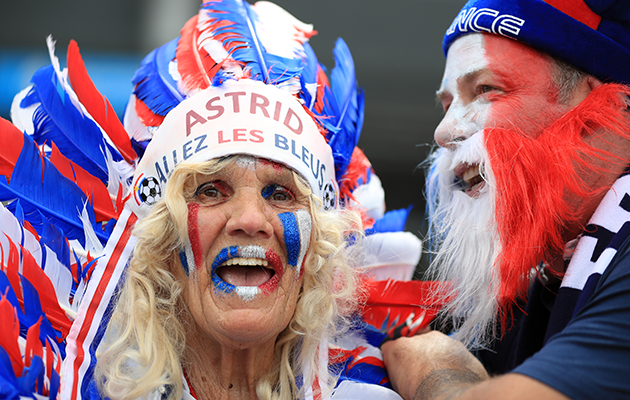 France fans soak up the atmosphere outside the Stade de France. 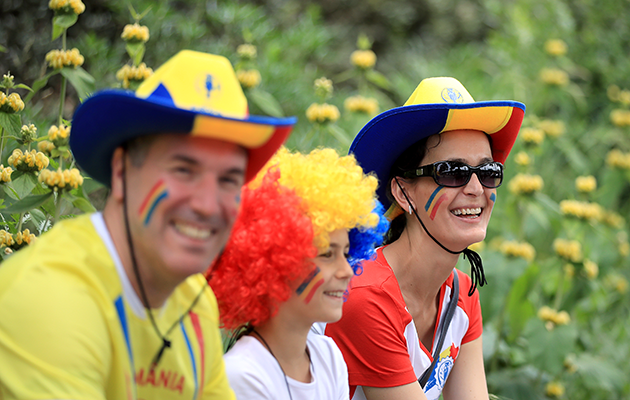 Romania fans all smile outside the Stade de France ahead of the Euro 2016 opener.. 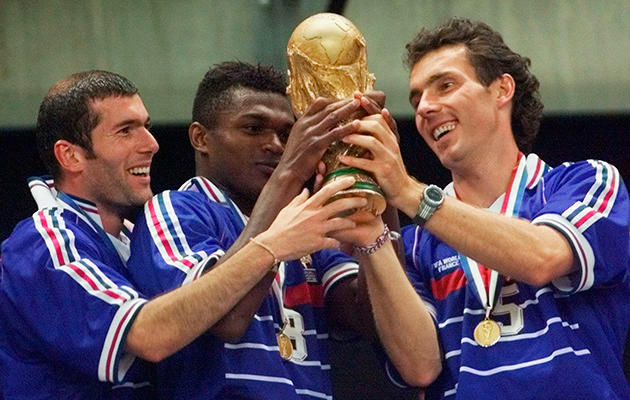 When France won the 1998 World Cup on home soil, there was much talk of the win being a potent symbol of a new, united, multiracial nation. However, as Paddy Agnew reports, it didn’t quite turn out like that and 18 years on, France remains a country divided on racial and even religious lines. Indeed, if the host country was to repeat that success, few people will regard it as anything other than a sporting triumph. 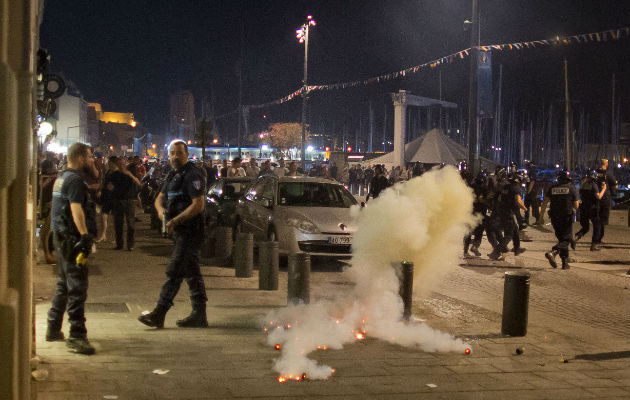 Tear gas was used my police in Marseille.

The English FA has issued a statement condeming the violence that took place in Marseille late in Thursday. Two England fans were arrsted and one injured when scuffles broke out with local youths. Mercifully, the trouble was shortlived and there have been no reports of any further violence taking place in the port city today.

Neuer ready to step into the breach

With Joachim Low’s World cup winning skipper Bastian Schweinstieger an injury doubt for Germany‘s opening Euro 2016 match against Ukraine, we hear from Manuel Neuer, a born leader, who is ready to step up to the plate.

The opening match of Euro 2016 sees hosts and favourites France face Romania in what should provide a match of contrasts. Here’s our match preview of the Group A game. 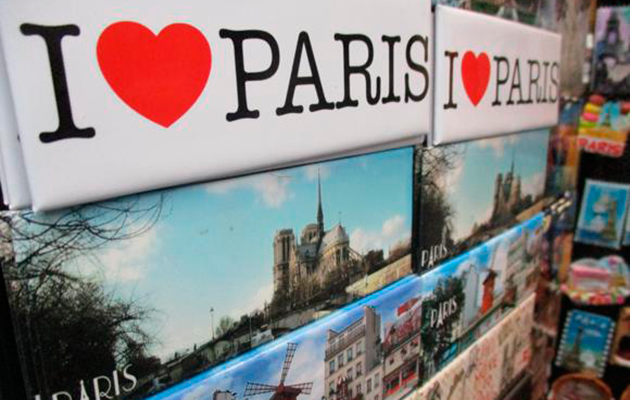 Everything you ever wanted to know about Paris…

Peterjon Cresswell, our resident guide to the world’s best football stadia, has excelled himself with this superb guide to Paris and the Stade de France.

Find out the best places to stay, how to get around and where to go if you fancy something to eat or drink en route to France’s national stadium. .

The wait is over

The waiting is over and Euro 2016 has finally arrived.

The tournament kicks off in Paris tonight when hosts France face Romania at the Stade de France. France coach Didier Deschamps who comes under the dual pressures of coaching the hosts and also the team favoured to win the tournament, was in a relaxed mood on the eve of the finals.

We’ve got interviews with Deschamps, his Romanian counterpart Anghel Iordănescu, as well as tactical analyses of both teams, player interviews, and profiles of each squad member. Simply click on the country name on the right-hand panel to access a wealth of information about both teams. 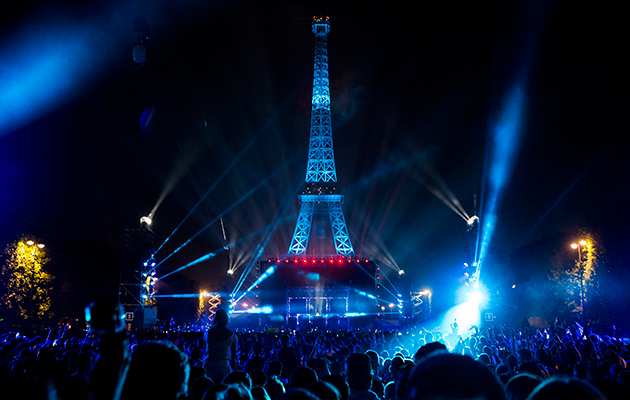 A concert by French DJ David Guetta in the fan zone near the Eiffel Tower, as part of the upcoming Euro 2016 finals entertainment.