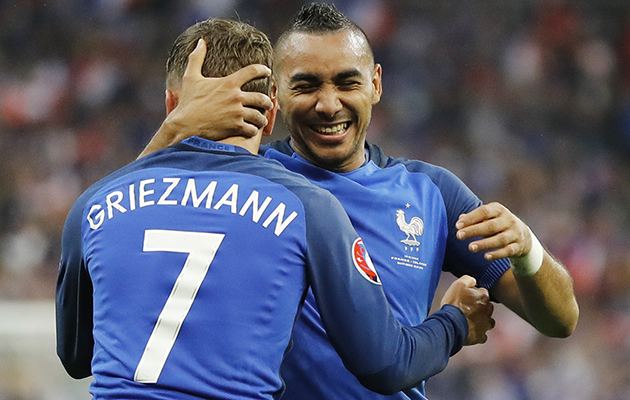 Hosts France will play Germany in the semi-final in Marseille on Thursday after they tore Iceland apart at Stade de France, winning 5-2 with their most assured performance of the tournament so far.

Although Iceland scored twice in the second half, the result was never in doubt. This was a polished, confident display from the hosts who took a tired Iceland apart with some accomplished team moves.

For Iceland, their adventure was over but they left the tournament having won many new admirers and demonstrated the value of team spirit and collective endeavour.

Iceland, as expected, were set up in a compact, well-organised 4-4-2 but the dangers of playing a high defensive line were exposed early on when Blaise Matuidi played a simple ball over the top of the Icelandic defence which Giroud reached with a well-timed run and then flashed his shot through the legs of Iceland keeper Hannes Hallgrimsson for the opening goal.

It was the first time that France had scored in the first half during the tournament, and another goal followed shortly afterwards. Pogba rose above Kari Arnason to head Griezmann’s corner into the far corner. So far, so easy for France, although debutant Samuel Umtiti had to be alert when Arnason almost got on the end of Gylfi Sigurdsson’s knock-on from a long throw.

Payet added a third, a low left-foot shot from the edge of the area from a Griezmann lay-off after Giroud had headed down Sagna’s cross.

The fourth goal arrived on the stroke of half-time, Griezmann running onto Giroud’s back-heeled lay-off and dinking a cheeky lob over Hallgrimsson.

Any hope that France would spare Iceland – and England – any further embarrassment in the second half ended when Giroud headed in Payet’s free-kick. By then, Iceland had pulled a goal back after Kolbeinn Sigthorsson turned Gylfi Sigursson’s cross past Hugo Lloris at the near post.

Iceland, willed on by their noisy fans, continue to pose a threat from set-pieces. Substitute Sverrir Ingason’s close-range header drew an excellent save from Lloris. And Birkir Bjarnason scored a second with a late header.

Griezmann’s goal, France’s fourth, tore Iceland apart. Samuel Umtiti’s ball from the back was from flicked on by Giroud to Griezmann, whose confident finish exemplified French superiority.

France became the first team to score four goals in the first half of a European Championship match.

For the first time European Championship history all eight quarter-finalists scored in their respective games.

Iceland’s noisy fans sang throughout the second half and were rewarded with two goals from their side. Their intimidating thunderclap chant was adopted by the French crowd at Stade de France, but without the same intensity.