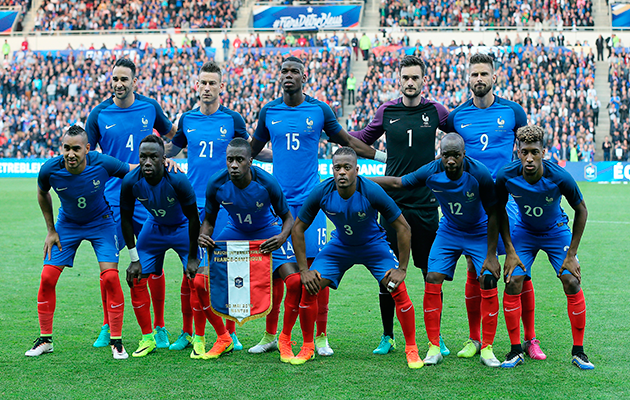 France were hit by a series of injures in the weeks before the tournament. Defenders Raphael Varane (hamstring) and Jeremy Mathieu (calf) and midfielder Lassana Diarra (knee) all dropped out, while Mamadou Sakho was absent after failing a drugs test.

Left-back Lucas Digne was selected ahead of Layvin Kurzawa while Eliaquim Mangala came in for Sakho.  Morgan Schneiderlin replaced the injured Diarra while Adil Rami and Samiel Umtiti came in for Varane and Mathieu.

Yohan Cabaye made the final 23 as Dider Deschamps opted for an extra midfielder, with forwards Alexandre Lacazette and Hatem Ben Arfa only on standby.

Name: Benoit Costil
Caps/goals: 0/0
Club: Rennes
Age: 28 (03.07.87)
Has made over 200 appearances for his club side and has long been seen as a top-class stopper. Standing 6ft 2in tall, he has represented France at every level from under-16 upwards, but a first senior international appearance still eludes him.

Steve Mandana
22/0
Marseille
Age 31 (28.03.85)
Born in what is now DR Congo, his parents moved to Normandy when he was two. An unused squad member at Euro 2008, 2010 World Cup and Euro 2012, he missed the 2014 World Cup after sustaining a neck injury just weeks before the finals. Has three younger brothers who are all goalkeepers.

Defenders
Lucas Digne
12/0
Paris Saint-Germain
Age 22 (20.07.93)
Left-back who spent last season on loan at Roma. Has represented France at all levels from under-16 upwards.

Patrice Evra
71/0
Juventus (Ita)
Age 35 (15.05.81)
Many thought the Senegal-born son of a diplomat was on his way out when he left Manchester United in 2014, but his fine performances at left-back for Juve have seen him likely to make this summer’s tournament. Comes from an extended family of 24 siblings.

Christophe Jallet
11/1
Lyon
Age 32 (31.10.83)
Played just shy of 200 games for Paris Saint-Germain before being sold to Lyon in 2014 when he was considered not up to Qatari standards. Has nonetheless been a solid right-back for his latest club and forced his way back into the international reckoning last year, in part due to the difficult season endured by Mathieu Debuchy.

Laurent Koscielny
27/0
Arsenal (Eng)
Age  30 (10.09.85)
A central defender of genuine international class, he is a fierce competitor who adds steel to any backline. Once invested money in a struggling accordion business in his hometown of Tulles.

Eliaquim Mangala
8/0
Manchester City (Eng)
Age 25 (13.02.91)
Centre-back who has not been totally convincing at City since a £42m move from Porto. Has never played for a French club.

Adil Rami
26/1
Valencia (Spa)
Age 30 (27.12.85)
Centre-back of Moroccan heritage who won the Europa League with Sevilla. A late call-up despite not being on the original standby list.

Bacary Sagna
55/0
Manchester City (Eng)
Age 33 (14.12.83)
Has had a decent season at City and looks likely to end up as first choice on the right flank in France. His trademark cornrow hairstyle may have gone but the former Auxerre and Arsenal man is a still a force to be reckoned with.

Samuel Umtiti
0/0
Lyon
Age 22 (14.11.93)
Cameroon-born centre-back who has come through the ranks at Lyon. Uncapped and called up following injuries.

Lassana Diarra
33/0
Marseille
Age 31 (10.03.85)
Previously with Chelsea, Arsenal, Real Madrid and Lokomotiv Moscow, among others, and in fine form since returning to Marseille in July 2015. This will surely help him forget a terrible time when he didn’t play for a year after a serious contract dispute with the Russian club.

N’golo Kante
2/1
Leicester City (Eng)
Age 25 (29.03.91)
Arrived in England from Caen in July last year and has performed wonders for Leicester. Has a huge appetite for work and really knows how to make a tackle. Was called up to the senior squad for the first time in March, scored on his first start against Russia, and many feel he will add real dynamism to the French midfield.

Blaise Matuidi
42/7
Paris Saint-Germain
Age 29 (09.04.87)
Acknowledged as the best midfielder in Ligue 1, he joined PSG from Saint-Etienne in 2011 and has seen off all comers to become a firm favourite in the capital. Breaking up play effectively and supports both defence and attack with lung-busting runs. Also weighs in with spectacular and important goals.

Dimitri Payet
West Ham United (Eng)
17/2
Age 29 (29.03.87)
Attacking midfielder who has had a fantastic first season in England. Can both score and create goals, and takes a deadly free-kick. Has yet to win a trophy in his professional career.

Paul Pogba
29/5
Juventus (Ita)
Age 23 (15.03.93)
Mostly deployed as a box-to-box powerhouse, but also adept as a deep-lying protector or as a playmaker. Technically proficient, with a considerable physical presence, he was player of the tournament when France won the Under-20 World Cup in 2013 and played in all five games at the World Cup in Brazil a year later.

Morgan Schneiderlin
15/0
Manchester United (Eng)
Age 26 (08.11.89
Midfield shield who was a late replacement for the injured Lassana Diarra. Not a regular in his first season at United.

Moussa Sissoko
35/1
Newcastle United (Eng)
Age  26 (16.08.89)
A powerhouse midfielder who wasn’t particularly fancied by former France boss Laurent Blanc. Deschamps, however, is a fan and has made him a key member of his squad. He shares his name with a well-known fictional character from French cartoon strip Aya de Yopougon.

Forwards
Kingsley Coman
3/1
Juventus (Ita)
Age 19 (13.09.96)
The teenage Parisian has already played for three massive clubs in Paris Saint-Germain, Juventus and Bayern Munich, where he’s currently on a two-year loan deal. His ability to deliver a killer ball and his all-round game in Germany has made everyone sit up and take notice this season. Has represented France at every level from the under-16s upwards.

Andre-Pierre Gignac
24/7
Tigres (Mex)
Age 30 (05.12.85)
Left Marseille for Mexico in June last year and is the first Frenchman playing outside of Europe to appear for the national team. Has the experience to give Deschamps attacking options this summer.

Olivier Giroud
47/14
Arsenal (Eng)
Age 29 (30.09.86)
Despite not looking like a natural at the highest level, he has his fans in the French management team and will relish the chance to shine on home soil. He has plenty of admirers elsewhere too, after posing for French gay mag Tetu in 2012.

Antoine Griezmann
26/7
Atletico Madrid (Spa)
Age 25 (21.03.91)
Despite having never played for a French club, he is a firm favourite in his homeland thanks to his exciting attacking style and knack of scoring spectacular goals. After being spotted as a 14-year-old by Real Sociedad, he signed for Atletico Madrid in 2014 and French fans voted him onto the cover the country’s version of the FIFA 16 computer game.

Anthony Martial
8/0
Manchester United (Eng)
Age 20 (05.12.95)
Blessed with strength, power, quick feet and a quick brain, he became the most expensive teenager in history when joining United from Monaco for £36m in September.