Germany reached their eighth European Championship semi-final after beating Italy in an epic penalty shoot-out following a 1-1 draw in Bordeaux.

It was Germany’s first tournament victory over Italy in nine attempts and was achieved despite three German players missing their penalties during the shootout.

Jonas Hector hit the winning penalty for Germany, the 18th of the sudden-death shootout, after Italy’s Matteo Darmian had seen his weak shot saved by Manuel Neuer.

The two European heavyweights had matched each other over 120 minutes in what would have made for a worthy Final. Mesut Ozil gave Germany a deserved lead early in the second half but Italy rallied and won a late penalty, conveted by Leonardo Bonucci, to take the game into extra-time.

Germany coach Joachim Low had ditched his favoured 4-2-3-1 formation in a switch to a back three, with defender Benedikt Howades brought in at the expense of Julia Draxler. While the change gave Germany extra bodies in midfield with which to contain Italy’s wing-backs, it succeeded only in killing the game for most of the first half.

Midfield pressing produced sloppy passing by both sides as the early fevered atmosphere dipped. Germany lost Sami Khedira to an early injury and his replacement, Bastian Schweinsteiger, saw a headed goal disallowed for a clear push on Mattia De Sciglio.

The game sparked into life in the final five minutes of the half. Quick thinking by Manuel Neuer released a German attack but Mario Gomez headed Joshua Kimimich’s cross over. Then Thomas Muller scuffed his effort after a long-range shot from Toni Kroos pinballed back across the area.

Italy had chances, too. Stefano Sturaro’s fierce shot was deflected wide by Jerome Boateng’s intervention wide after a Emanuele Giaccherini cross had been steered out of Eder’s path by Neuer. 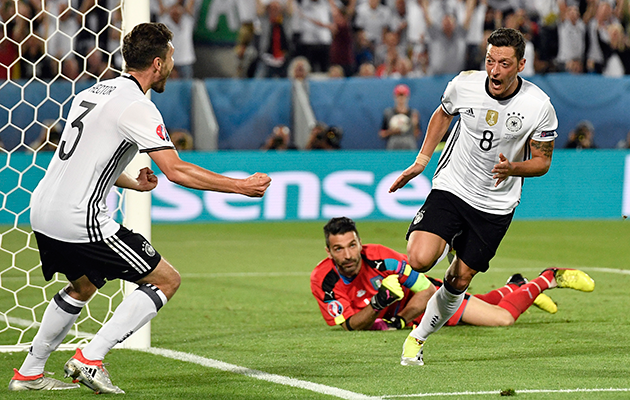 Germany enjoyed greater possession at the start of the second half and it looked as if they would turn this to their advantage. Thomas Muller’s shot was cleared by Alessandro Florenzi’s acrobatic off-the-line clearance and then Germany made the breakthrough. Mario Gomez held the ball up on the left flank and cleverly played in wing-back Jonas Hector, who ran to the byline and pulled a cross back for the onrushing Ozil to stab the ball past Gianluigi Buffon. Ozil had been a peripheral figure up until then but his run into the area was perfectly timed.

Gomez almost grabbed a second for Germany soon afterwards but his cheeky backheel was brilliantly pushed over the bar by Buffon.

Italy had never been behind to Germany at a major tournament before and it looked as if the world champions would go on to win. Italy dug deep, pressing and winning many second balls, and were fortunate to win a penalty after Jerome Boateng was adjudged to have handled in the area. Boateng, one of the outstanding defenders of the tournament, had raised his both arms above his head as he challenged Giorgio Chiellini. The ball bounced off the Italian’s chest and hit Boateng’s outstretched right arm. 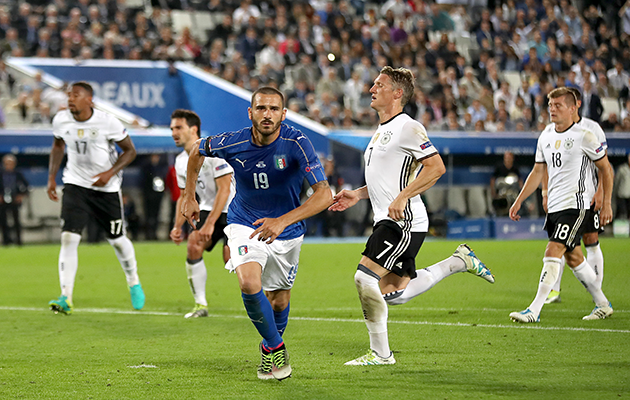 Another defender, Leonardo Bonucci, surprisingly took the penalty, his first at international level. Neuer dived the right way, but Bonucci’s firm low shot evaded him and Italy were level.

Into extra-time and a battle between two goalkeeping giants, Buffon and Neuer, loomed. Germany showed more attacking intent than Italy in the extra period. Draxler, on for the injured Gomez, went close with a close-range overhead kick that flew just over. Another sub, Lorenzo Immobile, almost scored for Italy with a jinking run into the area.

In the resulting shoot-out, a series of missed kicks saw the penalty sequence go into sudden death. Simone Zaza and Thomas Muller were the first to miss, then Mesut Ozil and Graziano Pelle, followed by Leonardo Bonucci and Bastian Schweinsteiger.

Three players from each side converted their sudden-death kicks before substitute Matteo Darmian hit a weak shot that was easily saved by Neuer. Jonas Hector then dispatched the winning penalty, the 18th of the shoot-out, to send Germany into the semi-finals.

Gianluigi Buffon’s point-blank save to deny Mario Gomez. It stopped a second German goal and minutes later Italy won the penalty that took the game into extra-time and penalties.

Manuel Neuer held his nerve to save Matteo Darmian’s kick in the penalty shoot-out and set up Germany’s victory. Germany’s keeper also stopped Leonardo Bonucci’s kick in the shoot-out after the Italian had scored his side’s equaliser from the spot in regular time.

Twelve of the 22 starters began the match facing suspension if they were booked. Of the 12, Mattia De Sciglio, Mats Hummels and Graziano Pello collected yellow cards that ruled them out of their next match.

The shoot-out produced some of the worst penalty misses seen at a European Championship. Simone Zaza was the first to miss for Italy even though he was brought on with seconds of extra-time remaining, specially to take a penalty in the shootout. Graziano Pelle’s effort, which flew high and wide, was particularly poor. Three Germans – Thomas Muller, Mesut Ozil and Bastian Schweinsteiger – missed, the first Germans to miss in a shootout since Uli Stielike in 1982. Manuel Neuer had little trouble stopping Matteo Darmian’s kick, which was rolled weakly towards g

10 Schweinsteiger MISSED over the bar 2-2