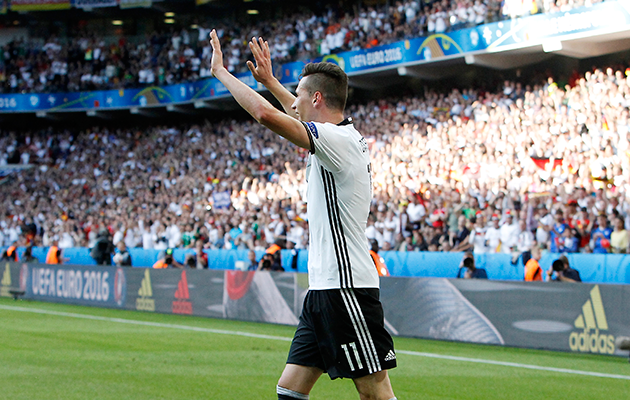 Germany cruised into the quarter-finals with a comfortable 3-0 victory over Slovakia in Lille. It the world champions’ most impressive performance of the tournament so far. They comfortably stepped up a gear to dominate a Slovakia team that had a beaten a second-string German side in a pre-tournament friendly in Augsburg.

Germany were in control from the start and took just eight minutes to take the lead through Jerome Boateng’s volley after Slovakia had failed to clear a German corner. They should have extended their lead a few minutes late when Martin Skrtel was penalised for a push on Mario Gomez. But Mesut Ozil’s poorly-disguised spot kick was pushed away by Slovakia keeper Matus Kozacik.

Slovakia enjoyed a brief spell late in the first half, when Manuel Neuer’s brilliant save denied Juraj Kucka’s header. But just as it looked as if they might find a way back into the game, Germany went down the other end and scored a second. Julian Draxler tricked his way past Kucka to the byline and pulled the ball back for Gomez to stab home.

Slovakia briefly theatened early in the second half as Germany sat back but Draxler added a third when he hooked the ball into the net after Hummels had headed on a German corner.

Jerome Boateng’s early goal for Germany, a volley from the edge of the area that took a deflection as it beat Slovakia keeper Matus Kozacik. It was the outstanding Boateng’s first international goal and from there on, there was no way back for Slovakia.

Julian Draxler, in for the disappointing Mario Gotze, provided the assist for Germany’s second goal with a fine run into the area, and then scored their third with a smart volley.

Martin Skrtel looked surprised when he was penalised for the penalty (missed by Mesut Ozil) but he was only doing what he does every game. The real surprise was that it had taken so long for an official to take action against pushing in the area – this was the first such punishment of the tournament, in match 41.