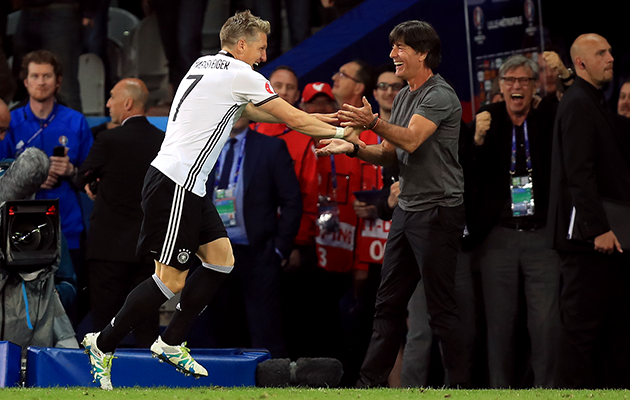 Germany opened with a 2-0 win in Lille but were far from convincing in defence without the injured Mats Hummels. His replacement, Shkodran Mustafi, scored Germany’s opening goal but was also part of a German defence that wobbled under pressure from Ukraine’s wide men in the first half. An acrobatic goal-line clearance from Jerome Boateng and some fine saves from Manuel Neuer denied Ukraine an equaliser but Germany were more comfortable in the second half when substitute Bastian Schweinsteiger added the second goal when he finished a blistering German counter-attack in injury time with virtually the last kick of the game.

Jerome Boateng’s acrobatic clearance off the line to deny Yevhen Konoplyanka, with half-time approaching and just as it looked as if Ukraine would take advantage of German uncertainties in defence. Boateng, rather than the ball, ended up in the back of the net and Ukraine then had a goal disallowed for offside as Germany limped into the break, lucky to be ahead.

Toni Kroos delivered the free-kick from which Shkodran Mustafi scored Germany’s opening goal and then led the counter-attack which ended in Bastian Schweinsteiger scoring the second in the final seconds.

Ten of Germany’s starting line-up played at the 2014 World Cup.

A tale of two Marios and a Shkodran. Germany started with Mario Gotze, instead of Mario Gomez, giving them more mobility in attack, but their opening goal came from an unlikely source in one-time Everton reject Shkodran Mustafi, who recorded his first international goal with a powerful header from Kroos’ free-kick.