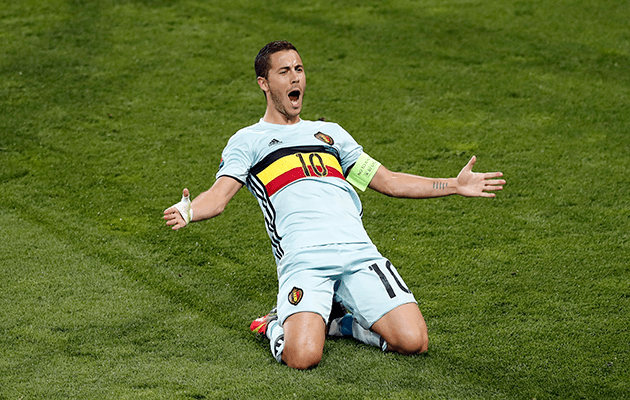 Eden Hazard inspired Belgium to a sweeping 4-0 victory over Hungary in Toulouse as Marc Wilmots’ side finally produced a performance worthy of their many talents. Captain Hazard was instrumental in a win that set up a quarter-final meeting against Wales on Friday.

Belgium took an early lead when unmarked defender Toby Alderweireld headed in Kevin De Bruyne’s free-kick in the 10th minute. The goal forced Hungary to open up and attack and Belgium were able to launch a series of counter-attacks.

Hungary goalkeeper Gabor Kiraly kept his side in the game with some splendid saves and the Hungarians had chances of their own when they pressed higher up the pitch in the second half.

But any hopes of a Hungarian revival were killed off by Hazard, who set up Belgium’s second for Michy Batshuayi and scored a brilliant third before another substitute, Yannick Carrasco, added a fourth in injury time.

A brilliant burst of acceleration and cross from Eden Hazard set up substitute Michy Batshuayi to score Belgium’s second goal with his first touch, a simple tap-in which killed off any hopes of a Hungarian revival.

Belgium captain Eden Hazard gave one of the outstanding individual performances of the tournament so far. He was behind most of Belgium’s attacks, supplying the assist for Batshuayi to score their second goal and then adding a third with a brilliant individual effort.

Eden Hazard  has had more assist in four games at the Euros than during the whole of last season for Chelsea.

Hungary lost their main creative output when Laszlo Kleinheisler limped out of the pre-match warm-up, then Zoltan Gera dropped out at half-time. But they managed an impressive rearguard action for the much of the second half, before Belgium scored a second goal to kill off any hopes of a comeback.