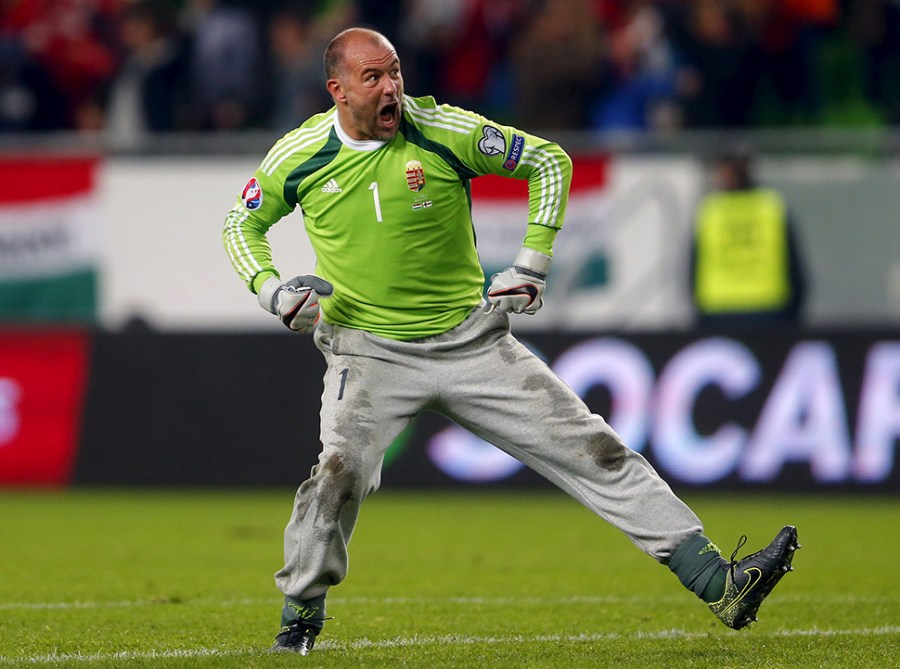 Liverpool keeper Adam Bogdan didn’t make the cut after a difficult season in England, and was replaced by Peter Gulacsi.Vanczak, with Mihaly Korhut chosen ahead of Leandro chosen for the reserve left-back slot.

Name: Denes Dibusz
Goals/caps: 4/0
Club: Ferencvaros
Age: 25 (16.11.90)
First-choice for the season’s dominant domestic club side, he is a fairly recent addition to the national side. Wears his lucky number 90 for his club side – the year he was born.

Gabor Kiraly
101/0
Szombathelyi Haladas|
Age 40 (01.04.76)
Hungary’s most-capped player of all time is set to become the oldest person to appear in the Euro finals. After spells in Germany and England, he is now back with his hometown club, where he started playing at the age of five.

Defenders
Barnabas Bese
1/0
MTK
Age 22 (06.05.94)
Young right-back who was a surprise inclusion in the squad. Called up for first time for the March friendly against Croatia.

Attila Fiola
13/0
Puskas Akademia
Age 26 (17.02.90)
Right-back who made his name at unfashionable Paks. His current club are based in the tiny hamlet of Felcsut where Hungarian prime minister Viktor Orban went to school.

Richard Guzmics
13/1
Wisla Krakow
Age 28 (16.04.87)
Centre-back who revived his international career with solid performances in the play-offs with Norway. Came through the ranks of his home-town club Haladas Szombathely.

Roland Juhasz
90/6
Videoton
Age 32 (01.07.83)
A four-time Belgian champion with Anderlecht, the centre-back has bags of experience but can be caught out for pace.

Tamas Kadar
28/0
Lech Poznan
Age 26 (14.03.90)
A league champion with Lech Poznan after five years as reserve at Newcastle United, this left-sided defender is known as “Bad Boy” by his club’s fans due to his resemblance to Jesse Pinkman in the US TV series Breaking Bad.

Adam Lang
9/0
Videoton
Age 23 (17.01.93)
Essential to Hungary’s newfound solidity in defence, he shows maturity beyond his years. Was a member of the Gyor squad that were league champions in 2013.

Leandro
16/0
Ferencvaros
Age 34 (19.03.82)
Reliable converted left-sided midfielder who is back in the national picture after returning to Ferencvaros last year. Born in Brazil, he was granted Hungarian citizenship in 2004.

Vilmos Vanczak
79/4
Sion (Swi)
Age 32 (20.06.83)
Versatile operator with 12 years’ experience in the national side. Made his top-flight debut for his hometown club Diosgyor when he was only 15.

Balazs Dzsudzsak
76/18
Bursaspor (Tur)
Age 29 (23.12.86)
Hungary’s captain sparks into life when he puts on the national shirt, making dangerous runs from the right flank. A product of Debrecen’s Italian Football School, along with international team-mates Daniel Tozser and Adam Bodi.

Akos Elek
38/1
Diosgyor
Age 27 (21.07.88)
A defensive midfielder who has regained a regular starting role in the national side after being a bit player in the pre-Dardai days. Made his debut in a 6-1 loss to Holland in 2010.

Zoltan Gera
87/24
Ferencvaros
Age 37 (22.04.79)
Attacking midfielder who made his mark in the Premier League with spectacular goals from distance for West Brom and Fulham. Set for a league-winner’s medal with Ferencvaros this season – 12 years after his last one. Needs to curb an enthusiasm that saw him pick up four yellow cards and two suspensions during the qualifying campaign.

Laszlo Kleinheisler
3/1
Werder Bremen (Ger)
Age 22 (08.04.94)
The real success story of the qualifying campaign, his goalscoring debut in Hungary’s play-off win in Norway earned him a contract with Bremen.

Adam Nagy
6/0
Ferencvaros
Age 20 (17.06.95)
This precocious two-footed midfielder earned his spurs for Hungary’s play-off games against Norway. Nagy had only played his first 90 minutes of top-flight football a month before his gaining first cap against Northern Ireland in September 2015.

Adam Pinter
19/0
Ferencvaros
Age 27 (12.06.88)
Was on the fringes of the national side while struggling for regular club football in Russia and Greece, but now back in the frame thanks to a solid season with Ferencvaros. A product of MTK’s Karoly Sandor Academy, along with international team-mates Barnabas Bese, Krisztian Nemeth and Peter Gulacsi.

Zoltan Stieber
11/2
Hamburg (Ger)
Age 27 (16.10.88)
Despite a promising start with Aston Villa’s youth and reserve teams, and impressive Bundesliga performances, he has struggled to establish himself as Hungary’s main attacking midfielder. Currently on loan at Nuremberg, he has never played first-team football in Hungary.

Daniel Bode
11/4
Ferencvaros
Age 29 (24.10.86)
Bullish forward who is a fans’ favourite at Ferencvaros and has a knack of scoring vital goals for the national team. Proved to be a game-changer in October’s qualifier against the Faroe Islands when he came on as a sub with Hungary losing 1-0 and scored twice in eight minutes.

Krisztian Nemeth
24/3
Al Gharafa (Qat)
Age 27 (05.01.89)
After a successful stint at Sporting Kansas City, earning the 2015 MLS Goal of the Year award, and at the peak of his career, he joined mid-table Qatari side Al Gharafa in January. Rose to international prominence at the 2009 Under-20 World Cup, helping Hungary to third place.

Nemanja Nikolic
17/3
Legia Warsaw (Pol)
Age 28 (31.12.87)
Hungary’s most in-form forward is by no means a regular in the national team’s starting line-up. Impressive this season at Legia, he has provided Storck with a welcome selection problem up front. Born in northern Serbia, he first played for Barcs, a village right on the border between Hungary and Croatia.

Tamas Priskin
55/17
Slovan Bratislava (Slk)
Age 29 (27.09.86)
Back in the frame after a stunning goal in Hungary’s play-off success, he has also revived his club career in Slovakia. He scored for six different English clubs, including Watford, QPR and Swansea City.

Adam Szalai
30/8
Hoffenheim (Ger)
Age 28 (09.12.87)
Out in the wilderness following a controversial press conference in 2013, he was recalled to the international fold by previous coach Pal Dardai. Joined Hanover on loan in January. Acted as a barman at the play-off party in Budapest, buying drinks for hundreds of celebrating fans.