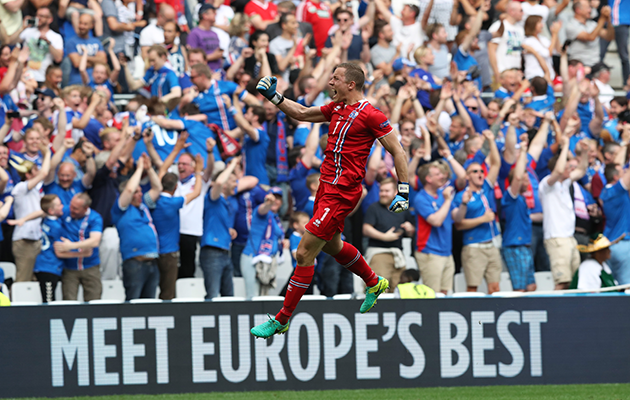 An own goal by defender Birkir Saevarsson denied Iceland a first European Championship victory after they drew 1-1 with Hungary in Bordeaux. Iceland had taken the lead in the first-half  thanks to a controversial defender and had defended valiantly for most of the second half. But a cross Hungarian substitute Nemanja Nikolic’s cross was turned into his own net by the unfortunate Saevarsson in the 88th minute.

Iceland’s opening goal, penalty converted by Gylfi Sigurdsson after Hungary keeper Gabor Kiraly had spilled the ball. In the scramble to clear the ball, Tamas Kadar adjudged to have fouled Aron Gunnarsson but it was a harsh decision.

Gylfi Sigurdsson put Iceland ahead after a harsh penalty award, but his namesake Ranar had kept Iceland in the game with a series of important challenges

Hungary’s black-shirted fans celebrated their late equaliser as if it were the winner. But earlier riot police had been called into the stand at Marseille’s Stade Velodrome after the Hungarians clashed with stadium stewards.