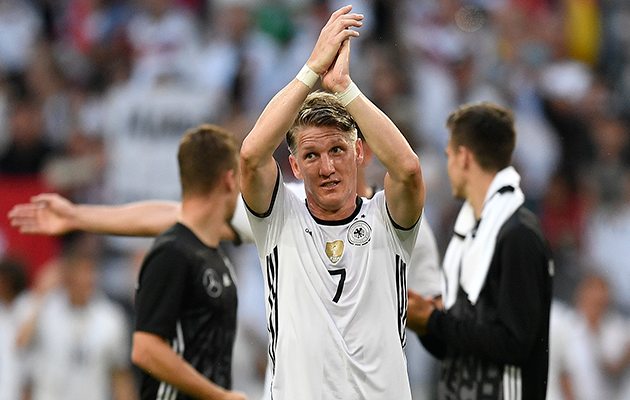 1. No commander on board for the big kick-off.
Nationalmannschaft captain, Bastian Schweinsteiger, has revealed he is highly unlikely to start  Germany’s Euro 2016 opener against Ukraine next weekend.

The Manchester United midfielder, who had been out since March after damaging medial knee ligaments, made his competitive comeback as a second-half substitute in Saturday’s friendly win over Hungary, but admitted that the best he could hope for in Lille was another cameo.

“I’m still not fit enough for 90 or 120 minutes,” he told a ZDF TV reporter after the game. “However, I’m definitely fitter than I was before the 2014 World Cup, when I couldn’t do anything.”

Schweinsteiger also went into that tournament debilitated by knee trouble and prior to blossoming in the knock-out phase, had to be nursed along.

A widely-held view among the German punditerati is that national coach, Joachim Löw is flogging a dead horse with the battered body of his skipper. The Bundestrainer, though, begs to differ.

“He gives the team a sense of security through his personality,” he said

2. Is Löw going to play it safe at right-back?
That would be the assumption following the Bundestrainer’s decision to play Schalke’s Benedikt Höwedes on the right-side of the back-four for mthe entirety of the Hungary warm-up game.

Back in the German starting line-up for the first time in over a year, the 28-year-old Höwedes can play full-back – indeed he featured throughout Brazil 2014 at left-back – but in truth, is only genuine international class in a central defensive role. Yes, he’s solid. Yes, he’s tough and uncompromising. However going forward, he has severe limitations and up against teams who sit deep and defy, offers few solutions on the overlap.

A far better alternative in that position would be Bayern Munich utility wunderkind, Joshua Kimmich, who with his dynamism, technical class and composure has all the makings of the ‘next Philipp Lahm’.

Over to you Herr Löw.

3. Weinzierl and Schalke walk down the aisle.
The worst-kept coaching appointment secret finally is official – that Markus Weinzierl, formerly of the FC Augsburg parish, is to take over next week as Schalke’s technical area evangelist

In his four years in charge at FCA, Weinzierl performed wonders, first staving off Bundesliga relegation, then leading therm to the heady heights of a fifth-place finish in 2014-15 and qualification for the Europa League.

With their excellent defensive organisation and lightning-fast counters, Weinzierl’s Augsburg had a happy knack of cutting big teams down to size. But how will the genial Bavarian fare now the boot is on the other foot in Gelsenkirchen, where bloated expectations and in-house volatility makes the job of ‘Trainer’ a dancing on a volcano affair. During the past decade, Schalke have chewed up and spat out no fewer than ten coaches and only one of those (Mirko Slomka: 2006-08) lasted more than two years in situ.

One of Weizierl’s top priorities will be to bed in a new lead wolf striker, someone to take the place of soon-to-depart Dutchman, Klaas-Jan Huntelaar. 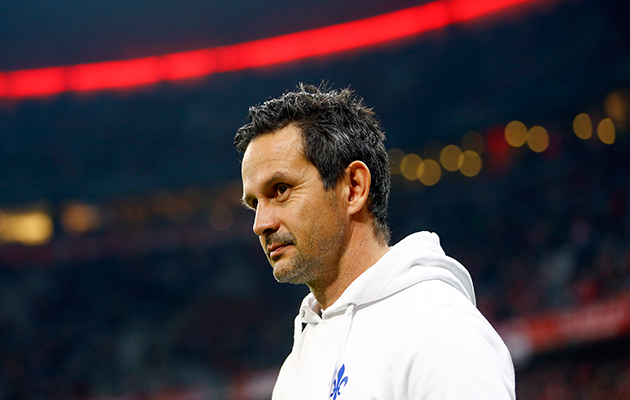 Darmstadt’s over-achieving underlings very much find themselves at a crossroads following the decision of inspirational coach, Dirk Schuster, to bid farewell to the Hesse outfit and sign on the dotted line for Augsburg.

Responsible for the mother of all seas changes at Darmstadt, their wondrous evolution from third division nobodies to successful Bundesliga inductees, Schuster’s departure from the Böllenfalltor leaves a huge void and the pressure certainly is on chairman Rüdiger Fritsch and newly-appointed director of sport, Holger Fach to find a worthy substitute. A mission some might call impossible. After all, Schuster was the ultimate multi-tasker: coach, tactician, motivator, recruitment officer and scout. Their heart and soul.

5. Bartra: Blaugrana to Schwarz-Gelben
Just three weeks after completing the 38 million euro sale of skipper and centre-back Mats Hummels to Bayern Munich, Dortmund appear to have made the necessary repairs with the acquisition of Barcelona’s young Spanish international, Marc Bartra, who because of a lack of playing time this term (a mere nine starts) had his release clause slashed from 40 million euros to eight million.

Bartra, an intelligent, ball-playing defender in the Hummels mould, is a rare breed. Only Barca’s fifth-choice centre-back behind Pique, Mascherano, Mathieu and Vermaelen. Yet very much a favourite of Spain boss, Vicente del Bosque. Great business by Dortmund.

Simply quicker on the draw than other such interested parties as Liverpool, Sevilla, Villarreal and Fiorentina.