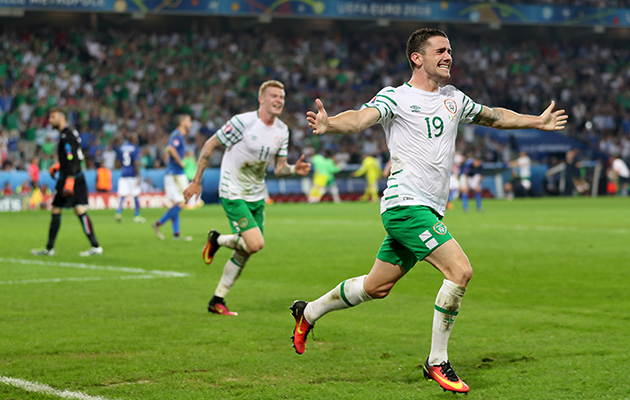 Robbie Brady’s late header sent the Republic of Ireland into the knockout stages of the European Championship for the first time after a 1-0 win over a much-changed Italy side in Lille. Ireland will play hosts and favourites France in Lyon next Sunday.

Brady’s goal parked wild celebrations among the thousands of noisy Irish fans who dominated the crowd in Lille but it was nothing more than the Republic deserved. Ireland had strong claims for a penalty when James McClean was shoved by Federico Bernardeschi late in the first half. But Romanian referee Ovidiu Hategan was unimpressed and the Republic, despite being far the better side in the first half, went in goalless at the break.

Ireland controlled possession but much of the game but needed to take their chances when they came along. It seemed unlikely that they could keep such high energy levels up for the whole of the second half in a hot, humid atmosphere played under a closed roof in Lille.

Italy coach Antonio Conte made nine changes from the side that had beaten Sweden and the defeat took a little wind from their sails ahead of their second-round match against Spain in Paris next Monday. Substitute Lorenzo Insigne had his team’s best chance when he hit a post with a fierce shot in the 76th minute. The Azzurri looked as if they might steal a late winner and keep intact their record of not conceding in the knockout stages. But Ireland substitute Wes Hoolahan had other ideas. His looping cross into the Italian area was met by Brady’s header – and Ireland were in the knockout stages as one of the best third-placed teams.

Robbie Brady’s 85th-minute winner for Republic of Ireland, rising between Italy’s defenders to head Wes Hoolahan’s cross past keeper Salvatore Sirigu. Just as it looked as if Ireland might flag and Italy’s attacking substitutes might steal a late winner, the Norwich City midfielder’s goal sent Martin O’Neill’s side into the knockout stages.

Midfielder James McCarthy typified Ireland’s energtic approach against an Italy side that had already qualfied for the knockout stages as group winners.

The defeat for Italy meant no team reached the knockout stage with a 100 per cent record.

Centre-backs Leonardo Bonucci, captain in the absence of the rested Gianluigi Buffon, and Andrea Barzagli were the only two Italians from the Sweden starting line-up to begin the final group match in Lille. For Italy coach Antonio Conte, playing Bonucci was gamble as the Juventus defender was a booking away from missing the Spain game.