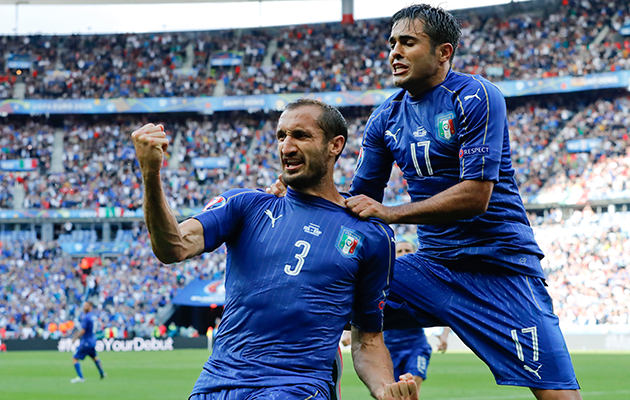 Defending champions Spain are out of Euro 2016 after being taught a tactical masterclass by Italy, who won 2-0 at the Stade de France thanks to goals from Giorgio Chiellini and Graziano Pelle. Italy gained revenge for their 4-0 defeat at the hands of Spain in the Final four years ago and they did so by outplaying, out-thinking and out-fighting the champions.

Spain were overwhelmed by Italy’s hard-pressing approach in the first half. They failed to get their short-passing game going in midfield and struggled to deal with long balls to Italy’s forwards. David De Gea made a series of fines saves but then spilled Eder’s free-kick, allowing Emanuele Giaccherini to punce and set up Chiellini for the opening goal.

Alvaro Morata should have scored with an unmarked header but directed his effort straight at Buffon as Spain showed signs of recovery in the second half. The Spanish had further chances but substitute Aritz Aduriz shot wide, Sergio Ramos headed over and Lucas Vasquez was offside as he hit a post.

It was not all one-way traffic. Eder, through on goal, saw his shot blocked by De Gea but Turkish referee Cuneyt Cakir was in danger of losing control. He let Pique’s clumsy bodycheck of Eder go unpunished and was then fooled by Cesc Fabregas feigning injury to get Pelle booked.

Andrea Iniesta’s volley was tipped over by the majestic Gianluigi Buffon, who also denied Pique at the death. Italy then broke and grabbed a second, decisive goal through Graziano Pelle. Italian celebrations could begin, but the Spanish era of Euro domination was over.

Giorgio Chiellini’s opening goal for Italy. The defender bundled the ball over the line after Eder’s free-kick has been spilled by David De Gea. Despite making some excellent saves that kept Spain in the game, De Gea should have done better. The goal was the first goal conceded by Spain in the knockout phase of a tournament since 2006.

Emanuele Giaccherini covered more ground than any other player and played a crucial role in Italy’s goal, nicking the ball away from David De Gea and into the path of Giorgio Chiellini.

This was the sixth European Championship meeting between Italy and Spain, making it the most common encounter in Euro finals history.

Italy coach Antonio Conte was a livewire presence on the touchline, kicking every ball, sometimes literally when Giaccherini miscontrolled. Tactically, Conte “did a job” on Spain. Giaccherini was hard to pin down and the Italian forwards’ pressing of Sergio Busquets broke up Spain’s normal short-passing game

In contrast, Vicente Del Bosque, in what proved to be his final game in charge of Spain, picked an unchanged side and his substitutions were underwhelming, with midfielders Koke and Thiago remaining on the bench.