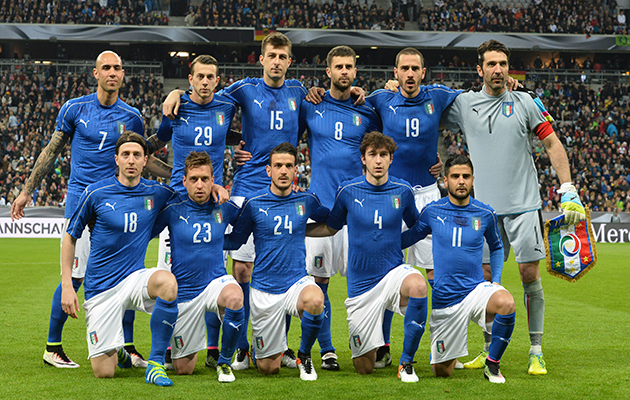 Striker Vidar Orn Kjartansson did not make the final 23 but was placed on standby. Instead midfielder Runar Mar Sigurjonsso, had not expected to be fit, was included, with Eidur Gudjohnsen listed as a forward.

In defence Sverrir Ingi Ingason, who had been injured and was not expected to be ready for the Euros, made it ahead of Solvi Ottesen.

Gianluigi BUFFON
156/0
Juventus
Age 38 (28.01.78)
The most capped Italian of all time, he is an ideal captain: inspirational on the pitch and clued up off it.

Salvatore SIRIGU
15/0
Paris Saint-Germain (Fra)
Age 29 (12.01.87)
Has lost his place at PSG to Germany’s Kevin Trapp but is likely to retain Conte’s trust. In and around the Italy squad for the past six years.

Leonardo BONUCCI
55/3
Juventus
Age 29 (01.05.87)
Tough character who once flattened an armed robber outside a Turin car showroom.  Solid, elegant defender who is able to initiate attacks.

Giorgio CHIELLINI
82/6
Juventus
Age 31 (14.08.84)
An automatic first choice for the last decade, he was a key element in Conte’s Juve and can play left-back in central defence.

Mattia DE SCIGLIO
22/0
Milan
Age 23 (20.10.92)
Has plenty of pace and can play on either flank. Milan’s much improved second half of season form will has done his prospects no harm.

Angelo OGBONNA
10/0
West Ham
Age 28 (23.05.88),
Around the Italy team since making his debut in November 2011, Ogbonna can hardly be considered a surprise.  Helped his cause with a generally impressive first  season in the Premiership with West Ham.

Federico BERNARDESCHI
2/0Fiorentina
Age 22 (16.02.94)
An attacking midfielder who made his debut in March in the friendlies against Spain and Germany. Looks to have a bright future.

Antonio CANDREVA
36/3
Lazio
Age 29 (28.02.87)
His main job is to get down the right flank and provide the ammunition for Pelle, but is much more than just a decent crosser.

Alessandro FLORENZI
15/2
Roma
Age 25 (11.03.91)
Essentially an attacking midfielder but plays at right-back for his club. Scored from 60 yards against Barcelona in the Champions League last autumn.

Emanuele GIACCHERINI
23/3
Sunderland (Eng)
Age 31 (05.05.85)
A regular under Cesare Prandelli, but lost place after moving to England. Back in Italy on loan at Bologna.

Marco PAROLO
18/0
Lazio
Age 31 (25.01.85)
Classic, hardworking defensive midfielder who gets forward to effect. Involved in the qualifiers and at the heart of Lazio’s Europa League run.

Stefano STURARO
0/0
Juventus
Age 23 (09.03.93)
Uncapped Sturaro represents not only the biggest surprise in Conte’s squad but also indicates much of his Euro 2016 gameplan.   Deprived by injury of quality players such as Verratti and Marchisio in midfield, he has opted for the solid, physical and above all versatile qualities of the Juventus man.

EDER
9/2
Sampdoria
Age 29 (15.11.86)
On loan at Internaziionale, the Italo-Brazilian  became the 43rd “oriundo” (foreigner of Italian origins) to play for Italy when making his debut.

Stephan EL SHAARAWY
18/3
Milan
Age 23 (27.10.92)
In an unsettled season, he joined Monaco on loan in the summer and then Roma in January. The son of an Egyptian who married an Italo-Swiss woman.

Lorenzo INSIGNE
8/2
Napoli
Age 24 (04.06.91)
Just 5ft 4in but able to look after himself. Has had a great season alongside Gonzalo Higuain in Serie A.

Graziano PELLE
11/4
Southampton (Eng)
15 July 1985 (age 30)
Central target man who has spent much of the Premier League season on the bench but could lead Conte’s attack.