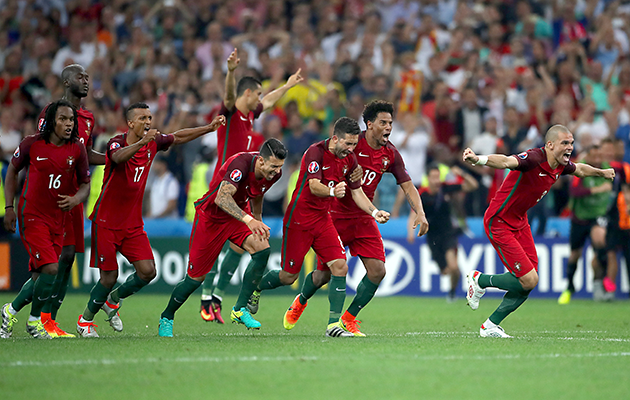 Ricardo Quaresma scored the winning spot-kick as Portugal beat Poland in a penalty shoot-out in Marseille to reach the semi-finals where they will play Wales or Belgium next Wednesday in Lyon.

Portugal reached the last four of the tournament despite not winning any of their five matches in regulation time, and having been held to a 1-1 draw by a Polish side that took an early lead through Bayern Munich striker Robert Lewandowski, who ended a goal drought stretching back 646 minutes.

Portugal had been stunned by Lewandowski’s early goal, scored after less than two minutes, the Bayern Munich striker sidefooting Kamil Grosicki’s cross home after Portuguese right-back Cedric had misjudged the bounce of a long ball. 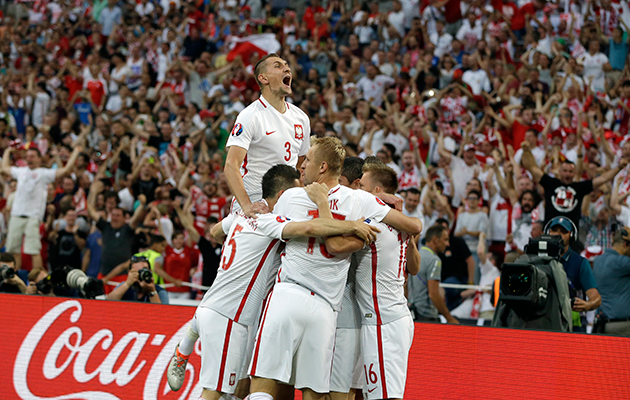 The early goal gave Poland an obvious boost and they played some confident football, Grzegorz Krychowiak winning the midfield battle and Lewandowski, Grosicki and Arkadiusz Milik linking well in attack. Portugal could not rely on their misfiring captain Ronaldo, who sent a poor effort at Poland keeper Lucasz Fabianski after setting himself up with a neat dummy. Midway through the first half, for the umpteenth time in the tournament, a Ronaldo free-kick from 35 yards failed to clear the defensive wall. His frustration increased when a clear push by Michal Pazan in the area was ignored by German referee Felix Brych.

It took a fierce shot from the impressive Renato Sanches to drag Portugal back into the game. The teenager, starting for the first time in the tournament, exchanged passes with Nani and his curler from the edge of the area took fizzed off Krychowiak as it flew past Fabianski for the equaliser.

Ronaldo spurned further chances in the second half. He shot wide when he should have crossed for Nani and then fluffed his shot when presented with a cross from Nani.

Milik went close for Poland when he beat Pepe to the near-post but saw his close-range shot snaffled by Rio Patricio. The Poles were in need of fresh legs but coach Adam Nawalka did not make a change until the 82nd minute.

Aside from a Milik shot that whistled wide for Poland, Portugal were the marginally more adventurous side in extra time, but could not find their way through a Polish defence that had only conceded two goals in five tournament matches.

The most exciting incident in extra-time was when a pitch invader tried to get close to Ronaldo. But security quickly shackled him and carried him away.

The Poles were prepared to wait for penalties. But after seven well-dispatched spot-kicks, Jakub Blaszczykowski saw his shot pushed away by Rui Patricio. Ricardo Quaresma stepped up to score the winning penalty and send Portugal into the semi-finals.

With Poland tiring, Ronaldo had a chance to settle the game within regulation time when a ball was lofted into area by Joao Moutinho in the 86th minute. But Portugal’s captain snatched at thin air, the ball bounced through to Fabianski and the game went into extra time and penalties. 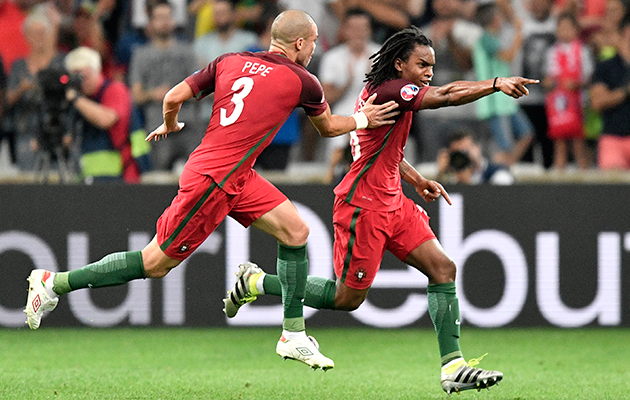 A star is born…Renato Sanches levels for Portugal.

Renato Sanches repaid the faith of coach Fernando Santos, who gave him his first international start, with an excellent performance. The teenager dragged Portugal back into the game with a stunning equalising goal and struck a confident penalty in the shoot-out.

For the fifth successive match at Euro 2016, Portugal were level at 90 minutes. They reached the semi-finals without winning a game.

Four years ago, during Portugal’s Euro 2012 semi-final penalty shoot-out against Spain, Ronaldo opted to take his side’s final spot-kick – and was denied the opportunity because his team-mates missed their earlier kicks to hand victory to Spain. This time around, he took a decisive first kick for Portugal and that set the tone for the rest of the shoot-out.

However, for most of the previous 120 minutes, Ronaldo had cut a sorry figure, missing a number of chances, including yet another ambitious long-range free-kick.