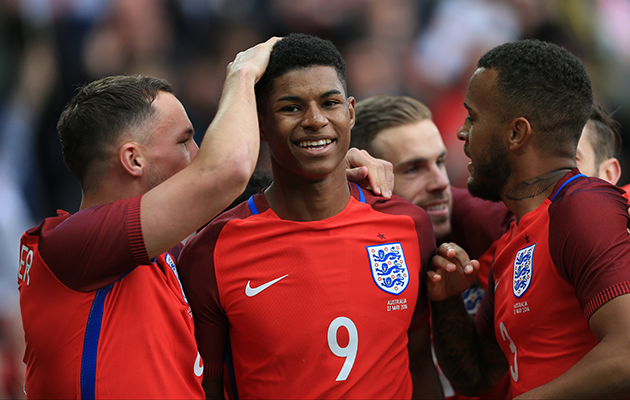 Rashford was chosen in Roy Hodgson for England’s Euro 2016 squad after breaking through into the Manchester Utd first team and scoring on his international debut.

England travel to France with five forwards and Hodgson has hailed the prospect’s qualities.

“He’s had that fantastic end to the season. He has special qualities,” said the England boss.

England captain Wayne Rooney – who is no stranger to making an international breakthrough at a young age – also lauded his club teammate Rashford saying:

“The way he has performed has been incredible, really.

“He showed what he can do on his first game for England.”

Hodgson was also saddened to leave out Andros Townsend and Danny Drinkwater calling it a difficult choice.

He said: “It was a very difficult choice. It was tough and in some ways I am satisfied I have the 23 I want to take.”

When questioned whether the England squad was top heavy, Hodgson dismissed this and said the balance between defence and attack was right.

He said: “The balance is good. If anything, it is tilted towards an offensive approach.

“We believe defending is a team job.”