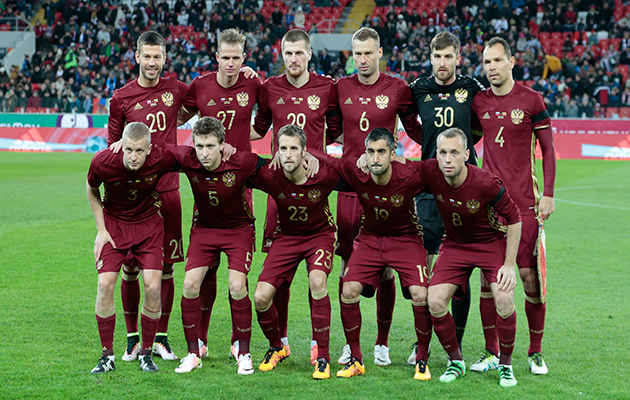 Injuries to key midfielders Alan Dzagoev and Igor Denisov deprived Russia of their first-choice central midfield, while Yuri Zhirkov was dropped after a reported fallout with coach Slutsky. Oleg Kuzmin and Alex Kerzhakov (both unfit) failed to make the final 23, as did Dmitri Tarasov.

German-raised Roman Newstadter was the headline-grabbing call-up, joining the defence along with Georgi Schennikov and Roman Shishkin. Denis Glushakov and Aleksandr Golovin replaced the injured men in midfield, while Artur Yusupov got a late call: he happened to be on holiday and staying at the same Monaco hotel as the squad.

Name: Igor AKINFEEV
Caps/goals: 86/0
Club: CSKA Moscow
Age: 30 (08.04.86)
First choice for a dozen years despite high-profile errors such as the goal against South Korea in the 2014 World Cup. Saved a penalty on his debut for CSKA as a 16-year-old and at 18 was Russia’s youngest-ever keeper.
GUILHERME
1/0
Lokomotiv Moscow
Age 30 (12.12.85)
Born in Brazil, he received a Russian passport in November after eight seasons with Lokomotiv and became the first player born outside Russia to represent the national side when making his debut against Lithuania in March. Started his career as a futsal keeper.

Yuri LODYGIN
10/0
Zenit
Age 26 (26.05.90)
Born in Russia but moved to his mother’s Greek homeland aged 10 and capped by Greece at under-21 level. Turned down a call-up to the senior squad and made his debut for Russia in 2013. His style of goalkeeping has been compared to that of Manuel Neuer.

Alexei BEREZUTSKI
57/0
CSKA Moscow
Age 33 (20.06.82)
Mostly used as a back-up for both club and country although his presence is said to benefit the team spirit of both. Former CSKA boss Valeri Gazzaev said he could only initially only tell him from his twin brother Vasili by the colour of his boots.

Vasili BEREZUTSKI
93/4
CSKA Moscow
Age 33 (20.06.82)
Older than his twin brother Alexei by 20 minutes, he is not the quickest central defender but is good in the air and has scored some important goals. Has captained the side on occasion, but missed Euro 2012 due to a thigh injury.
Sergei IGNASHEVICH
115/8
CSKA Moscow
Age 36 (14.07.79)
Russia’s most-capped player of all time, the veteran centre-half compensates for a lack of speed with his reading of the game. Strong in the air, he passes well over distance and has a powerful shot.
Dmitri KOMBAROV
38/2
Spartak Moscow
Age 29 (22.01.87)
Attacking left-back who can also play wide in midfield. His twin brother Kirill is also on Spartak’s books.

Roman NEUSTADTER
1/0
Schalke (Ger)
Age 28 (18.02.88)
Centre-back called up in May after receiving Russian citizenship. Born in Ukraine, raised in Germany.

Roman SHISHKIN
10/0
Lokomotiv Moscow
Age 29 (27.01.87)
Right-back who made the squad because of Oleg Kuzmin’s injury. Recalled in 2015 after a spell out.
Igor SMOLNIKOV
12/0
Zenit
Age 27 (08.08.88)
Pacy, attacking right-back who has become one of the Russian league’s top performers since moving from Krasnodar to in 2013.
Dmitri TORBINSKI
28/2
Krasnodar
Age 32 (28.04.84)
Midfielder who has been converted to a defender, he scored the winning goal against Holland in the Euro 2008 quarter-finals. Uncompromising competitor but has a discipline problem.

Denis GLUSHAKOV
42/4
Spartak Moscow
Age 29 (17.01.97)
Defensive midfielder who is likely to play an important role following the injuries to Dzagoev and Denisov.
Oleg IVANOV
3/0
Terek Grozny
Age 29 (04.08.86)
A member of the bronze-medal winning squad at Euro 2008 although he didn’t make his international debut until seven years later. Failed to make the grade at Spartak, but several big Moscow clubs have recently shown interest.
Pavel MAMAEV
10/0
Krasnodar
Age 27 (17.09.88)
Heavily tattooed creative midfielder who was reported to be on his way to Manchester United in 2012 until a lack of caps prevented his move from CSKA.
Alexander SAMEDOV
28/3
Lokomotiv Moscow
Age 31 (19.07.84)
Right-winger who opted to represent Russia after being courted by Azerbaijan, his father’s country of birth. Owns a restaurant in Moscow that is popular with his team-mates.
Oleg SHATOV
21/2
Zenit
Age 25 (29.07.90)
A former futsal player who is considered to be one of the Russian league’s most technically skilled players. A key creative figure, he is often compared with Andrey Arshavin, who he
replaced at Zenit and in the national team.
Roman SHIROKOV
53/13
CSKA Moscow
Age 34 (06.07.81)
National captain, he joined CSKA on a six-month deal in February after his contract with Spartak was ended by mutual consent the previous month. Won the Russian Premier League twice and the 2008 UEFA Cup with Zenit. Noted for his sharp interviews and Twitter comments.

Artur YUSUPOV
2/0
Zenit
Age 26 (01.09.89)
On holiday at the same Monaco hotel as the Euro squad when he got the call to replaced the injured Denisov.

Artem DZYUBA
16/8
Zenit
Age 27 (22.08.88)
Powerful centre-forward who, at 6ft 5in, scores a large percentage of his goals in the air and was Russia’s top scorer during qualifying. Spent nine years at Spartak without ever establishing himself in the starting line-up.

Aleksandr KOKORIN
37/11
Zenit
Age 25 (19.03.91)
Regarded as his generation’s most talented striker but yet to live up to the hype. Slutsky, however, has faith in him still – especially after his January move from Dynamo to Zenit, where his partnership with Dzyuba could be replicated for the national side.

Fedor SMOLOV
12/5
Krasnodar
Age 26 (09.02.90)
Joined Krasnodar last year after spells on loan at Feyenoord and Anzhi while with Dynamo. Formerly married to Russian beauty queen Victoria Lopyreva, he is still often referred to as “Lopyrev”.