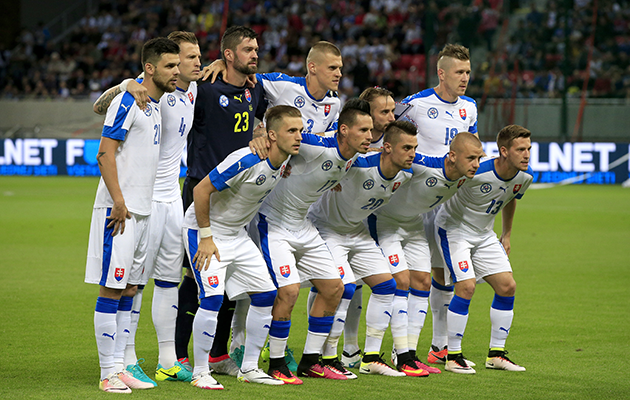 The country’s all-time top scorer, Robert Vittek, has surely said goodbye to his international career after being ruled out of the tournament by injury. Martin Dubravka was not selected, while Lukas Tesak and Erik Sabo were cut from the provisional 27-man squad.

The 21-year-old centre-back Milan Skriniar was a surprise inclusion, having had little playing time in Serie A this season.

Jan Mucha
45/0
Slovan Bratislava
Age 33 (05.12.82)
One of the heroes of the 2010 World Cup but has now lost his place to Kozacik. Likes snowboarding in the mountains and also has a pilot’s licence.

44/0
Tomas Hubocan
Dynamo Moscow (Rus)
Age 30 (17.09.85)
Joined Dynamo from Zenit, where he replaced Martin Skrtel in 2008 and scored a fourth-minute own goal in his European debut for the club.
Peter Pekarik
65/2
Hertha Berlin (Ger)
Age 29 (30.10.86)
National right-back for 10 years, he picked up an unexpected Bundesliga winner’s medal in his first season abroad, for Wolfsburg in 2009.
Kornel Salata
36/2
Slovan Bratislava
Age 31 (24.01.85)
A veteran of the World Cup campaign, he was born the Slovak-Hungarian border but opted against playing for Hungary.

Milan Skriniar
2/0
Sampdoria (Ita)
Age 21 (11.02.95)
A surprise inclusion in the squad after making only three appearances for Sampdoria this season.
Martin Skrtel
79/5
Liverpool (Eng)
Age 31 (15.12.84)
National captain known as “The Terminator” he is ruthlessly competitive and scores the occasional spectacular volley.
Dusan Svento
36/1
Cologne (Ger)
Age 30 (01.08.85)
Left-sided defender or midfielder who has been a squad member for a decade without claiming a regular staring place. Czech and Austria league winner.

Milan (Ita)
Age 29 (26.02.87)
Workhorse in midfield who links defence with attack. Had only played one minute of tournament football when picked start against Italy in the 2010 World Cup.
Robert Mak
26/7
PAOK (Gre)
Age 25 (08.03.91)
Right-sided attacker-cum-midfielder who, as a teenager, played with Slovakia team-mate Vladimir Weiss at Manchester City’s youth academy.
Viktor Pecovsky
30/1
Zilina
Age 33 (24.05.83)
Had to wait until he was 29 to make the national team but has been near ever-present since. No player in the side is more unsung than the right-sided midfielder.
Stanislav Sestak
63/13
Ferencvaros (Hun)
Age 33 (16.12.82 (age 33)
A title winner a decade ago with Zilina and now a champion Hungary this term. Can play as wide midfielder or in attack.
Miroslav Stoch
52/6
Fenerbahce (Tur)
Age 26 (19.10.89) Bursaspor
Already has seven years international experince, former Chelsea left-sided player who is currently on loan at Bursaspor in Turkey.

Michal Duris
23/3
Viktoria Plzen (CzR)
Age 28 (01.06.88)
Top scorer for Czech league leaders Viktoria Plzen this term, he is yet to score in a competitive international.