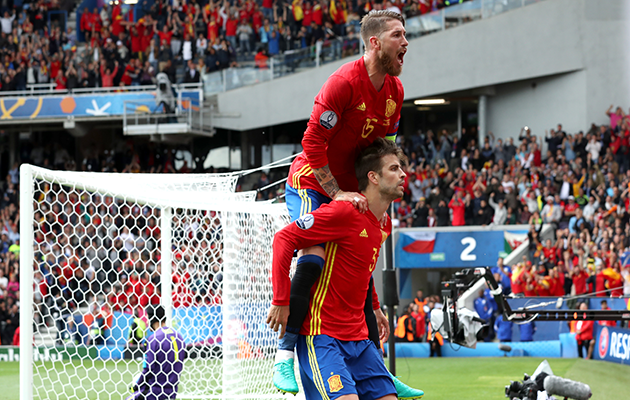 Spain took a while to get going but once they found their passing range they were able to pin the Czech Republic back in their own half for almost the entire game. Prompted by the peerless Andres Iniesta, chances were created, but a resolute Czech Republic defence kept the the holders at bay. A draw looked on the cards until, with three minutes remaining, Iniesta lofted an inch perfect cross on to the head of Gerard Pique to secure Spain the points.

Key moment:
The Czech Republic offered little going forward, but midway through the second half, with the scoreline still 0-0, they came close to taking the lead. It took a marvellous piece of defending from the alert Cesc Fabregas to hook the ball away from under his own bar to deny the lurking Tomas Necid a certain goal.

Andres Iniesta was the outstanding player on the pitch. As the senior player in the Spanish midfield he assumed responsibility and always looked the man most likely to unlock a dogged Czech Republic defence. Capped a typically dynamic performance with a wonderfully weighted cross for the Spain goal.

David Silva won his 100th cap for Spain. Along with Sergio Ramos, Andres Iniesta and Cesc Fabregas, he was one of four centurions in Vicente del Bosque’s starting XI. All four were survivors of the Euro 2008 winning team; a fifth, Iker Casillas, was on the bench.

In 2012 Spain pioneered the strikerless formation. Four years on and coach Vicente del Bosque still seems no closer to unearthing a frontman for the post-David Villa era. Alvaro Morata started before being replaced by the veteran, Aritz Aduriz, but neither man inspired confidence for the greatr challenges that lie ahead.