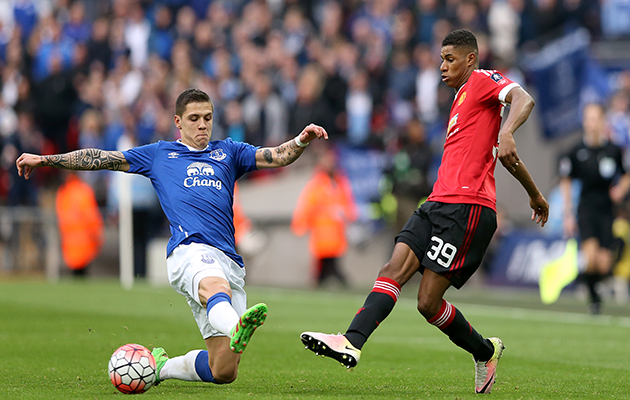 Also included are midfielders Jack Wilshere and Jordan Henderson, both of whom have only just returned from injury, but there is no place for Arsenal forward Theo Walcott.

Rashford’s inclusion represents a major breakthrough for a teenager who only made his debut for United in February and has scored seven goals in 16 matches.

“[Rashford is] one of the contenders, of course,” said Hodgson, who will trim his squad down to 23 players by May 31. “The competition is quite strong, he’ll understand that. He deserves to be selected in this larger squad.

“It will be interesting to see what he can do, it may only be for one week, but I am pleased that he has had such a good end to the season. It’s great to be able to include him. There’s no reason why he can’t knock someone off their perch, but it will be harder than some people might expect.”

Hodgson watched Wilshere make his first start in almost a year in Arsenal’s 4-0 victory over Aston Villa and while it was just a third appearance of the season for the 24-year-old, he was a mainstay of the qualifying campaign. Likewise Henderson, who returned to the Liverpool starting line-up on Sunday after missing over a month with a knee injury.

Walcott, whose England career dates back to the 2006 World Cup but who missed out on the subsequent two World Cups, again misses out on a major tournament. Meanhile Andros Townsend, who last played for England in October, is preferred despite the his side, Newcastle, suffering relegation.

Danny Drinkwater, who made his international debut in England’s friendly match against Holland in March, earns a place by virtue of his key role in Leicester City’s title-winning season.