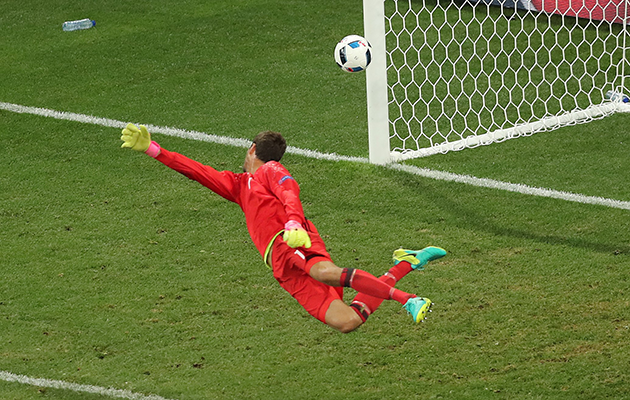 Belgium are through to the knockout stages as Group E runners-up after a late Radja Nainggolan goal earned them a 1-0 win over Sweden in Nice. The defeat means Sweden are out and also marks the enf of Zlatan Ibrahimovic’s international career – the striker having annoucned he would retire at the end of the tournament.

In an open, entertaining match that Sweden had to win if they were to go through to the knockout stages, it was always Belgium who looked the more likely to score. Hazard, De Bruyne and especially Lukaku squandered chances to win the game before Radja Nainggolan scored with a wonderfully-hit strike from the edge of the penalty area. On the balance of play it was the correct outcome as a workmanlike Sweden, notwithstanding the mercurial talents of Ibrahimovic, lacked the creativity to threaten Thibaut Courtois in the Belgian goal.

Belgium march on but just as in 2014 the impression remains that they are considerably less than the sum of their parts.

Radja Nainggolan killed off Sweden’s hopes and demonstrated a rare moment of class in a match that was high on thrills, but low on quality.

Sweden’s Andreas Isaksson was by far the busier of the two keepers and he pulled off a number of exceptional saves to keep Belgium at bay. Powerless to prevent Nainggolan’s late winner.

The final whistle in Nice marked the end of Zlatan Ibrahimovic’s international career that has spanned 15 years, 115 matches, and brought him a record haul of 62 goals.

Belgium are through to the last 16, but once again they made hard work of it against an ordinary Sweden team. In De Bruyne, Hazard and Lukaku, the talent and goal potential is unquestionably there, but the suspicion remains that coach Marc Wilmots is simply incapable of getting the best out of his players.